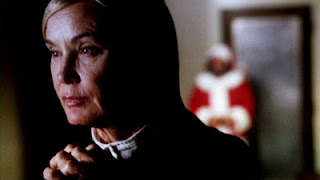 --In the name of professionalism, I shall keep writing, even though this ep was basically a blip. The thing about Christmas episodes is that they tend to focus more on one-shot holiday hijinks than actual plot momentum. Of course, you know that this particular take on Christmas is gonna make Bing Crosby turn over in his grave, and sure enough, the episode was basically a 45-minute raping of the holiday spirit, from the opening bloodbath to the tree decorated with false teeth, human hair, and IV bags. It was nihilistic, it was perversely fun, and not much happened, really. I’ll let that go this one time. Because it’s Christmas.

--Mmm, Ian McShane. Some people were just born to play bad. The craggy face, the drunken-Shakespeare voice -- you can’t picture him as a romantic hero, but you can sure as hell picture him attempting to violate a nun. McShane played Leigh Emerson, a man imprisoned for minor crimes one lonely Christmas, then gang-sodomized by prison guards. The result? He snapped, and in 1962, he donned a Santa suit and went on a Christmas Eve murder spree. He’s been rotting away in Briarcliff ever since, but for this ep, he got to run amok one last time as part of Evil Eunice’s rather convoluted scheme to get rid of her enemies. Kinda nice, to get a reminder that Sister Jude has, in the past, been a gigantic bitch who’d torment a man, even a psychotic man, with little care for curing him. She threw Emerson into the darkness and tonight, it came back to haunt her. Locked in by Evil Eunice and savaged by Emerson, Jude had the strength to stab and kill the brute, but now what? One demon is dead, but Jude’s still more or less at the mercy of a greater foe. Or foes. Because...

--Arden’s as evil as ever. Who else would think a set of ruby earrings that had repeatedly passed through a death camp victim’s digestive tract would make a lovely holiday gift? Arden may be pissed that he no longer has his perverted psycho-sexual-religious-daddy fantasies about Eunice, but he fears her more than he hates her. Poor Jude should’ve realized, but when Arden came seeking her help in dealing with Eunice, her pride and ego were just intact enough that she fell for it. It was a double-cross, of course, all designed to get Jude locked in with Emerson. Okay, I have to finally say it: I am not a fan of James Cromwell’s performance as Arden. It’s not really his fault; dude’s one hell of an actor. But Arden is a very one-note character, more ghastly archetype than human, and Cromwell’s perpetually bitchy, pissed-off delivery has worn thin with me. I almost wish they’d killed him off in the first act; let him do his mad doctor bit and then pass the reins entirely over to more entertaining villains Evil Eunice and Thredson. Buuuuut, you don’t hire James Cromwell and not go for your money’s worth, so I’ll suffer in silence from now on. Maybe.

Other, more relevant stuff that happened:

--Grace’s body was alien-snatched as Arden attempted to dispose of her in the Death Chute. Wonder if the aliens are gonna occupy her form or something. Also, Arden sure is calm considering all the crazy, impossible-to-explain shit he keeps bumping into. Spider-legged microchips, telekinetic nuns, body-snatching lights...all in a Nazi’s day’s work.

--Lana and Kit have become a super-team, yay! Good thing, since they have zero allies otherwise. When Lana tried to phone for help, Thredson appeared boogeymanishly and revealed that he’s destroyed all the evidence that would incriminate him. But before he could drag Lana away for live skinning, take two, Kit saved the day. Now our two wrongfully imprisoned hotties have the best piece of evidence possible: Thredson himself, bound and gagged in a remote closet. Niiiiiiice. Kick his ass, Lana!

--Frank the guard was murdered by Evil Eunice, and it was actually pretty sad. He started as your typical unpleasant minion, but turned out to be a decent fellow with plenty of compassion for those who deserved it. His death was easy to predict, but he’ll be missed.

--Monsignor Howard is a huge tool. A huuuuuuuuge tool. Which we already knew. But still.

--This was all fine and dandy, but since Christmas only comes once a year and Ian McShane is only affordable for one episode, can we get back on track next week, show? We can? Good; I’m gonna hold you to that. Don’t make me deck your halls.

--PS: Thanks to various interviews and the power of Twitter, it’s now 100% confirmed that Dylan McDermott is Bloody Face 2012. Ah, well, I can’t be right about everything. Now we get to speculate on who the character really is (biggest theory: he’s Lana and Thredson’s rape-baby). Also, is he gonna get naked a lot like last season? I’m down.
Posted by Dang-Blasted at 11:14 AM