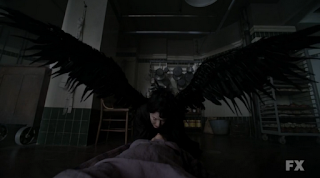 --I think a few people might worry that the show jumped the shark with this episode. Don’t worry, guys; if there’s one show that’s immune to shark-jumping, it’s American Horror Story, because their storytelling strategy is to seduce and have sex with the shark on a bed of flaming bacon. The Angel of Death? Well, why not? There are plenty of forces beyond our understanding at work here, from aliens to the (apparent) Devil himself. Are they all just different manifestations of the same intangible cosmic Whatever? Maybe. But I thought it fitting that we should get a glimpse of the mysteries beyond, as well as a kinder, more tender interpretation. Anyway, I’m too busy mourning the death of one of my favorite characters to worry about shark-jumping. Sniff.

--Death is a gentle-faced woman all in black. Death has red lipstick, a cool hat, leather gloves, and fearsome black wings that pop open as she does her work. Death is played by Frances Conroy, who was the ghostly housemaid in Season One. And Death just...is. She was summoned to Briarcliff to take a sad, demented prisoner named Miles, but she’s always out there, everywhere. Evil Eunice was frightened by her appearance, even though Death didn’t seem all that interested in dueling with her fallen cousin. Interesting to note that even the Devil fears some things. There’s a hierarchy at work here. If you take the Biblical version at face value, then the thing currently occupying Eunice’s body is a fallen angel itself. If you take Neil Gaiman’s Sandman at face value (which I totally prefer), Death is the anthropomorphic manifestation of something that’s been around for as long as the Universe itself, and will be the last thing to exit when it all comes to an end. Am I getting too big-picture here? Probably. But I like these themes, and Conroy was elegant in her role, implying much while remaining a true enigma.

--Death was there for Sister Jude, who’s not ready to die just yet; nope, she’s got more painful soul-searching to do, and one huge wrong to right. She knows it’s Evil Eunice who’s the real monster. Evil Eunice knows she knows. But the law ain’t exactly on Jude’s side, and she had to flee Goodwin’s death scene. A chat with Death in a diner revealed that Jude’s been brushing against those dark wings for a long time, ever since her husband gave her syphilis, left her barren, blamed her for it all, and tossed her aside (welcome back, heavy-handed misogyny!). Jude decided she had to finally confess to her hit-and-run of that little girl, Missy, so she went to Missy’s parents...only to discover that Missy survived the crash and is now a nurse. Awkward turtle! Yeah, but did you see the look on Missy’s dad’s face? He figured out that Jude was the driver of the car that almost killed his daughter, but he stayed silent. Forgiveness? Let’s hope so, because SISTER Motherfucking Jude needs to slap that habit back on and go exorcise the FUCK out of a certain possessed bitch.

--Death was there for Lana, and though it was surely tempting, she said no. For now. Tormented and raped by Thredson (lending more strength to the popular theory that Lana will be the mother of 2012 Bloody Face), Lana actually managed to beat up the bastard and escape when he lost patience with her. Wow, that was sooner than I thought! Sadly, Lana jumped into a car driven by William Mapother, aka, Ethan from Lost (AAAAAAAAAAHHHHHHHHHH!!!!), here playing a fucked-up asshole who was about thirty seconds away from blowing his own brains out, and did, after ranting about how evil women are (we sure didn’t miss you, heavy-handed misogyny!). And where did Lana wake up? Fucking BRIARCLIFF. For fuck’s sake. If there’s an Angel of Shitty Luck, she must be following Lana everywhere with a giant spiked hammer. Anyway, now Evil Eunice knows for sure that Thredson is Bloody Face, and it’s unclear what she’s gonna do with this info. Ah, well, her Evil Master Plan is nothing if not flexible.

--Finally, Death was there for Grace. NOOOOOOOO, not Grace! I’m in mourning. But it kinda makes sense. Grace is the type of Dickensian character to die tragically. After her horrible vaginal ordeal at the three-pronged hands of the aliens (they must be heavy-handed misogynists too!), she was nursed back to health by Dr. Arden, who apparently gets really pissy when people accuse him of inhuman surgery that he didn’t do. Kit, meanwhile, went on the lam (you’d think they’d guard the supposed Bloody Face a little better), broke back into Briarcliff (guess the forest monsters had the day off), and tried to save Grace. If you haven’t guessed by all the parentheses, I found all this a wee bit contrived. Likewise, the sudden appearance of Spivey in psychotic monster form was...sudden. But what it all led up to was Grace taking a bullet for Kit, then smiling in relief as that gentle-faced, black-winged lady with the red lipstick appeared a final time to spirit her spirit away forever. RIP, Grace. It wouldn’t have worked out between you and Kit anyway -- after all, Kit’s wife is still alive on a UFO somewhere, and if Kit and Alma don’t get some kind of happy ending, I will be angry.

--Interesting ep, all in all. I doubt we’ll see the Angel of Death again, unless she reappears at the very end to kiss Sister Jude, who’s probably ready to pass on by now. But first, like I said, she has work to do. And (teaser alert) it’s almost Christmas. Silent Night, Holy Night, NUNFIGHT!
Posted by Dang-Blasted at 8:21 AM