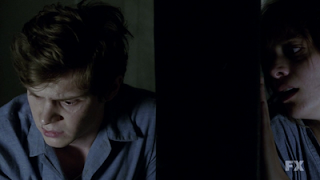 --We make our own demons, my friends. We create our own horror stories and then live in them. Sometimes we mean well. Sometimes we see someone who seems unnatural to us and want to help them in the only way we know. Sometimes we honestly think the human race will sicken and die if certain types of person are allowed to exist. Sometimes we’re pious, sometimes we’re guilty, sometimes we have no choice but to go down a terrible path. This week on American Horror Story, there were no aliens, no Bloody Face, no forest-dwelling monsters. Even Evil Eunice had most of the episode off. Nope, this week, it was all about human evil. And was it ever compelling!

--So, as teased last week, Anne Frank has arrived at Briarcliff. Or someone who claims she’s Anne Frank and is damned convincing. Played by the fiery Franka Potente, “Anne” sports a death camp tattoo and a martyr complex; according to her, it’s better to remain anonymous and let herself be remembered as the young girl who died because of Nazi evil. Which begs the question of why Anne got herself tossed into Briarcliff in the first place. Is she crazy? Does she believe her own story? She certainly seemed horrified and furious at the sight of Dr. Arden, who (according to Schindler’s List-style black and white flashbacks) was once an SS officer at Auschwitz, prone to experimenting on inmates. That sure does line up with everything we know about Arden. He’s guilty of something, that much is plain, and -- twist time! -- Monsignor Howard knows about it, and is covering for him. I knew Howard’s boring facade couldn’t last!

--Oh, Grace. Poor, poor fallen-from-grace Grace. She’s always been a mystery, but, as Kitt can attest, it’s hard to look into those doe eyes, hard to listen to that cute French accent, and imagine her to be a killer. But she is. She is because she had to be. At first, she lied, claimed she was framed for the brutal axe murder of her father and stepmother. All part of some evil scheme to steal the family farm. All someone else’s fault. But no -- Grace was the one swinging the axe. Because her father molested her and her stepmother looked the other way. She didn’t think she had any other choice. And Kit, after doing the nasty with her in the bakery (some old lady’s gonna get a loaf of bread with a comely ass-print on it) and sitting through Thredson’s compassionate-passive-aggressive act, began to think that maybe he’s guilty too. Maybe, as I theorized back at the beginning, his mind can’t accept what he has done, so it has concocted a convenient smoke screen of aliens and anal probes. Maybe Kit’s a monster too. Maybe. So many maybes.

--And, wonder of wonders, Sister Jude was almost one of the good guys this week! Of course, her eyes squinched in interest when “Anne Frank” ID’d Arden as a war criminal. Sister Jude was ever so quick to believe every nasty, vicious, damning thing about Arden -- but that in turn led to her questioning her own faith. Confronting the Monsignor didn’t help. Nor did a visit with her mother superior. Nope, it was Kit whom Sister Jude needed. Scared and confused, he came to her to confess to the murders he’s more and more sure he committed. For the first time, Sister Jude saw Kit as a kindred soul, torn apart by guilt. She actually found compassion for him. (Hopefully enough to reverse her earlier decision to have Kit and Grace sterilized. ’Cause that would suck.) The two bonded, sort of, and it’s all the more painful because we know Kit’s innocent. Isn’t...isn’t he?

--But I’d say the most fucked-up stuff happened to Lana this week. Didn’t see that coming. Desperate to escape, she took Thredson up on his offer to try and “cure” her of lesbianism so she could be let go. This led to a scene that made me, as a fellow gay, squirmy as all hell: her aversion therapy. She had to look at sexy pictures of women, including her lover, while Thredson injected her with a drug to make her ill. Then, in that maddeningly placid tone, he had her masturbate while groping a blank-faced male model. Her misery and disgust made me want to grab her puke-bucket and contribute some of my own bile, and hopefully, any decent person watching that scene feels the same way. It’s real-world horror at its finest, especially since we know this was how people really thought back then. They thought this shit was good for you -- or, at least, better than the crime of loving within your own gender. Hopefully we don’t forget the bullshit of the past. Oh, well, at least Thredson is determined to get Lana out of Briarcliff one way or the other. Oh, wait, that’s a terrible thing, because I’m more certain than ever that Thredson is Bloody Face and he’s reeling Lana in for the kill. Oh, what, he just happened to swipe a cheesecake photo of Wendy, just in case he’d need it later? Fuckin’ creep.

--Everything just seemed so wrong this week. In a good way, I guess. I’m glad the show took a break from its usual shenanigans to deliver a more sober look at the things that really scare us, thing number one being our own damn selves. But, of course, this is still American Horror Story, and the “part one” in the ep’s title promised a good cliffhanger. Sure enough, we ended with a vengeful Anne Frank(???) holding Dr. Arden at gunpoint and opening one of his doors to find Shelly, legless and halfway through monsterification, begging for death. What happens next? Something awful, I’m sure. More awful than what these characters have already done, or been forced to do? I doubt it. Some evils are peerless.
Posted by Dang-Blasted at 9:36 AM