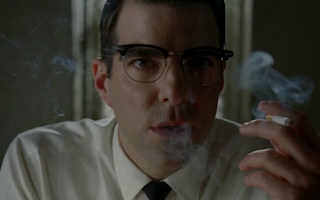 --Yeah. Just gonna gloat for a few minutes here. Because, in fact, I called it. Called it ages ago. Bloody Face is exactly who I said he’d be. I am so fucking brilliant that I just want to buy myself an ice cream cone with chocolate sprinkles. And if anyone wants to congratulate me on my brilliance, I will happily accept your accolades. Happily. Anyone?

--Okay, okay, I’m blowing this out of proportion. I’m sure plenty of other people guessed Bloody Face’s identity. It’s like last season when Taissa Farmiga didn’t realize she was dead for several episodes. Some things are just sooooo foreshadowed in every way. C’mon, it’s always the nicest-seeming dude who has the most to hide! And they’re always filming Thredson from demonic angles! And he totally does the Sylar voice half the time! So maybe it wasn’t really out of the blue, but because this show is what it is, there were still a few additional twists I didn’t see coming. Will I unpack them? I sure will.

--This week continued to focus on human evil, with an emphasis on the rotten things men do to women. This was best (worst?) displayed in the conclusion of the sad tale of “Anne Frank.” Only she’s not Anne Frank, is she? Nope, her husband arrived at Briarcliff and spilled the beans: Anne’s real name is Charlotte and she’s got massive post-partum. Trapped in the stifling, colorless existence of a housewife and mother (depicted in queasily-tinted home video footage; I love how this show does flashbacks), Charlotte found a bit too much solace in the tale of the little girl murdered by Nazis. Perhaps, to her, it became the perfect metaphor for the squashing of femininity by the all-mighty phallus of authority. When Anne/Charlotte went home to her well-meaning but smug husband and generic baby, her dementia only grew worse...and Dr. Arden was all too happy to tap an orbitoclast into her eyeball and turn her into the perfect Stepford Wife every man craves! So Anne’s gone...not dead, but gone. And her secrets die with her. Notice that it was never definitively proven that she wasn’t really Anne Frank. And a photo on her wall revealed young Dr. Arden -- sorry, Dr. Gruper -- standing right behind Hitler at a rally. Thus dies freedom; thus does the terrible cycle continue.

--During her tragic monologue, Sister Jude had a line about how God always answers our prayers, but never in the way we expect. That line hung over the episode, I think. People got what they wanted, but always with that ghastly twist. Sister Jude herself completed her downward spiral, as she went and hired a Nazi-hunter to expose Arden, only to discover that her entire claim fell apart without Anne Frank. Arden, the ultimate smug male authority figure, shut Sister Jude down with a little help from Evil Eunice, and by the episode’s end, Judy had tossed aside her wimple and re-embraced booze, tobacco, and having depressing sex with random strangers she meets in bars. Yes, dammit, I do feel bad for her. In a twisted way, I do want her back at Briarcliff, terrorizing inmates and being a huge bitch. Why does this show jerk me around so much?

--Shelly’s subplot continues to crawl forward (lol, see what I did there?). Arden tasked Evil Eunice with disposing of the hapless amputee, but because it’s Evil Eunice, she decided to dump Shelly next to an elementary school so she could make some Dicks and Janes shit their pants. I do wonder what Evil Eunice’s ultimate scheme is. Is she blowing the lid on Arden? Maybe she’s trying to get rid of all her superiors -- Sister Jude, Arden, the Monsignor -- and reign supreme over Briarcliff. And then what a naughty, naughty girl she shall be! Is it wrong that I kinda want to see that?

--This week’s twist-I-in-no-way-saw-coming: Grace takes a trip to Alienville! Holy shit! The poor girl was alone and waiting to be sterilized, but before that could happen, they came for her. Nope, not the orderlies, the ALIENS. HEEEEERE THEY COME TO SAVE THE DAAAYYY! Or something. Grace got a repeat of Kit’s unpleasant prodding and probing in a bare, white-lit nether-space, but at least there was this lovely pregnant lady standing over her the whole time, saying, “Don’t be afraid. My name is Alma.” HOLY SHIT! Next day, Grace was dazed and bloody (bloody from the aliens, or the sterilization?), but she did manage to scream out this rather important bit of news to Kit as Kit was being dragged away to fry for the Bloody Face murders. Well, this should definitely start an interesting new chapter in both Grace’s and Kit’s stories -- but Kit has to avoid execution first. Why would the good Dr. Thredson betray him?

--OH, RIGHT. Because this whole time, Thredson was setting Kit up to be the fall guy. Poor, poor Lana walked right out of Briarcliff with Thredson, and right into mortal peril. Honestly, any sane person would take one look at Thredson’s sinister bachelor pad and guess the truth, even before they saw that the lampshades had nipples. That scene built and built and built and built in the best slasher movie fashion, and there was that sublimely awful moment when both of them looked at each other and silently acknowledged what was finally out in the open. Thredson dropped Lana through a trapdoor and she awoke in the Saw franchise: chained down in a tiled abattoir next to the frosty corpse of her lover with Thredson looming over her in full-on Bloody Face getup. Yep. Called it. Although...I predicted Thredson would be unmasked but I also kinda thought he’d be fucking caught. Now things ain’t looking good for Lana, but if Thredson’s a good little serial killer, he’ll toy with his prey before skinning it, and that should give our dogged reporter time to escape. Whether she escapes with all her body parts intact...that’s another story.

-Oh, my, this show has gotten juicy. I love never quite knowing what happens next. The first act of Asylum has drawn to a close. Act II is gonna be all the way to fucking Mars. Maybe literally.
Posted by Dang-Blasted at 9:43 AM