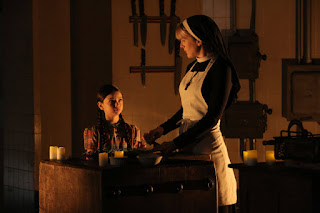 2.6: The Origins of Monstrosity

--It’s interesting...I really enjoyed this ep, yet I feel like it didn’t quite achieve its goals. As the title suggests, it was all about the backstories of its various bad guys, but while we learned a lot of info, the waters got muddied when it came to the actual why. Why are some people evil? What little brainworm causes dark deeds, and why can some seeming innocents (like Sister Eunice or Monsignor Howard) be so easily corrupted? Yeah, we got factual reasons (Eunice being sexually ridiculed in her former life; Howard’s misplaced nobility), but I’m not sure AHS is quite profound enough to go deeper. Evil happens, is the basic message here. Evil is a formless je ne sais quoi that you can never quite escape, and some people make the perfect vessels. I’d like a little more unpacking of the concept, but I may not find it here. That said, fun ep!

--I’m impressed by the present-day subplot. Each ep devotes mere minutes to it (or leaves it out entirely), yet it’s turning into a truly engaging mini-movie with twists and turns galore. It’d be kinda interesting to edit together all the present-day scenes by themselves and see how they held up. Anyway, a sinister voice on the phone summons the cops to Briarcliff, where they find the Bloody Face posers hanging lifeless from that cool central stairway. So much for them. They also found Leo’s body (looks like the dude’s finally, FINALLY dead), but Teresa’s was missing. Because she ain’t dead; she’s strapped down in yet another torture room, at the mercy of Bloody Face, 2012 Edition. Yeeeeeehaw! Okay, so we only got a glimpse of 2012 BF, but...did “his” arms look rather feminine, or was it just me? The voice on the phone could’ve been electronically altered (there’s a report that it’s Dylan McDermott, who is confirmed to return this season, but I’m not sure I buy that). I still love my pet theory that 2012 BF is Sister Eunice, but now we have a new suspect. Who?

--Why, the subject of this week’s One-Shot Subplot, that most beloved of horror archetypes, the Creepy Little Girl! Meet Evil Jenny (Nikki Hahn), a solemn-faced moppet who kills her pals with scissors, and who is obviously inspired by Rhoda Penmark, and also possibly by Wednesday Addams. Evil Jenny’s creeped-out mother tried to abandon her at Briarcliff, the worst possible place to stick a prepubescent sociopath, and sure enough, Evil Jenny’s little nose led her to Evil Eunice, who sent the girl further down the path of evilhood with a truly awesome-to-watch relish. By the episode’s end, Evil Jenny had slaughtered her entire family, and is now a candidate for modern-day Bloody Face. All this was great, but still didn’t quite shed enough light on the origin of evil. So, some people are inherently rotten, is that it? But Evil Jenny’s the only inherently evil character we’ve seen; even Arden thinks he’s doing good. It’s alarming to think people like her exist in real life (and they do), but are we just supposed to shrug and chalk it up as one of those Great Mysteries? Oh, well.

--Back to Arden thinking he’s doing good...his sort-of origin story was pretty sweet. The sad, drawn-out tale of Shelly the Nymphomaniac has finally come to a close. Who was there to give her last rites and euthanize her? Monsignor Howard and his weird accent, of course! And now we know the truth: Arden/Gruper worked in Briarcliff back when it was a tuberculosis ward, and Howard kept him on upon learning of his “noble” experiments. Using a lovely cocktail of syphilis and TB, Arden’s attempting to create superpeople who can weather not only disease, but nuclear war. Great! Too bad they eat human flesh and look like someone deep-fat fried them. Howard’s understandably pissed to see what Arden’s doing to his victims, but Arden cheerfully promises to drag Howard down with him if he’s exposed. Jesus Horrorshow Christ, Howard, grow a fucking spine. God’s on your side, remember?

--Awww, poor Sister Jude came this close to spilling the beans on Arden, but was foiled by Evil Eunice, who just can’t wait for Jude to be gone so she can do far more than prance around in stolen red undies. Arden arm-twisted Howard into giving Sister Jude the sack. Sister Jude managed to lift fingerprints off Arden. But then Evil Eunice found out about the hired Nazi-hunter, Goodwin, and murdered the shit out of him. Oh, but even the Devil can’t see everything coming: Goodwin stayed alive long enough to reveal to Jude that his killer was a nun. Ooohh, does Sister Jude get to play detective now? I sure hope so! I’ve gone from hating that bitch’s guts to really wanting her to kick some ass. But since I’m also perversely rooting for Evil Eunice, things are getting conflicted.

--One more sort-of origin story: Thredson/Bloody Face. He’s basically reverted to a combination of Norman Bates and Eli Roth’s character from Inglourious Basterds. It’s Mommy Issues, yay! Specifically, the fact that Thredson never had a mommy and is now projecting some sort of psychosexual motherhood onto dead women of a particular age. Only he can’t get his mental rocks off unless he skins them alive. Ooookay, we’ll go with that. He really wants Lana to be the Mama Bates to his Norman, and Lana’s smart enough to play along and humor him. She even talked him out of killing her at the last second, which struck me as slightly contrived. Zach Quinto’s doing a good job of selling the new Thredson (and making him distinctly different from his first serial killer role, Sylar from Heroes), but Thredson’s blended gazpacho of psychosis is a bit too cinematic and derivative for my taste. I still love the scenes between those two; such chemistry! Even if this episode didn’t really dive into the origins of monstrosity, it still gave plenty of bang for my buck. Is it okay to say this season keeps getting better?

--I miss Grace and the aliens. Bring them back! Also, “Grace and the Aliens” would be a good name for a pretentious indie band.
Posted by Dang-Blasted at 9:46 AM