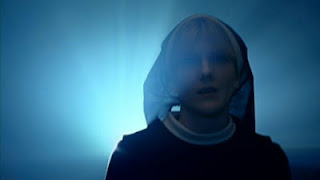 --Holy balls on toast. I think this is my favorite ep yet, just for its barrage of unpredictable plot turns. You want twists? asks the show. We’ll give you neck-snappers! Sister Jude meets an alien! Shelly loses weight...the bad way! Leo and Teresa fall prey to the Cult of Bloody Face! Dr. Arden does terrible things to a statue! And here’s some dark comedy while we’re at it, courtesy of Shitfaced Sister Jude! Watching this ep was rather like being in the powerful lighting storm that wreaked havoc on Briarcliff; no wonder it’s the episode title. Me, I would have titled it, “Episode 2.3: BBBRRRRLLLALAAAHRRRHHGGWHUT?”

--So the modern-day lovebirds appear to have finally met their maker, thanks to...wait, WHAT? Yeah, throwing a lot of my theories right out the window, it turns out that lurking in the ruins of Briarcliff were at least three dudes in Bloody Face masks, one of whom gunned down Leo and Teresa as they tried to flee. Halloween prank gone too far, or legitimate cult? And how can the first Bloody Face (I’ll assume he/she is the ringleader) still be up and walking after Teresa stabbed him/her to shit? I kinda have a theory that it was a trick weapon, a collapsing ice pick. After all, Leo sure seemed feisty after being stabbed multiple times with it. Inevitable alternate theory: Ringleader Bloody Face is a supernatural entity and his/her masked minions may not realize. (My current prediction is that it’s an older Sister Eunice, maybe still possessed.) At any rate, this seems to mark the end for Leo and Teresa, but totally not the end of the modern-day shenanigans. I didn’t see this coming at all, and it’s great.

--My current favorite character is, of course, Evil Eunice. Love her. Yeah, no more ambiguity: she’s about as possessed as possessed can be, and it’s turned her into a creepy/hilarious sociopath who retains some of her innocent little flower schtick while fucking with everyone’s heads, hearts, and libidos. She seems bent on setting Sister Jude against Dr. Arden and vice versa, and since the two of them are already quick to pounce on each other, it’s a pathetically easy task. She also appears to be tormenting Sister Jude with her past hit-and-run, although part of that could be Jude’s own guilt, magnified by supernatural energy. Her anguish led to the comedy I mentioned earlier, as she got utterly hammered on communion wine and went all tripolar, segueing between drunken bitchiness, weepy guilt, and My Little Pony: Friendship Is Magic while the inmates and orderlies looked on in bewilderment. And, what’s this? Alone in the halls, she ran headlong into something that looks a daaaaamn lot like one of Kit’s alien captors. Why is there a spidery extraterrestrial chillin’ in Briarcliff? Maybe he came for the bread.

--I am more and more certain that Dr. Thredson is Bloody Face. I formulated this theory last week and it has strengthened. Part of it is Zach Quinto’s performance. Let’s face it, the guy does creepy ambiguity very well, and Thredson’s kindly doctor facade has cracks. Other clues: That angry message from his mother, delivered via the possessed kid in the last ep. The fact that he casually strolled into Wendy’s home, supposedly to check up on her at Lana’s request. His own repression (I mean, look at the guy). My theory is that he’s going to be revealed as the killer and, ironically, thrown into Briarcliff as an insane patient. Hee hee hee. I guess I don’t mind Quinto being typecast after all.

--I’m still not a fan of Shelly, but I did feel sorry for her this time around. We learned that some of her over-the-top delivery is intended to hide her true feelings. When our team of good guys made another breakout attempt, Shelly came too, but nobly distracted an orderly with her Magic Slut Powers so the others could keep on. Sadly, this led her into the clutches of Arden, who’s being really jerked around by his hormones at the moment, and who decided to force himself on the nympho. It was a shocking scene, as Shelly, deprived of control over her own sexuality, dissolved into terror and tears. Then it turned funny, as she learned that Arden’s manparts leave something to be desired. Then it got shocking again, as he knocked her out and took her to his private surgery. Yes, even in its last seconds, the ep was surprising us; I totally thought he was gonna kill Shelly, but instead, he CUT HER FUCKING LEGS OFF. Oh, dear, this is just the beginning of her woes, isn’t it?

--Finally, we have seen the creatures in the forest and they look like zombies, or maybe just upset people with a really bad case of acne. They were enough to force Kit, Grace, and Lana back into the asylum, once again thwarting their escape attempt. At least they didn’t get caught, although Pepper the microcephalic girl seems to be missing. Maybe she’s Bloody Face! That’d be tasteless enough to fit. Nah, still going with Thredson.

--Loved the ep. Can’t wait till next time, when Anne Frank shows up and Dr. Arden is exposed as a Nazi war criminal. Hah, spoiler alert. What a delightful show this is.