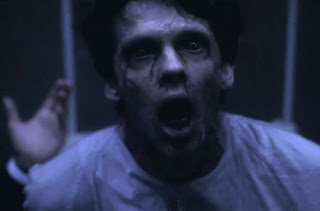 --Exorcisms. I’ve never been a huge fan. As a sub-genre of horror, it hasn’t interested me all that much, in part because the tropes are predictable. Some poor young possessee writhes and salivates on a bed while a priest bellows in Latin and stuff flies about the room. At some point there will be A) speaking in tongues, B) levitation and/or unholy strength, C) a crucifix getting symbolically destroyed, and D) the “demon” reading people’s minds and calling them out on past dirty deeds. This episode of AHS had all those things, but you know? It worked pretty damn well. They knew that every single possession story is just riffing on The Exorcist, so they ran with that and focused on the freaky details. I’m down!

--Enter Dr. Oliver Thredson (Zachary Quinto, yay!), who has effectively made the power tug-of war in Briarcliff into a three-way struggle. If Sister Jude represents old-school faith and Dr. Arden stands in for quack science, Thredson is the avatar of modernity. Liberal, forward-thinking, appalled by Briarcliff’s stone-age approach to mental illness, Thredson stepped outside his bounds (he was ostensibly just there to judge if Kit was insane or not) and muscled his way into Sister Jude’s business, thereby helping to set up this ep’s One-Shot Subplot. A terrified couple brought in their teenage son, who was exhibiting such angsty behavior as frothing, speaking in a demon voice, and eating fresh cow hearts right from the source. Ironically, Thredson and Monsignor Howard had to work together in order to exorcise and/or cure the dude. In the process, the token rent-a-priest was defeated and the demon(?) forced Sister Jude to face her past: she used to be a hard-partying, cock-chasing lady of the night, until she killed a little girl with her car and fled the scene. Repressed guilt, yay!

--Here’s the kicker, though: the demonic possession seemed very real. Stuff happened that defied all rational explanation. So I’m very interested in what Dr. Thredson thought of the whole affair. Can he pull excuses out of his ass, or has he already come to see that this world is host to forces beyond our understanding? Also, considering that he’s not an actual Briarcliff employee, how are they gonna have him as a main character? I can’t wait to find out. Quinto’s always fun to watch, but I especially love that they’ve brought in a rational “nice guy.” You just know he’s gonna get fucking ruined over the course of the season. I like him!

--Know who I don’t like? Shelly the freaking Nymphomaniac. I have nothing against Chloë Sevigny, but honestly, what the fuck does she think she’s doing? Her acting is so over-the-top that I absolutely cannot take her seriously, and her backstory monologue to Dr. Arden felt very forced. That was my least-favorite scene; James Cromwell seemed really awkward, having to be all cruel to Sevigny while she spat exposition at him. Nope, don’t buy Shelly. But Arden’s getting more twisted by the minute. Hiring a call girl, threatening her, making her dress up like a nun...dude’s libido is seriously to the moon and back. And the call girl found some photos that implied Arden’s into bondage, S&M and....murder? Were those mangled bodies? I think we’re supposed to believe that Arden is Bloody Face. Maybe. Or maybe he’s a gigantic red herring.

--What about the good guys? Well, Lana’s a bitch, that’s for sure. She formulated an escape plan and enlisted Grace as an accomplice, but absolutely refused to bring Kit along, believing him to be guilty. (This subplot required Grace to be sensually nude for an entire scene; seriously, is anyone not gonna get naked at some point?) When the power went out as a result of the demon possession, the ladies made a break for it -- but when Kit insisted on accompanying them, Lana sounded the alarm, blowing her chance at freedom. Obviously, her Ruthless Reporter persona is still intact, but it may be cracking, because her “reward” was to watch Kit and Grace be caned bloody by Sister Jude. On top of that, Kit nobly took Grace’s punishment for her. So where are your damn principles now, Lana? God, I’m so looking forward to Grace’s backstory. It’s gotta be more interesting than fucking Shelly’s.

--I told you Sister Eunice was gonna be intriguing. As the demon(?) departed the dying body of the poor teen, she fainted. And when Arden visited her in the sick ward, supposedly to just be all fatherly and shit, she acted a wee bit...odd. Is it just more sexual repression hijinks, or has that demon found a new home? Maybe I’m jumping to conclusions, but let’s watch Eunice verrrry carefully from now on.

--Finally, the big question: who is Bloody Face? I was all set to predict the first character to die on the show, but the show’s two steps ahead of me. In a brief prologue, present-day Bloody Face stabbed the fuck out of Leo while Teresa watched helplessly. (Is it just me, or did she hide in the same room from which something tore Leo’s arm off?) And moments later, 1964 Bloody Face turned up in the home of Wendy, Lana’s partner, and appeared to slay her too. Are Leo and Wendy truly murdered? And, assuming one of the characters is Bloody Face, can we now rule out all of the Briarcliff inmates, since they’re locked up and couldn’t be at Wendy’s home? The show’s jerking us around a lot, and I kind of like it. Not gonna rule out two Bloody Faces, an “original” and someone else who takes up the mantle later. Ahhh, mysteries upon mysteries. Till next week!
Posted by Dang-Blasted at 12:50 PM