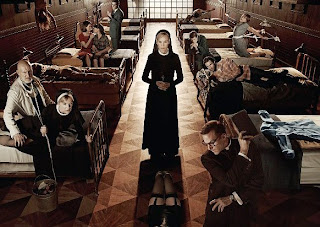 --Heart pounding. Eyes jittery. Brain a bit fried. Yeah, this seems about right for my mental state after watching American Horror Story. Also jazzed that I have a new show to bore you with by recapping, episode by episode. MWA HA HA HAAA! Read if you DAAAAARE!

--Okay, that was cheesy. SO, right off the bat, I can say that the second season of FX’s hit show, subtitled Asylum, is a very different creature from Season One. That story, about a family’s internal and external struggles within a very haunted house, took its time and built on its dread and characters. Asylum, however, hits you in the teeth and then grabs you by the armpit hair and yanks you through an old-fashioned printing press. Loud noises! Quick, jagged editing! Characters barking rapid dialogue at one another! I can’t decide if I like it more or less than the quieter approach of Season One. It definitely glues you to the screen, but I think I’d prefer character building over hyperactivity. Oh, well, this ep had to cover a lot of ground; future eps may be slower-paced.

--We’re moving from the present to the past (mostly) and from bad things happening in old Victorians to bad things happening in an institutional setting. Briarcliff Manor is a tuberculosis-ward-turned-sanitarium that we first saw as a torn-up wreck in modern times. A quick audience briefing was delivered by a pair of lovebirds, Leo and Teresa (Adam Levine and Jenna Something-Hyphenated), with some sort of bizarre haunted building fetish. They showed up for a self-guided tour and some kinky sex, but got more than they bargained for when Leo’s arm was ripped off by...something...and Teresa, fleeing for help, encountered a dude who either has no face, or has made a new one out of someone else’s face, whichever’s nastier. I kind of like this as a framing device; it has the feel of a modern slasher film and says something about the mental shift regarding what we, as Americans, find scary. Which leads us to...

--The main storyline, set in 1964 during Briarcliff’s heyday as a loony bin. See, back then, people were scared of things like social change, sexual deviance, people who dared to be different, and the idea that Science might be about to permanently snuff out Faith. Thus, a mighty power struggle between Sister Jude (Jessica Lange), head nun of the asylum, and Dr. Arden (James Cromwell), head quack. Seeing these two screen titans getting to exercise their snarling muscles at one another was possibly the most satisfying thing about the ep. God, Lange is so fucking good! Remember her grande dame from Season One? She now disappears inside a very different character, a fast-talking ball of religious fury and sexual repression with a “Maaaary Muthuh of Gawd” accent who’s doubtlessly going to dominate the season. But she has plenty of competition from Cromwell, whose sinister doctor appears to be chopping up inmates and remaking them into...something. Caught in the middle of the feud are the smarmy Monsignor Howard (Joseph Fiennes), whom Sister Jude totally wants to bone, and Sister Eunice (Lily Rabe), a submissive shrinking violet with a masochistic streak.

--Noticing all the sex? You should be. I’d suggest making a drinking game wherein we tip one back every time the show focuses on themes of psychosexuality, but we’d be dead after three episodes. Back to Sister Eunice...I find her “little lost lamb” schtick oddly intriguing, and she also got the best line in the episode (“She’s not harmless. She drowned her sister’s baby and sliced his ears off”), so I’m gonna watch her closely. It’s often the seeming innocents who have the most to hide.

--SPEAKING OF WHICH, our sort-of hero figure is Kit Walker (Evan Peters, last seen as the creepy undead teen in Season One), a nice guy who makes the mistake of being in love with a black woman in 1964, and the even bigger mistake of telling the truth when he is apparently abducted by aliens. Yes, aliens. As if there wasn’t enough weird shit in this show. Kit is convicted of his wife’s murder, not to mention the murder of other women, and is dubbed “Bloody Face” by the media. Tossed into Briarcliff to await his fate, the poor guy gets caned by Sister Jude, terrorized by other patients, and put under Dr. Arden’s knife, all in 45 minutes. Sucks to be him! But are the aliens real? We see flashes of Kit’s otherworldly encounter and Dr. Arden finds a spider-legged microchip thingy under his skin, but I’m dubious. More on that later. At least Kit’s made friends with Grace (Lizzie Brocheré), another maybe-not-insane inmate accused of killing her loved ones. Verrrrrrry intrigued by her as well!

--The other lost soul thrown into the nightmare of Briarcliff is Lana Winters (Sarah Paulson), a reporter who makes the mistake of being a lesbian in 1964, and the even bigger mistake of poking into Briarcliff’s seedy underbelly. After witnessing Sister Eunice tossing raw meat to something in the woods, Lana plays Nancy Drew and soon finds herself strapped to a cot. And she’s not going anywhere soon, because Sister Jude blackmailed Lana’s lover (Clea DuVall, typecast as usual) into having her committed. Now she’s due to be “cured” of her lesbianism the Catholic way. Ahhh, moral corruption in the name of a so-called higher power! Good thing that doesn’t happen any more, right?

--So, anyway, this episode rocked and I loved it, even if it was a bit headache-inducing. Plenty of subplots and questions have been introduced. I’m assuming that the scary chap Teresa met in the present-day asylum was the real Bloody Face, but which of the characters, if any, is under the mask? What’s lurking in the forest, and does it have anything to do with Arden’s experiments? Is Grace really innocent? Is there any point to Chloë Sevigny’s goofy nympho? And, most intriguing, is Kit crazy or not? Insanity is clearly a big theme here, so I wonder if we can trust our own eyes. I have a theory that the alien abduction thing is Kit’s mental coping mechanism for something worse -- like, say, his black wife getting killed by racist creeps. The alien doohickey Arden found in Kit’s neck seems to challenge this theory, but I’m not giving up on it. Can’t wait for the next episode, when we will meet Zachary Quinto’s nice-guy doctor and learn if Adam Levine’s guest spot is already over!

--I’m buckled in for the ride, alright. I’ll be laughing and screaming through the season with great enthusiasm. Mostly laughing. But still.
Posted by Dang-Blasted at 9:09 PM