Loads of films are obscure for a very good reason. Browse through Netflix and you’ll find an endless supply, most of which have names like Alien Terror Train and star some poor motherfucker like James Van Der Beek. Death metal screeches on the soundtrack as James battles CGI aliens that look like they were created on a Lite Brite, and...is it any wonder my boyfriend and I just watch Top Gear over and over?

Anyway. Some films don’t deserve to be obscure. I once made a list in order to draw attention to lesser-known cinema of real quality. Time to add to the museum! Try out the following films; each one’s a modest little gem.

DANG-BLASTED’S TOP 10 AWESOME MOVIES YOU MAY NOT KNOW EXIST (pt. 2) 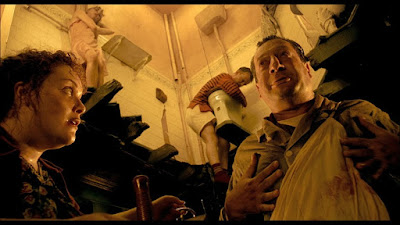 Delicatessen (1991)
The whole world fell in love with Jean-Pierre Jeunet’s Amélie in 2001, but a full decade earlier, he was fine-turning his unique brand of clockwork whimsy, and wasn’t afraid to weird people out. Delicatessen is a film in which every aspect -- characters, setting, plot -- seems to function as a piece in a twisted game of Mousetrap. Set in some vague, post-apocalyptic hinterland, the film concerns the inhabitants of a ramshackle boarding house, most of whom have resorted to murdering and eating new tenants. But they’re French, so they’re at least somewhat polite about it. Jeunet’s invaluable collaborator, Dominique Pinon, plays the latest victim-to-be, who turns the tables on les cannibales in a mix of pitch-black comedy and Terry Gilliam-style surrealism. It’s a hoot. It’s far from Jeunet’s best work (that’d be A Very Long Engagement, with Amélie as a close second), but as a debut, it could hardly be juicier. 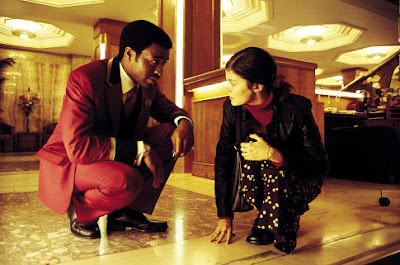 Dirty Pretty Things (2002)
Let’s do a test. I’m going to give you a list of names: Chiwetel Ejiofor, Audrey Tautou, Sophie Okonedo, Benedict Wong, Zlatko Buric, Sergi López. If you recognize at least two of these people, there’s hope for you yet. If you just went, “All those guys are in a film together? Hot damn!” then you’re one of the tribe. This global cast of awesome character actors join forces to play London immigrants who discover a sinister, gruesome conspiracy within the hotel where some of them work. (Hint: Human organs come into play.) Stick “traditional” actors in this scenario and it might be a good thriller...but when it stars refugees, vagabonds, the forgotten and ignored, it gains a fascinating resonance. I love when a film’s genre is merely an excuse to dive into a deeper issue. This grim little caper has a lot to say. Tautou leaves behind her adorable pixie schtick (see Amélie, above), and as for Ejiofor, well...long before 12 Years a Slave, some of us knew how great a career he had coming. Just saying. 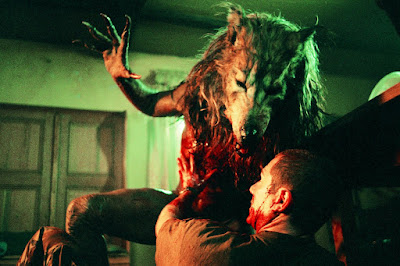 Dog Soldiers (2002)
Dog Soldiers is the sickest, dirtiest, grungiest, and meanest werewolf movie I’ve ever seen. All of which is intended as high praise. Right now we’re enjoying a high-minded horror trend with films like The Babadook and It Follows, but let us not forget that good horror doesn’t need underlying themes and symbolism. It doesn’t need to be discussed in film studies classes. Dog Soldiers is about a squad of British troops training in Scotland, who find themselves utterly besieged by vicious lycanthropes. That is all the plot we need or expect. Director Neil Marshall would later make The Descent, a truly great horror movie, and Dog Soldiers was his gore-drenched warmup routine. The werewolves -- bodybuilders with fake wolf heads -- look and feel so much realer than any CGI could accomplish; I stuck them on my Top 10 Movie Monsters list so long ago, and they haven’t gotten any less awesome. Wanna see Liam “Davos Seaworth” Cunningham turn into a hairy, fangy murder machine? Of course you do. All horror buffs should have this in their archive. 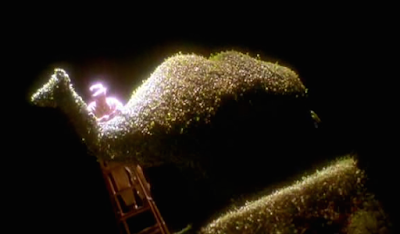 Fast, Cheap & Out of Control (1997)
The best documentaries conduct their images like an orchestra, each new movement composed of an intricate array of different elements. Director Errol Morris is a helluva conductor. He’s made plenty of films, but I’m always mesmerized by this one, which stars four men: a lion tamer, a topiary gardener, a robot scientist, and a mole-rat expert. What’s a mole-rat expert? Only he can say for sure. Morris doesn’t just intercut these eccentric dudes’ testimonials, he interweaves and overlaps them until they become a single story: the endless struggle of humankind to tame chaos. These four guys are compelled to take something that doesn’t make sense -- a shrub shaped like a giraffe, a rodent that lives like an insect -- and construct their own little microcosm, their garden or circus ring or museum exhibit, where they may impose order. That sort of insecure god-play is what drives our species, for better or for worse, and Morris’s collage of stock footage, Super 8 mm, old Clyde Beatty serials, and tipsy circus music demonstrates his own controlled chaos. Fast, Cheap & Out of Control is a universal, provocative theme disguised as a documentary. 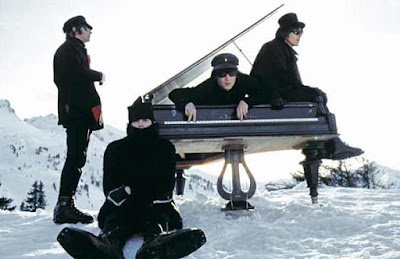 Help! (1965)
I fucking adore this movie. It is so stupid, so ridiculous, so lacking in brain cells, and I’ve loved it since childhood. Yes, it stars the Beatles at the height of their fame. Someone decided it’d be cute to stick the Fab Four in a James Bond spoof, and cobbled together a plot in which Ringo gets a sacred Hindu ring stuck on his finger, and is chased across the globe by a sacrificial cult and a mad scientist. John, Paul, and George just kinda tag along, pausing now and then for musical numbers (they do “Ticket to Ride” on skis!), and once I reached adulthood, I came to appreciate how utterly, cripplingly stoned all four Beatles were during the entire shoot. You can smell the roiling waves of Mary Jane seeping from every cranny of the film. And that makes it even more endearing. Rife with kooky humor and unfocused one-liners (“Hey, it’s a thingy! A fiendish thingy!”), not to mention timeless pop music, Help! is all I really need to appreciate the glorious stupidity of the 1960s. Pure fun. 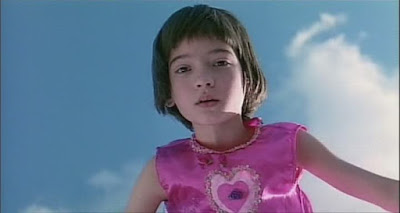 Ma Vie en Rose (1997)
Next up, two films that examine the innocence of children in a hard world -- and do so with great poise. Ma Vie en Rose translates to “My Life in Pink,” and it’s a sorta sweet, sorta cynical tale about a young French boy named Ludovic who believes he’s a girl. That’s it. Too young to be gay or trans, to wear any sort of political or social label, he simply knows, with cute tenacity, that he’s a girl trapped in a boy’s body, and that one day the universe will correct this oversight. We watch, wincing somewhat, as the adults in little Ludovic’s world react with all the offended bluster and close-minded bafflement you’d expect. If that sounds too depressing, don’t worry. The film uses the visual language of a sitcom -- cozy suburbs, 50s colors -- to paint its hero(ine)’s dilemma with comedic love. When Ludovic schemes to marry the boy next door (his father’s boss’s son...cue laugh track), we chuckle and then feel melancholy. But it’s not a hurtful film. It inspires thought. 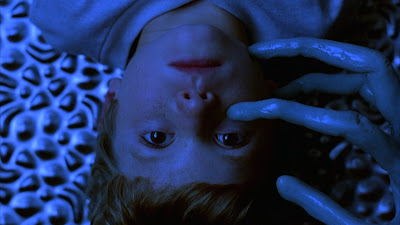 Mysterious Skin (2004)
This one is hard to watch. Very hard. But its sheer power deserves notice. Based on the equally unflinching novel by Scott Heim, it stares straight into the abyss of pedophilia -- not by draping it in horror-movie slime, but by unpacking the psychology of its victims. Thus, when two young Kansas boys are sexually preyed upon by their Little League coach, one of them thinks he likes it and grows up to be a gay hooker, while the other is so traumatized that his brain flips an emergency kill switch and he becomes convinced he was abducted by aliens. The boys turn into damaged young men, as the film moves from the dreamy expanse of the Midwest to New York City during the AIDS crisis. Yeah, Joseph Gordon-Levitt (who plays the gay one) is quite fine, but the story’s “sexy” elements are like a wound. You may not find a better argument against sexual abuse; it doesn’t rant and rave, but merely follows the abused down their quiet, broken path. We all know someone on that road.

Rivers and Tides (2001)
Now for a gentler film...one which relaxes the viewer with zen. Art is subjective, and the worst kind (in my opinion) feels it has to make some sort of wannabe-profound statement, some political or social claptrap that only makes sense in the artist’s ego. However, Scottish artist Andy Goldsworthy merely...creates. This dreamy documentary shows off the man and his work. He wanders the wilderness -- forests and beaches, placid rivers and snowy mountaintops -- and crafts amazing sculptures with the materials he finds at hand. Stones become a mystical dolmen; ice turns serpentine; trees are woven and leaves are blended like paint, all from Goldsworthy’s patient and skillful fingers. The “message” of his art is that beauty is all around us and nothing feels more beautiful than to create, even if your creation vanishes within the hour. The movie drifts along, showing us all manner of visual poetry, and as I watched it, I felt the pleasant urge to make something myself. So I wove a potholder. My fingers pulled and teased the loops of fabric, and I felt a little of the pleasure Andy Goldsworthy must feel. Try it sometime. 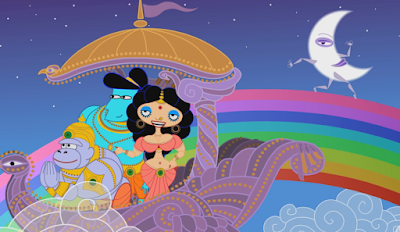 Sita Sings the Blues (2008)
For the best animated film you’ve never seen, we can thank Nina Paley, who made Sita Sings the Blues after her husband moved to India and dumped her. Heartbroken, Paley found a spiritual sister in Sita, heroine of the Hindu epic, The Ramayana, who was similarly done wrong by her man. From this ancient tale, Paley creates a kaleidoscopic visual marvel, utilizing five or six different animation styles, each of which has more character than ten thousand Minion sequels. Sita’s ordeals take the form of Bollywood musical numbers, paired with old recordings by Jazz Age crooner Annette Hanshaw, intercut with droll nitpicking from a trio of shadow puppets and snippets of Paley’s personal ordeal. It’s all a big revenge fantasy, but it’s beyond entertaining. Paley seems to have been inspired by everything from Monty Python to “End of Ze World,” and the result is that the animation itself becomes an endless source of deadpan comedy. Sita Sings the Blues laughs at genre. It’s gorgeous to look at, it’s educational, it’s feminist. It’s on YouTube. Watch it. That’s all! 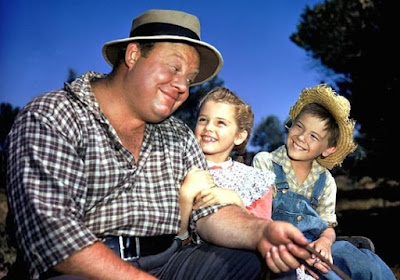 So Dear to My Heart (1949)
Let’s end on the warmest, coziest note. Disney’s Song of the South, with its archaic racial attitudes, is considered an embarrassment. However, at around the same time, they made So Dear to My Heart, a guileless buried gem. It’s about a young Indiana boy (Bobby Driscoll) who adopts a black lamb and raises it with aspirations of winning blue ribbons. G-rated tribulations and life lessons follow, as our hero receives guidance from a conspiratorial uncle (Burl Ives) and a pragmatic granny (Beulah Bondi) whose role is to say no, then immediately relent. The plot is punctuated by delightful, impressionistic animated sequences -- an example of Walt Disney’s boundless need to experiment with the medium. Is it sentimental? Pious? Simplistic? Yes to all three, and don’t you feel like we need that more and more these days? So Dear to My Heart gives me the warm fuzzies, and not just because of Burl Ives, whose singing voice could have ended wars. It represents an innocence that no longer exists (more so if you consider what happened to Driscoll), and that kind of nostalgia should never become obscure. I’ll keep fighting the good fight. Help me out and spread these films around.
Posted by Dang-Blasted at 8:54 AM