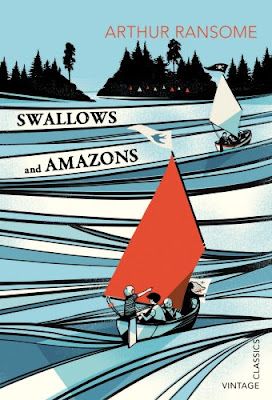 I don’t tend to wax political on this blog. It’s for movies and video games and being nerdy. However, I can be a bit topical now and then. For instance, while recapping American Horror Story: Hotel, I had the opportunity to make some bitter comments about the state of America’s youth. To whit: I believe we coddle and shelter our children far too much, leaving them A) hideously ill-prepared for the real world, and B) toxified with entitlement, with the belief that life will be a series of blue ribbons just for existing. It makes me very angry. But y’know what’s better than anger? Antidotes. Today, I’m not here to rant and rave. I’m here to examine children’s entertainment...not as it is today, but as it once was. Let’s visit a place where kids are allowed to fly free, yet still held accountable. A place where adventure means ADVENTURE and not a heavily chaperoned Easter egg hunt where Daddy finds all the eggs for you. Let’s talk about Swallows and Amazons.

I feel like a ton of people have at least heard of this book series. Swallows and Amazons was written by Arthur Ransome in the 1930s and ’40s, and read to me by my parents when I was a tyke. Lately, I’ve been revisiting the series and have just finished the fourth book. Imagine my amazement when I abruptly discovered that they just made a freakin’ Swallows and Amazons movie and it’ll be released this very month. What a coincidence, because rereading them, I feel like they represent a very good, very important mindset in regards to children. They were written for kids and represent a world of adventures and discoveries that lacks any Harry Potter-style trappings. Most of the books contain nothing that couldn’t plausibly happen in real life. There’s no fantasy or magic. An antagonist here and there, but no real villains. The young heroes have some scrapes but are never in actual danger. And they succeed, not because they’re the Chosen One or the son of Zeus or whatever, but because they are smart, resourceful, learned, brave, and commonsensical. And, most of all, because they are allowed to be kids.

The first book, Swallows and Amazons, takes place during the summer holidays in Britain’s lake district. The Walker siblings are chilling by a gorgeous lake, praising heaven that jet skis haven’t been invented yet, when they find a little sailboat, the Swallow, and make it their own. John Walker is the stalwart (if insecure) eldest. Susan is the mother figure, cook, and voice of reason. Titty (yes, Titty; stop snickering, assholes) is the dreamer and schemer whose imagination fuels the others. And Roger is the hyperactive little brother who can’t wait to show you his airplane impression, his loose tooth, and the fact that he’s maybe possibly almost able to swim. Aboard the Swallow, the four kids quickly brand themselves explorers. Their mother (a badass Australian) and father (an absent military man) give their blessings, and the “Swallows” are soon camping on their very own island. Turns out they’re sharing space with Nancy and Peggy Blackett, aka the Amazons, a pair of local sisters who cheerfully despise all things feminine and would rather be pirates. Then there’s the Amazons’ uncle, known as Captain Flint (and based on Ransome himself), who owns a houseboat, a parrot, and a lifetime of cool stories. There’s buried treasure too. There’s everything a child could dream of. 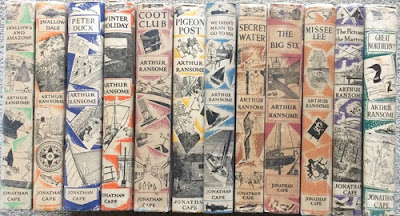 The Swallows and Amazons books are clearly set during a particular period, yet have a timelessness; the kids don’t really seem to age, and Ransome is always vague on what year it is. What’s important is that the books fall between the World Wars, a period when England had realized just how bad things could get, and responded with appropriate brio. Kids didn’t need to be pampered; they could be handed adult responsibilities early. They could be trusted and encouraged. Throughout the twelve books in the series, the Swallows and the Amazons experience one awesome holiday after another. They shipwreck and climb mountains, dig mines and build igloos and accidentally sail across the North Sea. In the fourth book, Winter Holiday, they’re joined by two new friends, Dick and Dorothea Callum, who represent the nerd demographic; they’re bookish and ditzy and their extensive knowledge of astrology proves mighty useful. Ransome clearly wanted his young heroes to be every child, every boy and girl with a spirit. He wanted all kids to read his books and go, Wow, I could do that! I should do that!

This, I think, is what we need more of. I’m not saying kids shouldn’t happily hope for a letter from Hogwarts. But if they go out and explore, build, create, and imagine, they’ll have their very own Hogwarts, Narnia, Terabithia, you name it. The kids in the Swallows and Amazons books make their own world and inhabit it with only minimal chaperoning. Oh, they’re always under the benevolent eye of adults, but never in a stifling way. The character of Captain Flint is crucial; he pops up to mentor the kids and occasionally save their bacon, but he’s still an honorary kid himself. Two of the books, Peter Duck and Missee Lee, feature less plausible stories, with actual danger and high-seas swashbuckling and evil characters (some racism, too...but we must forgive this as a product of its time). We’re meant to believe the Swallows and Amazons themselves “wrote” these two books, an act of metafiction that allows them even more imaginative freedom as characters. Their world is just as cool as Harry Potter’s, but nobody dies and everything is always perfectly fine in the end. That’s what’s great: Ransome isn’t arguing that we should just let kids do whatever they want...but he does insist that they be handed the keys to their own kingdom. 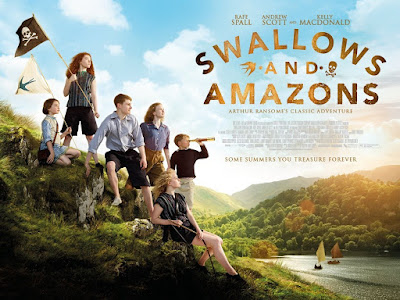 I was thinking the books would make a great movie, but I wondered if it’d ever come to pass in this day and age. Some modern kids would, alas, certainly find Swallows and Amazons boring compared with the usual stuff they read. And Hollywood producers would likely feel the same way. “How can this be a movie? Nothing happens in it!” Stories aren’t allowed to take their time any more. The new movie’s made by the Brits, which is good, but still feels it has to shoehorn in some “cinematic” elements. We have the Swallows, the Amazons, the sailboats, the island. But now Captain Flint is an ex-spy being chased by bad guys, or something, and certain parts of the trailer look like a throwback to the 1990s when most kids’ movies were riffing on Home Alone and/or Free Willy. Also, Captain Flint has gone from a big fat guy in his late middle age to the modestly hunky Rafe Spall. And Titty is now named “Tatty,” for obvious reasons. I guess I’ll reserve judgement, because this is better than nothing, and it does capture the right sort of time and place. I wish they could have preserved the innocence of the book and avoided having adult villains, but concessions must be made.

After all, the movie might lead more kids to the books. And if they can get past the books’ lack of “modern” story elements, they may find themselves inspired. Every one of the young heroes is a fine role model for some age demographic or other. And let’s talk about gender! Not only are there more girl characters than boys (a major rarity in kids’ books with coed casts!), but none of the girls are any weaker or less capable than the boys; they may have flaws (Peggy’s afraid of thunder), but nothing ever stems from gender stereotypes. Susan is the most “girly” girl character, but she’s not portrayed as a wet blanket, a nag, or a scaredy-cat. She can tie nautical knots with the best of them, and then make wholesome rice pudding and afternoon tea. The highly tomboyish Nancy and Peggy, the quixotic Titty, and the scholarly Dorothea likewise avoid typecasting. When combined with the boy characters, this group of pals form a perfect cross-section of childhood, leaving no one out, sharing that unique sense of daring and discovery.

I’ve seen what kids are like when they explore. I’ve watched kids build shelters from tree branches, or take apart computers, or turn over rocks to reveal gross, slimy glory. I’ve been a kid like that. And, yeah, I also see kids lost in iPhones and banality, their parents too listless to nurture their minds, or too paranoid to allow their progeny off a short leash. A lot of what you see in the Swallows and Amazons series has gone dormant. But not extinct. You can’t kill a particular mindset. It’s still there, waiting to emerge from its cocoon. The notion that kids’ lives need a little more wonder, a lot more hands-on discovery and practical application of skills. Teach a kid to cook. Or to identify constellations. Hell, teach a kid to program their own computer game. It’s one step away from the death of the imagination, and one step closer to a group of young friends sailing their own little boats, camping on an island, never out of sight of their parents, but free just the same. If you like, take out the boats and the lake and substitute your own preferred adventure. 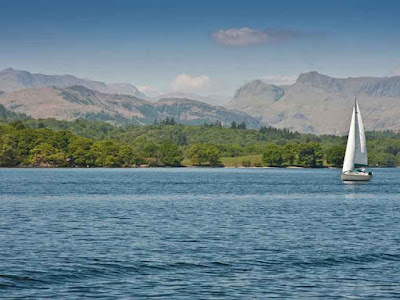 The Swallows and Amazons series won’t solve any societal problems on its own. But it might help. It could ignite a spark in the right child’s mind, or (just as crucial) the right parent’s mind. So when I say “A great series of books for all ages,” that is what I mean. When my parents read it to me, we all gained something from it. Now, lacking kids of my own, I pass on the spark to you, reader. Begin Swallows and Amazons and note what happens. How you surprise yourself. Then read it to a child, or give it to a child to read, and watch their face.