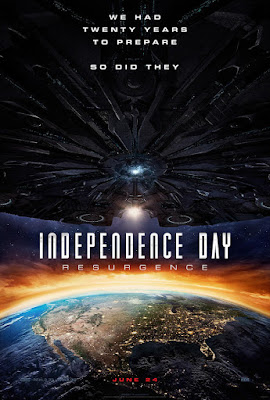 I wasn’t going to review this, but then my dad said he was looking forward to it. Looking forward, presumably, to me waxing poetic about a film in which evil aliens give Planet Earth a good spanking for a couple hours before we spank back at the last minute. A film not unlike 1996’s original Independence Day, which crystallized the “disaster porn” genre and established director Roland Emmerich as its playful hack emperor. It wasn’t the first time the world got destroyed on film, but it was probably the first time modern special effects created a sense of real shock and awe as cities crumbled and Nothing Would Ever Be the Same. Twenty years later, we’ve seen plenty of ID4’s spiritual children, several helmed by Emmerich. And now a sequel. Independence Day: Resurgence would be the worst title in years if Terminator: Genisys didn’t have the category locked forever. Since I have such a nostalgic fondness for ID4, am I gonna be down on its successor?

I mean, I know it got awful reviews. And I pity anyone going into this expecting a “good” movie. Can it overcome sheer, waste-of-time wretchedness and at least be entertainingly goofy and fun? Well, I think I did, more or less. It takes itself far, far less seriously than the first one. It kinda has to, because modern blockbusters are different. ID4 was most effective when it was building dread: portents, everyday life about to be upended, the feeling that something unspeakable was creeping up on our planet. In the 2010s, ain’t nobody got time for that. Resurgence briskly uncorks an alt-history where we recovered from the first alien attack, assimilated their advanced technology, and became a better species as a result. We have solar system outposts, a planetary defense system, tons of neat gadgets. This leads to the same dilemma I had with Pacific Rim: I’m more interested in the backstory than the current situation. I want to know more about the nuts and bolts. Hell, one of the film’s throwaway ideas -- Congolese guerillas fought a bitter ground war with alien troops in ’96 -- would make a damn compelling film all on its own. But Resurgence whips through its establishing scenes with hardly a glance. The new Star Wars had the same problem: too much momentum, not enough worldbuilding. 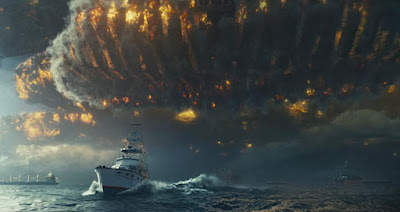 At least Resurgence loves to show off. The film contains wall-to-wall special effects and they all look absolutely groovy. There’s a decent variation from all the dark brown, tractor-tire surfaces we got last time. For instance, a misty wormhole opens near the moon and snorts up a large, cryptic alien sphere. The Clinton-esque President Lanford (Sela Ward) errs on the side of caution and has us blast the sphere with moon lasers, despite speculation from Prof. David Levinson (Jeff Goldblum, yay!) that these ain’t the same aliens as before. Very soon, who should show up but the same aliens as before, in a far huger ship. It’s big enough to straddle the Atlantic Ocean, and does, and let me just say that what befalls the White House this time around made me giggle unreasonably. The new ship has its own gravity field, which vacuums up Singapore and Dubai, then drops them on London. I love how Emmerich constantly strives to outdo himself in city-destruction mayhem -- though here, it’s kind of token. A ship that big should damage Earth irreparably, yet once it arrives, it just kinda sits there, preparing to extract the planet’s molten core and thereby providing the obligatory Ticking Doomsday Clock.

The relative passivity of the aliens allows for another battle, that of the old salts from the first film vs. the sexy young commandos who are onboard to appeal to kids. The old salts win. Goldblum is easily the best player here, delivering every moment with a sly wink. Bill Pullman, Vivica H. Fox, Brent Spiner, and others slip right back into their old roles. The new kids suffer, I’m afraid, because of how thinly they’re all defined. Jake is a cocky pilot. Patricia is engaged to Jake. Patricia is buddies with Dylan. Jake and Dylan are on the outs due to past baggage. That’s about all we get. Oh, and Patricia (Maika Monroe) is the daughter of traumatized ex-president Whitmore (Pullman), and Dylan (Jessie Usher) is the son of the late Steven Hiller (Will Smith, killed off between films due to his high price tag). As for Jake (Liam Hemsworth), he’s supposed to be the main hero and is reasonably bland, but I found him a lot more bearable than in the Hunger Games movies, so that’s something. All these dudes and dudettes form humanity’s last hope -- so we’re fine, because Jeff Goldblum can do anything. 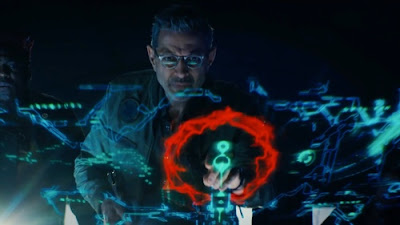 I needn’t bother describing much more of the plot. You probably remember the first film well enough. Having had twenty years to prepare for the second wave of aliens, we are, of course, utterly unprepared, and soon enough, it all comes down to frantic, makeshift plans concocted in dim strategy rooms. There’s time for the usual random subplots, the shittiest of which involves Judd Hirsch and a carload of whiny teens. There are slots for offbeat supporting characters, like DeObia Oparei as a badass African warlord and Charlotte Gainsbourg (no, seriously) as an eccentric linguist who apparently exists because someone asked, “What if there was a second Jeff Goldblum but he was a French lady?” There’s way more room for Dr. Okun (Spiner), who didn’t die in the first film after all and has been retconned into a gay superhero. Some characters perish, but none of the deaths are especially surprising and only one took me by surprise with its sadness (and it’s not at all who you’d expect). The final act seems to be taking a familiar route: pilots infiltrate the alien ship and somebody has to sacrifice themselves à la Randy Quaid. But then the climax goes in an unexpected direction. And it was pretty cool! If only for injecting some novelty.

After helping define the modern blockbuster, Independence Day now looks derivative of all the movies it spawned. I could have used a real dose of character development (poor Vivica H. Fox is onscreen for about two minutes, and her fictional son, Jessie Usher, is almost insultingly boring) -- and, yeah, I wanted more disaster porn. I’m way too into that stuff. Resurgence wasn’t really a disaster movie like ID4. It was a science fiction action something-or-other with a lot of discordant ideas and performances. Only Jeff Goldblum and Brent Spiner hit the perfect balance of doom-laden gravitas and tongue-in-cheek jollity. The question is, did this film even need to exist? I mean, everything has to be a franchise now. Resurgence introduces those two words that make movie scholars scream in anguish -- Expanded Universe -- and teases at least one more sequel. Does the studio care about this property beyond forcibly squeezing forth more revenue? I have no idea, but at least some of the actors care. And I think Roland Emmerich cares; I think he had a whole lot of fun returning to that which gained him his unique reputation. Me, I got what I wanted: a stupid summer movie that was a blast to watch. 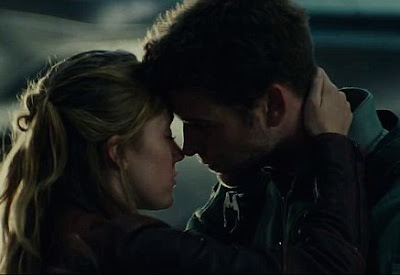 Also, I’m relieved that Colorado hasn’t been attacked by those aliens yet. We don’t really have any famous, signature buildings or bridges, you see. To quote Dr. Levinson, “They like to get the landmarks.” Yes, they do. I like to watch.
Posted by Dang-Blasted at 7:43 PM