--Thus it comes to a close once again. The story ends, the curtain’s drawn, the actors go home, and only a single light is left burning to indulge the ghosts of the theatre. And, yeah, I’m getting all profound and shit, but even a show as loopy as American Horror Story has its profundities. The season finale of Coven was a bit refreshing: nothing really zany happened, the death count was lower than previous seasons have led us to expect, and the ending was...wait. Did they give us a happy resolution? Did Sarah Paulson actually have something good happen to her? What are these strange warm, glowy feelings in my abdomen? Did I watch the wrong show?

--Yeah, the overall mood of the finale was weirdly upbeat a lot of the time. Starting from the beginning. What’s the oddest, yet most appropriate way to ring in the Seven Wonders? A fucking music video! Stevie Nicks drifts about the golden-lit interiors of Miss R’s like the hippest angel in Heaven, lip-synching her heart out. Which begs the question: did she literally sing the song, as a kind of blessing/invocation, or was that sequence a sort of fan-servicey breaking of the fourth wall, a brief acknowledgment that none of this is real? Up for debate. Then it was time for Zoe, Misty, Queenie, and Madison to take on those infamous trials.

--Telekinesis. They moved some candlesticks. Easy.

--Mind Control. A bit of tension here, as Zoe and Madison used their powers to fight over poor FrankenKyle. Madison made Kyle choke Zoe, in a delicious bit of foreshadowing. But everyone passed.

--Visiting the Afterlife. This was where the one truly upsetting thing happened, as the Seven Wonders claimed their first casualty. And it wasn’t who we were expecting. All the girls crossed over, but Misty Day got stuck. Her Hell was a classroom where she had to murder a frog, over and over, while all the kids laughed. She couldn’t wake up. Dawn broke. I was relaxed, expecting a last-minute save. And then Misty’s body crumbled to dust. The most innocent of the witches was lost forever. I am legitimately saddened by this. I guess you could call it a rumination on how the good aren’t always rewarded for their goodness. Poor Misty. Like Nan, she deserved more. 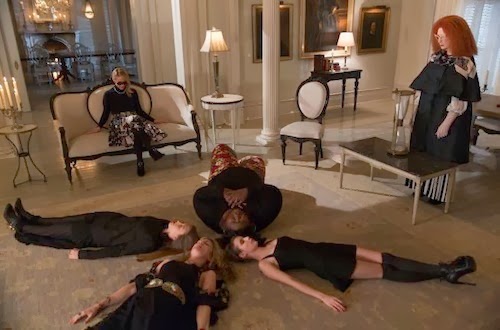 --Transmutation. The high-strung girls all nailed this power, and used it to unwind with some teleport tag. Things went downhill very abruptly when Zoe bamfed herself onto a spiky iron rod and was killed. OOPS. In a moment of sublime bitchitude, Madison was asked to bring Zoe back and instead revived a squashed fly. Good lord. Are all the good witches doomed? Is the coven really going to be cursed with a new version of Fiona? Cordelia and Myrtle despaired, until Myrtle had a eureka moment that you’d think someone would have thought of already: what about the dark horse in the room? The witch who’s literally born of great power, and has never been able to see it within herself? Who is now (almost) free from her debilitating mommy issues? What about Cordelia?

--Pyrokinesis. Cordelia lit a candle with her mind. Simple, but triumphant. She breezed through the earlier Wonders as well. Suddenly, Madison looked worried.

--Divination. The blind seer studied some pebbles and played a hidden-object hunt with great success. Madison, tasked with the same simple game, utterly blew it. She’s not clairvoyant. There’s something she can’t do. So she can’t be Supreme. Pissed and petulant, unable to cope with not having something she wants, the starlet stormed away to ragequit Miss R’s forever. Delectable irony: during her tantrum, she grabbed a cigarette from Anna-Lee Leighton’s silver dispenser, the very object she was supposed to find. HA.

--Finally, Resurrection. Cordelia breathed her sweet breath into Zoe and revived her. At the same time, Kyle was upstairs, strangling Madison to death for manipulating him. RIP, wasted young woman who blew every single chance you were given. Kyle’s done being used. Well, maybe not entirely, because Spalding’s ghost showed up to, er, claim the body. “I’m the help,” he leered, and left the rest of the sentence unspoken: And now, Kyle, so are you. At least Kyle gets Zoe as consolation. Downstairs, Zoe gasped back to life. Cordelia’s eyes were restored....by magic. Her greenhouse bloomed. Ladies and gentlemen, we give you the new Supreme: Cordelia Foxx, daughter of Fiona.

--It was too good to be true. As Cordelia went public, inviting aspiring young witches into the coven, ushering in a new era of witchitude, I waited for something dreadful to happen. Some enemy to swoop in and undo all that happiness. Instead, we got a fiery swansong. Myrtle, who has always acted for the good of the coven, pointed out that she kinda sorta murdered her fellow council members -- and if Cordelia is going to be a legit Supreme, she has to take the bad along with the good. Justice had to be done. It was a lesson, the final lesson, Myrtle had to teach. Thus, Myrtle Snow was burned at the stake. Again. But this time, on her own terms. She’d done her work; she was ready to ascend into what I’m sure was the most fabulous, fashionable Afterlife of them all. Frances Conroy Frances Conroy Frances Conroy Frances Conroy FRANCES CONROY. 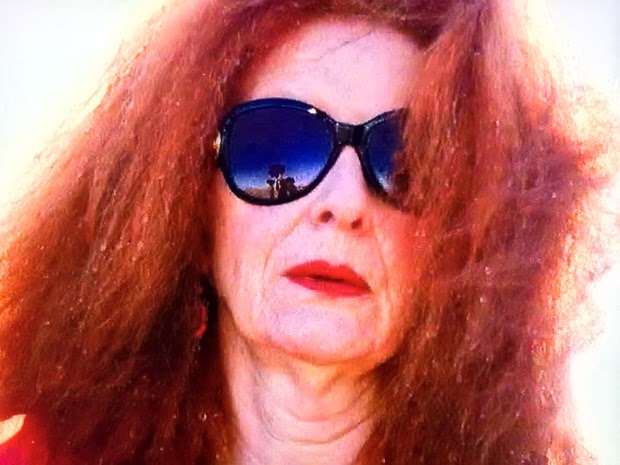 --One last piece of business. Fiona. As I suspected, her “death” at the Axeman’s hands was a big old fakeout. But her true death couldn’t be averted. Skeletal and wasted, she appeared in Miss R’s for a final heart-to-heart with Cordelia. Would Fiona make one last desperate grab at life? No...she was tired. She’d figured things out. So had Cordelia. Their meeting wasn’t one of those sappy, forgiveness-drenched reconciliations, but a regretful acknowledgment of all the mistakes they’d made as mother and daughter. It was powerful. Cordelia could have satisfied herself by killing Fiona in mercy and revenge, but she didn’t. She made Fiona accept death. And did Fiona? Well, after collapsing lifeless in her daughter’s arms, the ex-Supreme found herself in a rustic cabin with a smiling Axeman offering her catfish. To her, it wasn’t a bucolic Heaven but a backwoods Hell. (“Knotty piiiiiiiine!!!!”) There was Papa Legba, laughing. However, I found that scene to be a bit ambiguous. Not necessarily a Hell for Fiona, more a Purgatory. I think that, sooner or later, Fiona may find happiness in that cabin with that man. After all, she has eternity. Her move.

--We ended with a reminder of the beginning. Welcome to Miss Robichaux’s. Enjoy your new career as a witch. Only now, Cordelia is the warm, smiling Supreme. Zoe and Queenie are her faithful council. Kyle’s the butler. And a swarm of eager young girls are flocking in to inject new life into the place, to fill those blank white rooms with laughter and color. Whatever happens next, things are looking up for witchcraft. Cordelia smiles on all those fresh faces. Curtain. 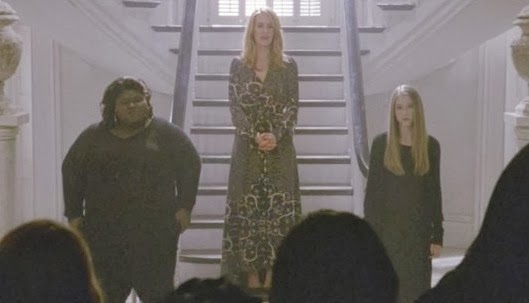 --So what are my final thoughts, my final grade? Well, I loved it, obviously. That said, Asylum was better. This show is always gonna be a bit unfocused, but Asylum managed to pull everything together for a very strong, poignant final act. When it ended, I felt like one big story had been told. With Coven, it felt like a lot of different stories clamoring for time, and at the end, they quickly picked one subplot and tossed aside the rest. This season was unmoored, for better and for worse. Regard how some promising subplots (Zoe’s deadly vagina, Cordelia’s infertility, the immortal minotaur) were dropped early on, as though the show got bored with them. How other subplots (the witch hunters, Joan and Luke Ramsey) existed awkwardly within the narrative and ended without amounting to much. Note how certain characters (Fiona in particular) seemed to change their motives on a whim, and how others (Zoe and Kyle, oy) were diminished, wasted. American Horror Story takes the narrative approach of throwing everything at the wall to see what sticks. It gets frustrating, not gonna lie. I’m especially annoyed that they took two great characters, Madame LaLaurie and Marie Laveau, and got rid of them too early; somehow, I wanted more from their ultimate fate. And I have to ask: what exactly happened to that poor baby in Spalding’s attic?

--So, yeah, this season was a bit structurally weak. Okay, it was very structurally week. But did that make me dislike it? Was I disappointed? Nope! I know this show’s faults. And I accept them. Because the reward is one helluva fun time. I love being surprised and shocked into laughter...or, sometimes, shocked into silence. I love the actresses and actors they’ve found to inhabit their stories. AHS taps into the love of playing a character that’s the reason so many people want to act in the first place. Look at Jessica Lange, Frances Conroy, or Lily Rabe, and see how much fun they’re clearly having. Then look at Sarah Paulson, and see how seriously they still take the material. For them alone, I award the show high marks. And I will keep coming back.

--Season Four! What do we know? Well, they revealed it’ll be set in the year 1950. A ton of faces will likely be returning. It’s probably going to be Jessica Lange’s last season, and she may be playing a German. Maybe. Place your bets. American Horror Story: Atomic Age? American Horror Story: Red Scare? American Horror Story: Invention of the Credit Card? Whatever they choose, I’m aboard. My seat in the audience is reserved. I’m waiting for the curtain to go up again. You’ll always see me here when it does. Because this is my Heaven, and Papa Legba can suck it. 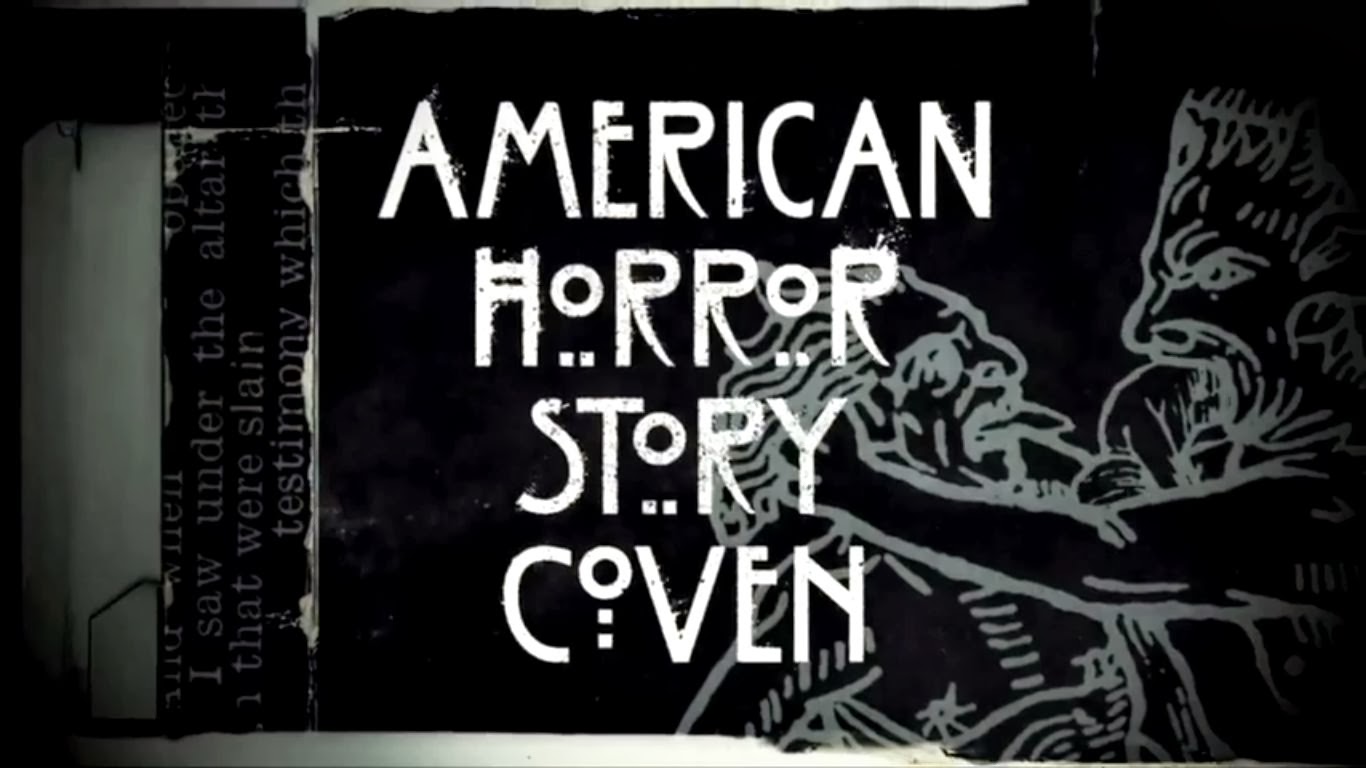