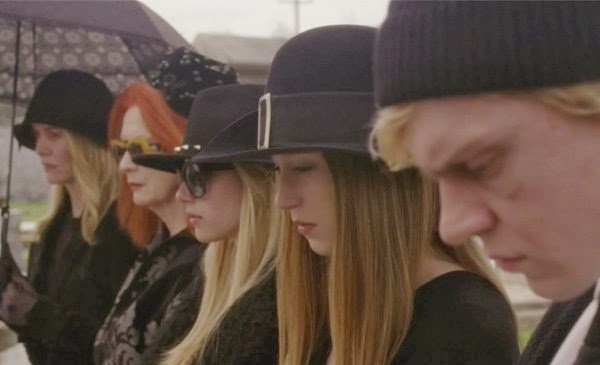 --First off, I had another dream about AHS last night. I dreamed that Madison was trying to kill everyone else in the coven, which she did by causing a train crash. Then she set Zoe on fire. Honestly, I’m putting nothing past this show right now.

--So much for Delphi Trust, I guess. Nice to see the continuing trend of not really taking the witch hunters seriously. Fiona and Harrison Renard agreed to a nice, peaceful meeting to negotiate some terms, and you expected it to be a trap for the witches, but no: Renard was legitimately prepared to show his belly and let the witches win for now. For now. What he didn’t realize was that witches are not businessfolk. They are goddamn witches. Hence, Fiona unleashing her cuddly-wuddly Axeman on the Delphi Trust suits in a hilarious, cathartic massacre. Laveau imbibing a Diet Sprite and then snapping post-murder pics with her phone was, like, the epitome of beauty. And I gotta say, I was impressed by Renard’s totally chill approach to his own death. Dude had class. Now the question is, will Fiona take up the Axeman’s offer to run off and become a cute farm couple? His love for her seems legit. That was the question of the week: to protect the coven, or to abandon it, knowing how rotten it’s become?

--I predict Madison’s going down. Or, I hope she is. I just kind of fucking hate her now, and the way she’s acting -- prancing around like she already owns the joint, treating everyone like shit -- makes me think someone’s gonna re-murder her ass before she becomes even worse than Fiona. Hey, we already know Myrtle has a psychotic streak. Wouldn’t mind seeing it again. It’s funny how the whackjob Myrtle with her melon baller of death and her shout-outs to famous fashionistas is the one person who’s honestly acting for the good of the coven. Well, not entirely, because Cordelia, in her desperation and shame, gouged her eyes out all over again. That twist was easy to see coming, but I’m glad, because I prefer blind hardass Cordelia over whiny, guilty Cordelia. Make it so.

--Queenie’s alive! Because it’d been awhile since an apparently dead character showed up without a scratch! Chalk it up to the fact that as Fiona fades, her witchy power pinballs around, looking for a new vessel -- but in the meantime, everyone’s power levels peak. Which basically means any witch can do any spell as the plot requires it. No idea what role Queenie has to play in the endgame, but I’m not displeased at her return.

--Zoe and FrankenKyle got some actual material this week, and it wasn’t bad. The show seemed to acknowledge that both of them are kinda helpless in the face of the ruthlessness committed by the other characters. Zoe figured out what really happened to Nan, but how could she challenge Fiona and Laveau? Madison dropped some jealous hints that when she’s in charge, Zoe and Kyle are fucked. Then the well-meaning Myrtle offered Zoe tickets to Disney World, insisting that she and her boytoy had to flee before they became either corpses or selfish shitheads. Poor Kyle, as I pointed out way back at the beginning, is a Nice Guy, and his mind has been repaired just enough for him to fear his own monstrosity. How can he function in the real world? Zoe’s there for him, though, and the episode ended with victory music as the two lovebirds hopped onto a bus like something out of a rom-com. Know what? I’m fine with not seeing them again, because they’re superfluous, but also because it would be a neat thing to have these two characters escape the dreadful fate that seems to befall AHS protagonists and win a true happily-ever-after. But with two eps to go, I’m not counting on their lasting getaway.

--The meaty stuff went to Madame LaLaurie this time around; she even got a voiceover! Put back together by Queenie, she was returned to Miss R’s to continue living in servitude and humiliation, and I guess all that Civil Rights footage didn’t take, because she didn’t waste her time disembowling a fresh black man in Spalding’s creepy doll museum. Apparently, this has to do with some sort of vague fascination with human biology, or maybe it’s just because she snapped after encountering some chicken blood one time in 1830; the flashbacks and voiceovers were a bit vague on that. Oh, LaLaurie...it’s like you’re laughing at us for feeling sympathy toward you (can’t deny, her slipping Madison’s zombie poo into the coven’s evening soup was epic). Spalding’s ghost popped up and manipulated LaLaurie into attempting to kill Laveau with Benadryl, which obviously didn’t work, but things did end up with the voodoo queen at the mercy of the vengeful house staff. Funny how, in his own wrongheaded way, Spalding is also trying to protect the coven. And now he has a real-life baby to play dress-up with! Awwwwww! But bad things are in store for Laveau, unless LaLaurie’s more reformed than she thinks. Who’s the bad guy here? I DON’T KNOWWWW. And it’s amusing.

--Two more episodes remain, during which the coven has to figure out who the hell is ascending and who else has to die in the meantime. Will Fiona do the right thing? Will Madison get smacked down? Is LaLaurie a redemption story or not? Who will rescue poor buried Misty (the early graveyard scene suggested it’s gonna be Cordelia)? Are Zoe and Kyle through with all things witchy? Whatever happens, I’d like for the show to break from tradition and not end with pretty much everyone dead. Or a ghost. Or killed and brought back to life. Or killed, brought back to life, then killed again. Or cursed with immortality and buried alive. Or killed, buried, brought back to life, buried again, dug up, killed again....uh.......
Posted by Dang-Blasted at 3:06 PM