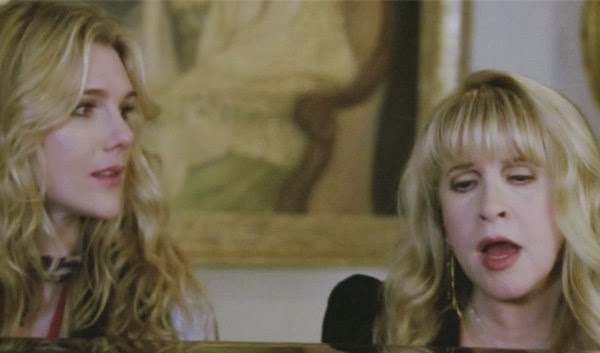 3.10: The Magical Delights of Stevie Nicks

--Can you believe this episode title? I half-expected the showrunners to appear onscreen, kowtowing before Ms. Nicks and wailing, “WE ARE NOT WORTHEEEEEE!!!!” I admit that, while the return of AHS is cause for jubilation, I’d been dreading this ep just a little bit, because I feared it was gonna shoehorn Stevie Nicks into the story for purely masturbatory purposes. Figuratively, that is. I hope. However, this ep was as chilling, shocking, and morbidly did-they-really-just-do-that hilarious as ever. And Nicks’ participation, plus that stupid title, are actually kind of ironic. Those magical delights don’t mean much when surrounded by betrayal and murder galore.

--I’m kinda pleased that the witch hunters of Delphi Trust aren’t overshadowing the coven’s inner problems. Not yet, anyway. After the massacre of her people, Marie Laveau is a far more contrite woman, and now that she’s moved beyond merely hating Fiona, she’s seeing her own, twisted reflection. The two witchy bigwigs proceeded to fuck Delphi Trust all to shit with my new favorite spell on this show, a summoning of the Greek goddess Hecate via bundles of Benjamins and a doomed mouse in a maze. Which somehow caused economic collapse and an abrupt FBI crackdown. Neat! Now Delphi Trust has been toppled, but that just means Hank’s dad, Harrison Renard, is gunning for the witches. Which is what they want? Maybe?

--The whole sisterly bonding thing between Fiona and Laveau reached very bizarre heights when Laveau revealed her backstory: she’s immortal because she sold her soul to voodoo deity Papa Legba (Lance Reddick, even better than I dreamed), who turns up once a year, bedecked in dreadlocks and bones and snorting coke, to demand an innocent soul. The first sacrifice Laveau had to make was her own baby, and she’s been nabbing hapless infants for Papa ever since. Fiona’s ears perked up: immortality, and all she has to do is murder people? Sign her up! Sigh...it’s a little sad to see Fiona reverting to her bad old ways, but after spurning Cordelia for being stupid enough to marry a witch-hunter, Fiona must be feeling like all her newly-built bridges are burnt anyway. Ah, but Fiona’s soul is long-gone, so no immortality juujuu for her, says Papa. So she’s desperate. And she’s not the only one.

--This week, FrankenKyle went and...oh, wait, he didn’t even appear. Because THAT’S HOW POINTLESS HE IS.

--Right, right, Stevie Nicks. Prior to her decision to kill absolutely everyone, Fiona was courting Misty as the new Supreme, sealing the deal by inviting Nicks (who’s a witch, duh) over for drinks and music. Needless to say, Misty was knocked flat (literally), but her special treatment caused Madison to throw enough shade to cause a solar eclipse. Madison sez: I’m more powerful, I came back from the dead, and I’m richer, so why am I not Supreme? And in case we forgot, Madison is a giant, giant bitch. Which is why she lured Misty to a neat jazz funeral, demonstrated her power by bringing the dead guy back to life, then knocked Misty out, stuffed her into the coffin, and told the bedazzled cemetery dudes to inter it. Well, SHIT. No more magical resurrections for our heroes! At least until Misty gets out of that coffin, because she obviously will, because at this point, she’s the only person on the show who isn’t a horrible human being in some way. And that includes...

--Nan. Poor, poor Nan, whom I really loved, and who actually could have been the Supreme, I think. But despite her newfound badassitude and rapidly growing powers (“Put out your cigarette. Now stick it in your vagina”), Nan was just too damn nice to live. True, she laid down a shocking revenge-killing on Joan Ramsey by forcing her to drink bleach, but that was justified. And let me just say that it was a rather abrupt way to end the Ramsey subplot. Now that it’s all over, what was the point of Joan and Luke? I guess they were on hand to instigate Nan’s slide into darkness. But it was all for naught, because when Nan found the baby Laveau had kidnapped, Fiona and Laveau decided Papa Legba might prefer a different flavor of “innocent” and drowned Nan in a bathtub. GOD FUCKING DAMMIT, I WANTED HER AS SUPREME. FUCK. So Nan is yet another tragic character, struck down before she could find true happiness, but maybe she’ll become buddies with Papa Legba and get to be a voodoo demigod or something. She deserves that much.

--Meanwhile, Madame LaLaurie was...oh, wait, she didn’t appear either. Her, I actually missed. I wonder...presumably the cops were all over Laveau’s hair salon, so did they or didn’t they find the living, disembodied head of a reformed racist socialite? I’m picturing LaLaurie’s head on the desk of a bewildered police captain, growling, “Look, I’m only gonna explain this one more time...”

--The episode ended not with a shocking cliffhanger, but with Stevie Nicks singing some more while Fiona listened, crying sweet tears for all she’s experienced in life, and for the shitty human being she’s become. Note the composition: Nicks’ seat at the piano was right beneath the portrait of former Supreme Anna-Lee, Fiona’s first victim. And not her last. Meanwhile, Madison only cares about herself, Cordelia has decided she’s worthless, Zoe might as well be a fucking coat rack for all she contributes to the plot any more, Misty’s in a coffin, and Myrtle...just wants to play her theremin and be all aloof. Jesus, is it gonna have to be Marie Laveau who unites the coven and kicks witch-hunter ass? I’m down. Her stankface alone could cause human flesh to evaporate.
Posted by Dang-Blasted at 10:43 AM