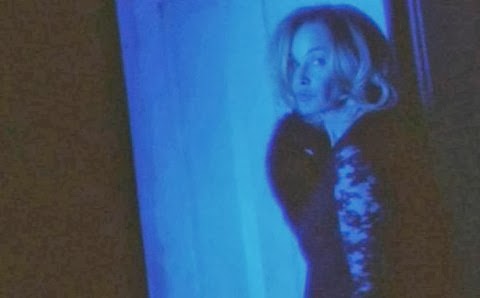 --I can’t decide if this was an amazing ep or an infuriating one. I think I’ll go with amazing, because so many scenes moved me on some level, or at least made me gigglesnort. The infuriating part comes from the fact that a lot of stuff happened that you’d think would have been saved till next week’s finale. I mean, if you take “Go to Hell” at face value, the show just blew its load way too quickly by offing the three women who most make Coven what it is. But I have my theories, so read on.

--For sure, there were many climaxes this week, though none of the orgasmic variety. Seemingly the only thing that didn’t happen were the Seven Wonders, which were set up via a highly amusing silent-movie skit with some cute Salem girls frolicking in a barn -- complete with dialogue cards and dawn-of-cinema special effects. Loved it. Now we know that the Wonders consist of telekinesis, pyrokinesis, transmutation (basically teleporting), transfer of life force, mind control, clairvoyance, and a trip to the afterlife. So, every power we’ve already seen done. And it’s easy for an aspiring young witch to get herself killed attempting the Wonders. Foreshadowing? Probably. Fiona was back to her old plan of making Queenie the next Supreme, or so it seemed, but Queenie had more important things to do...

--Such as bidding farewell to Madame LaLaurie. Maybe. Queenie figured out that LaLaurie had gifted New Orleans with many, many, many separate pieces of Marie Laveau, then went to confront the evil Grande Dame in her old house where, hilariously, LaLaurie had taken over as tour guide and was painting a far more flattering picture of herself for confused tourists. If this was LaLaurie’s swansong, it was a doozy. She revealed to Queenie that her earlier tears were not because she’d seen the light, but because she despaired to exist in such a “degenerate” world. The scary thing is, her words rang true in an awful kind of way. An argument could be made that racism still thrives, just more insidiously, disguised as sympathy. When Queenie suggested redemption, LaLaurie just laughed: she’d seen how little forgiveness matters in a world where you can just cry crocodile tears on TV, especially if you’re famous. Ouch. It takes someone from the past to point out the demons of the present. It was a good speech, but it bit LaLaurie in the ass, because Queenie had already struck a deal with Papa Legba during a trip to a fried chicken-themed afterlife, and she proceeded to truly, actually, for-realsies, stab LaLaurie to death. Maybe.

--Queenie was one courageous figure this week. The other was Cordelia, back in badass mode, whose powers were initially reluctant to show themselves. It took a tender moment with Fiona to open Cordelia’s third eye once again, and what did she see? A nightmare. Miss Robichaux’s strewn with the butchered bodies of all the witches, and a wraithlike Fiona smoking over Cordelia’s corpse. The final, desperate act of a desperate, dying woman. Cordelia saw some other useful things too. Where Misty was buried, for instance. And Fiona’s plans for the Axeman. We all thought he was gonna desert her, but nope: it was Fiona who had decided to jet off to warmer climes and leave her undead sweetie-pie to rot. Cordelia paid the Axeman a visit and showed him proof. He reacted about how you’d expect.

--Zoe and Kyle are back! BOOOOOO! Seriously, I wanted them to be gone for good, I really did. I wanted this show to make a statement about how power and glory aren’t for everyone. But, no, Zoe decided she’s the Supreme after all (after reviving a dead vagrant who really should’ve stayed dead) and dragged her useless frankenboy back for more scenes of hanging uselessly in the background. Being useless. One episode left to make these two matter, show. Just saying.

--Despite all the Emmy-worthy material being tossed around by Lange, Bates, and Bassett this week, my favorite scene was when Misty returned to the coven and decided her usual peace-loving ways could take a backseat in favor of beating the ever-loving snot out of Madison while the other witches watched with varying degrees of relish. (Cordelia’s icy “I’m good” when the catfight began was beautiful.) Good lord, was that satisfying. And not exactly out of character; remember way back when Misty murdered some rednecks with her crocodile buddies? She’s a true witch, all right. Also awesome: the Axeman popped in, all bloody and vengeful, and every single witch in the coven smacked him down. It was then Cordelia’s turn to be bitten in the ass, as she realized the blood came from her mother...

--Yes. Fiona Goode is dead. Maybe. Her final confrontation with the Axeman was shot largely in a single take and was yet another example of how good this show can be when it tries. All Fiona’s demons, her inner conflicts, her bitterness and fear. All there. She was spiteful. She was sad. She was self-pitying and self-loathing. Still stuck in her selfish cycle. And the Axeman couldn’t take it any more. He killed her. And then, back at Miss R’s, the young witches of the coven drew knives and stabbed him to death, just as their predecessors had done. And Cordelia wept, because her modern, liberal mindset just doesn’t work on witches; she can’t even stick to it herself. To be a witch is to shed blood. Fiona demonstrated that best, and now she is gone, fed to the gators, nothing left but an unfinished painting. Maybe. LaLaurie and Laveau are gone too, banished to a hell that looks an awful lot like LaLaurie’s torture attic. One of them is in a cage, forced to watch her mistreated loved ones suffer. The other one is the torturer, forced to cause pain and anguish for all eternity, trapped by her own rage. Papa Legba watches and laughs. Maybe. 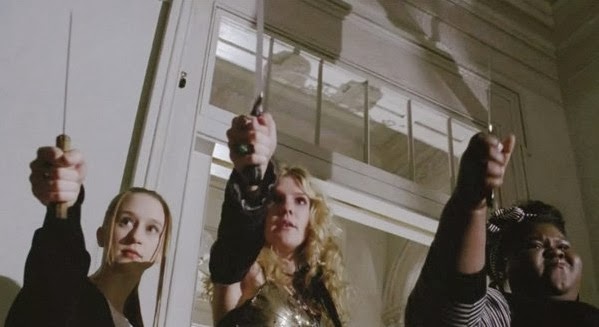 --Why all the maybes? Because I just don’t quite buy that this is the end for these women. I want to believe this show is smarter than that. Fiona’s end in particular seemed way too premature and way too ignominious. Here’s my theory. Two theories, actually. The final episode will deal directly with the Seven Wonders, one of which is a voyage to the afterlife. I suspect that said voyage will allow more closure for LaLaurie and Laveau, a chance to give both of them a more definitive kiss-off. As for Fiona, I wonder if she might be playing a long con. What if the vision she gave Cordelia was a hoax? What if she tricked the Axeman as well, muddled his mind into thinking he’d killed her? What if she is indeed planning to run away, but for the good of the coven? Cutting ties with the witches by making them believe she is dead and digested? Letting them start afresh, with her shade haunting them as an example of what not to do? I’d like to believe this is the case. We shall see. Oh, yes. We shall see.

--Final shout-out to Priceiswrong on TV.com. Not only are his photo recaps of Coven hilarious, they have provided me with many of the pics for my own recaps. I have celebrated by sticking extra photos in this post! And the next one.
Posted by Dang-Blasted at 12:19 PM