Know what I haven’t heard much about recently? That debate over whether video games can be art. I’d ask if my side won, but during the debate it became pretty clear that everyone was gonna have to agree to disagree. It all depends on whether you believe art can only exist for its own sake, and whether anything with an “agenda” or “use” loses the right to be art. I don’t believe that. I believe a video game, a car, a building, or a gourmet dinner can be art if they stir our senses and emotions. I think history will prove me right. Sorry, Roger Ebert. I love you but you were wrong.

On a somewhat related note, some of the games I played last year stirred my brainbox, and I found myself developing some interesting theories about stuff in the games that went unsaid. Hell, most of my theories are no doubt completely wrong and serve only to demonstrate how even a video game can have multiple interpretations. You know, like ART. Please enjoy these odd little interpretive suggestions; I’m proud of them.

SPOILERS AHEAD! WATCH YOURSELF!

Anodyne: The Game Is About Making a Game

Anodyne is one weird little trinket of a game -- a fake-retro adventure in the style of, say, early Legend of Zelda in which you play an archetypal hero saving an archetypal realm from evil -- armed only with a broom. The game absolutely refuses to make sense. The overworld is pretty standard -- green fields, cliffs, desert -- but from it you access some utterly bizarre realms, such as a black-and-white suburbia populated by ghosts and dead bodies, and a trippy sci-fi fortress ruled by friendly talking pyramids. There is no thematic or spatial connection between these areas. Many of the characters and bosses speak as if they’re ordinary people in some dude’s ordinary life. Are you that dude? Since the main character never talks, we don’t know. If you die and then decline to continue the game, you appear in a plain-looking bedroom. So is the whole game a dream? A metaphor? If the latter, what the fuck does it signify? The game’s so obtuse that you could pick any explanation you wanted.

And here is mine. I believe that Anodyne is about the creative process -- the very act of making a game (or a novel, or a painting; pick your poison). I believe this because I am a writer of fiction, and the arc of Anodyne is familiar to me. You construct a story, beginning with stock elements, then embellishing the framework with distinct details. Some stuff doesn’t work, while other stuff appears from nowhere and surprises you with its brilliance. You work in elements from your own life, facts you find interesting, people who become characters. The initial idea may be altered and twisted beyond what you imagined. It’s like the guys who made Anodyne just took every idea they had, every boxcar in their train of thought, and stuck it in there to demonstrate where the process of gamemaking took them. They got frustrated, they slacked off, they changed their minds -- and it all went into the final product. That’s pretty metaphysical and probably too corkscrewy of an explanation, but like I said, this game refuses to explain itself. So why not? It’s a game about a game. 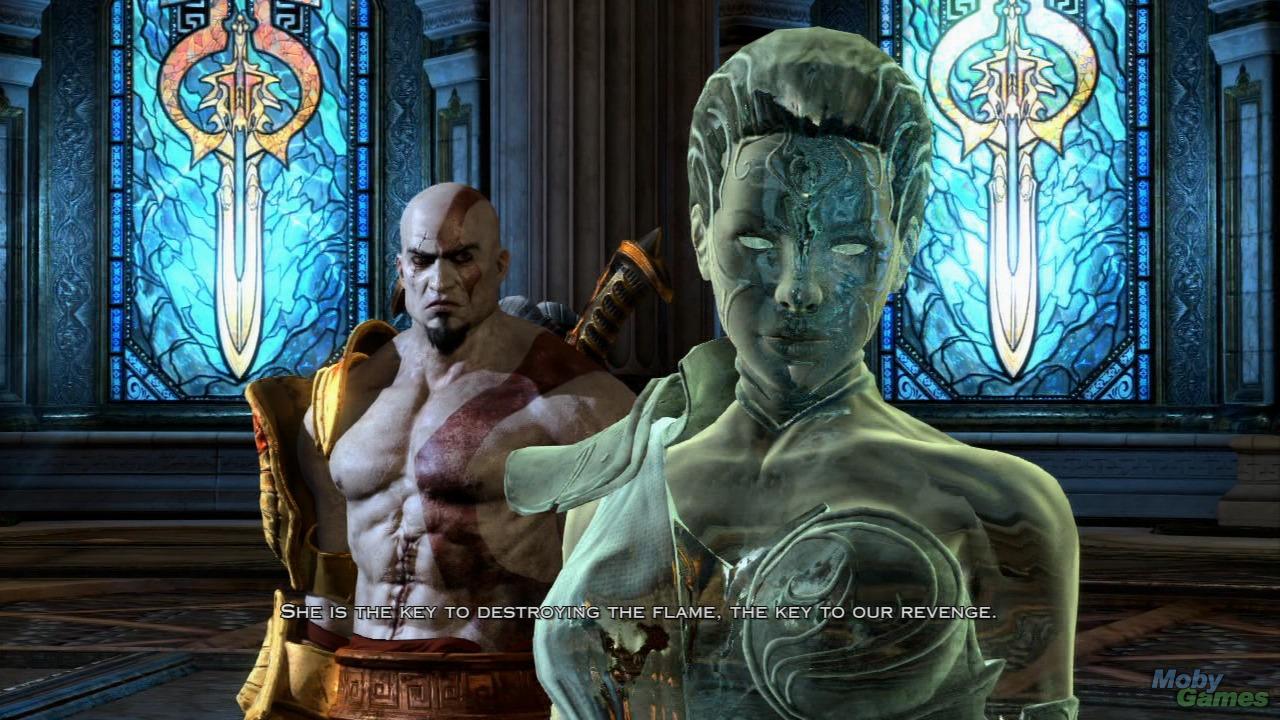 In the third God of War installment, main protagonist Kratos kills all the Greek gods. Allllll the Greek gods. (Well, except for Aphrodite, who merely gets done in by Kratos’ presumably tiny penis.) He is aided in his odyssey of murder by Athena, who he killed in the last game, but who seems cool with that. She appears as a kind of mystical green Force-ghost, giving Kratos advice and pointing him in the right direction as he seeks Pandora’s Box. At the end, after killing Zeus, Kratos learns he has become the vessel for Hope, the one good thing within the box. Athena demands that he turn Hope over to her so she can rule the world with it. Instead, Kratos kills himself, thwarting her plans. The problem I have with this scenario is that they never explain why Athena can stick around as a mystical ghost and none of the other gods can. What makes her special? It ain’t her goodness, because she turns out to be kind of a gigantic bitch. What?

My theory is that the goddess of war and wisdom (oxymoron, lol) is truly dead and gone, and that the “Athena” who appears in God of War III is a hallucination experienced by the deeply unhinged Kratos -- basically a manifestation of his own conscience. His self-loathing stands in his way, so his brain conjures up an image of someone he respects to act as a motivator. He’s tricking himself into continuing on his terrible quest by making himself believe Athena’s got his back and knows all the answers. Then at the end, when Athena wants to claim Hope for herself, it’s really Kratos struggling with his own desire for power, with the devil on his shoulder telling him he could rule the human race. But he’s just noble and/or nihilistic enough to reject the idea and hand Hope over to humanity so they can figure things out for themselves. In other words, the last power-hungry god Kratos kills is...Kratos. Because we need to evolve without powerful assholes dictating our fates. And when Kratos dies, Athena vanishes, because she was never there to begin with.

Thieves In Time: Sly Cooper Is His Own Ancestor

Okay...out of all these theories, this is the silliest and least convincing. But when it occurred to me, I could not leave it alone. It won me over with its utterly bonkers logic. I’ve written plenty about the fourth Sly Cooper game, but let’s talk about the ending. It is a cruel ending, because it sets up yet another sequel that may never exist. After defeating his latest foe, Sly winds up...wait for it...lost in time. His allies have no idea where he went or how to find him. But we’ve got an inkling. If you get full completion on the game, you’re treated to a bonus scene in which Sly wakes up to find himself stranded in ancient Egypt. Cool, so the probably-never-to-be-made fifth game will have an Egyptian level! But I think it may be way more than that.

The franchise has heavily referenced Sly’s various ancestors, skilled raccoon thieves from different time periods. One of them is the ancient Egyptian thief, Slytunkhamen. According to the Sly Cooper wiki, he is the original creator of the Thievius Raccoonus, the holy bible of thievery. He also had a son, Slytunkhamen II. So here’s my crazy-ass theory. Sly Cooper isn’t descended from Slytunkhamen -- he is Slytunkhamen. I think that when he was stuck in ancient Egypt, he renamed himself and set about beginning the Cooper legacy. And he was there long enough to have a son, continuing a line that would eventually lead to.....himself. How’s that for a paradox? I don’t have a shred of concrete evidence to support this. Well, except for the name: Slytunkhamen. Coincidence?

Now, it appears Slytunkhamen didn’t begin the Cooper lineage. One known ancestor predates him: Bob the Cavecoon from Prehistoric times. But I can work the theory around him in a couple ways. Perhaps Bob’s own lineage produces the female raccoon whom Sly falls in love with, and knocks up, in ancient Egypt. (It can’t be Sly’s regular love interest, Carmelita Fox, because they’re different species.) Or, alternatively, perhaps Sly wins the affection of Slytunkhamen, gets “adopted” by him, and becomes Slytunkhamen II, going on to build the hidden vault where the Coopers keep all their stolen treasures. Is it weird, how much thought I can put into this? It serves to distract me from the fact that the fifth Sly game will likely remain a dream in my head. Sigh. 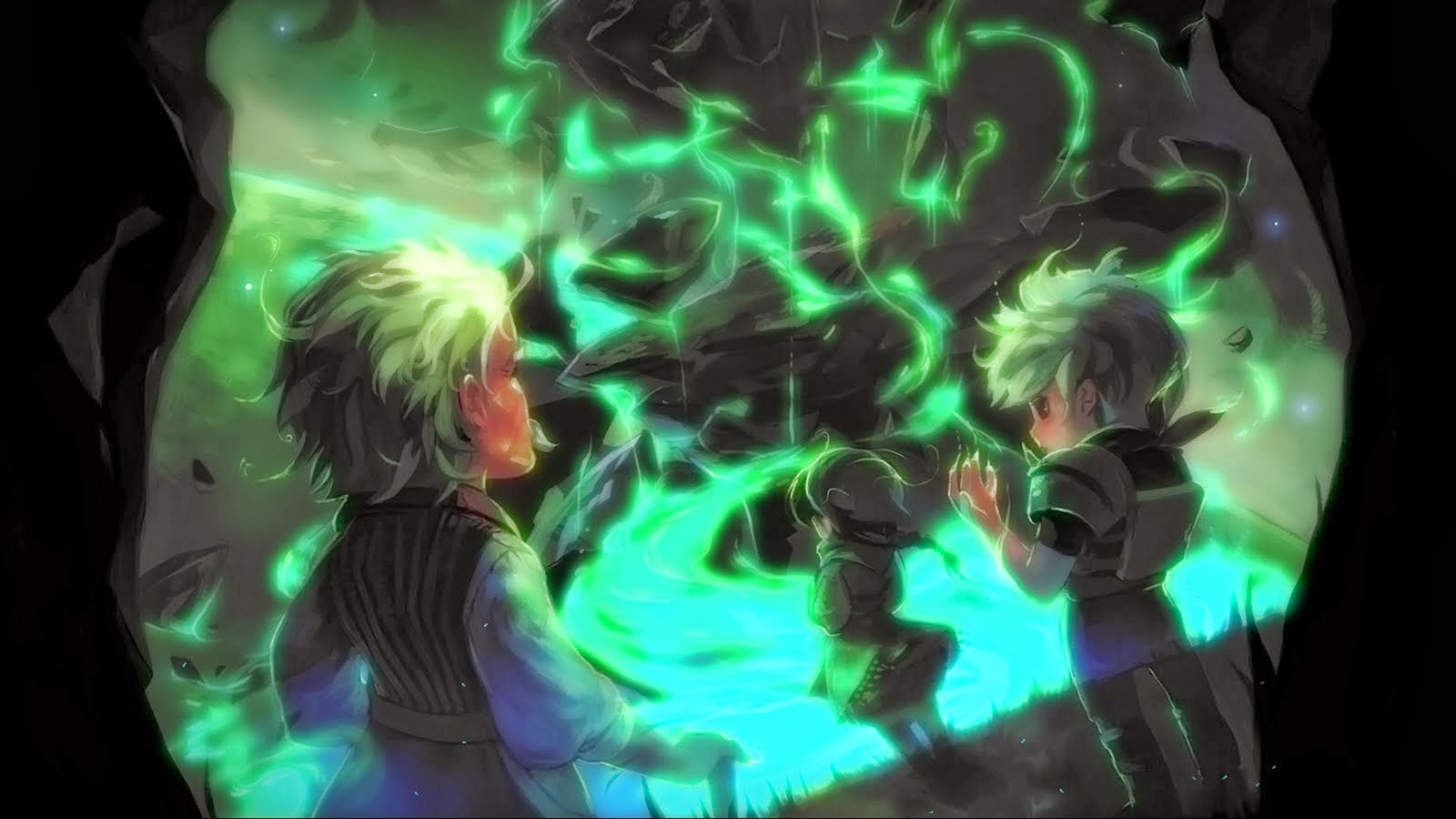 Bastion: Rucks and The Kid Are the Same Person

I’ve saved the best for last; this was the theory that kicked off this blog post, and it’s the one I most think could be legit -- a possible easter egg from the gamemakers. In Bastion, you play as a voiceless kid (known, creatively, as “The Kid”) who awakens to find his world has been destroyed by a cataclysm. Soon enough, The Kid meets an elderly man named Rucks, who also narrates the game. With Rucks’ mentoring, The Kid is able to build the Bastion, a kind of combination stronghold and secret club house, from which civilization may be repaired. There’s a lot of plot after that, involving two warring nations, betrayal, secrets, romance, etc. Through it all, Rucks is there, guiding The Kid to success. And why?

Because Rucks is The Kid, all grown up.

I really, really believe this is true. First off, their physical appearances are similar enough; The Kid even has white hair. Secondly, Rucks helpfully tells us The Kid’s entire backstory. Did he learn it from The Kid? Nope -- he lived it. The Kid is a soldier-guard for the city of Caelondia and Rucks, we eventually learn, was a military engineer who designed some nasty weapons for Caelondia -- you can imagine such a career path from child to adult. But the big giveaway is at the end. You have a choice: you can abandon Caelondia to ruin and set off to explore the world, or you can turn back time, resetting the world to before everything went to hell. However, if you choose the latter option, Rucks warns that all knowledge since then will be lost, and there’s nothing to say the same calamity won’t occur all over again. And he should know. Because he’s seen it. He was The Kid. And when he turned back time, he somehow wound up in some sort of loop, retaining his memories, continuing to age. Perhaps he’s witnessed the wrong choices made over and over. Now he’s trying to fix things permanently by mentoring and coaching his own past self. When I played Bastion, I turned down the time-reversal option because I believed it to be unwise: everyone would just relive their mistakes. And that’s what I believe Rucks is trying to tell you. You who are also him.

I love video games. Can you tell? Can’t wait to see what gaming treats come next. And what secrets may lie between the pixels.
Posted by Dang-Blasted at 7:11 PM