To Squee Or Not to Squee: Bobby Dollar 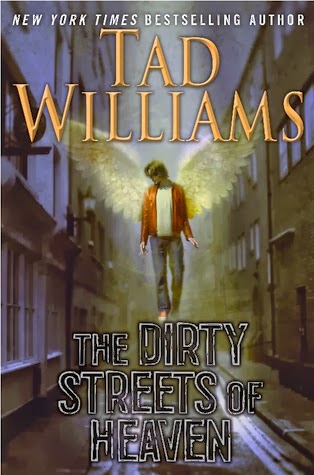 I’m working on a fourth Cautious Enthusiasm post, but in the meantime, here’s something from the first list!

I love to read, but there are very few authors of whom I can say I’ve read their entire body of work. Hell, I worship Neil Gaiman, but I’ve never gotten around to Stardust, mainly because it looks like something silly he scribbled down in between official projects. But talk to me about Tad Williams. I dare you. I’ve read every damn adult novel he’s ever published, and loved each one. It’s partly because, rather than whip out a bookshelf’s worth of quickies, he’s published a modest number of books, all of which are gi-freaking-gantic. I suspect he’d feel unworthy of his ancestors if he ever published a book that had fewer than four hundred pages. And I devour long books like Adam Richman devours Texas-themed steakhouse challenges. Williams is probably best known for traditional fantasy, but the man ain’t content with a single genre. Thus far, he’s written three series: Memory, Sorrow & Thorn (Tolkien-style high fantasy), Otherland (ridiculously epic cyberpunk), and Shadowmarch (more Tolkien-style high fantasy), as well as the standalone novels Tailchaser’s Song (like Watership Down but with cats and way weirder) and The War of the Flowers (best described as “fairy tales meet heavy metal”). Now he’s doing something brand-new. Well, to him.

It’s urban fantasy! A genre I find slightly tiresome because...well...it tends to all look and sound the same to me. Oh, look, we’re in a noir cityscape and everything is dark and gritty, but there’s also supernatural creatures and magic and shit! I’d put Tolkien-style as the most overdone fantasy genre, but urban is close behind. That’s why I was cautiously enthusiastic: I knew I’d enjoy anything by Williams, but the idea of badass angels and demons who keep silver-bullet-shooting magnums in their trench coats is so tired. Hellblazer did it. Dresden Files did it. Night Watch did it. China Miéville has done it several times in several ways. Those are just the examples I don’t have to look up. And let’s not forget that the current market is swamped with repetitive romantic tripe in which some streetwise woman or girl is armpit-deep in vampires, werewolves, demons, immortals, faeries, genetically enhanced superhunks, blah blah blah blah blah. I really wanted Tad Williams to try a less abundant genre. But we’re resigned, so how does his “Bobby Dollar” series compare?

Based on one book, I like it fine. If it’s gonna embrace urban/biblical fantasy clichés, at least it does so with some flair. Our hero is Bobby Dollar, a wry, likable dude who inhabits the parched, history-stung metropolis of San Judas, California. Bobby’s seen a lot in his life...and his afterlife. You see, his official name is Doloriel and he’s an angel. Heaven, Hell, angels, demons -- all exist. Thankfully, Williams doesn’t waste time with logical explanations for any of it. It all just is, and your average mortal is conditioned to ignore the celestial and infernal beings duking it out right under his or her honker. Bobby is an advocate, basically a divine lawyer, who appears on behalf of the recently-deceased and argues that they should go to Heaven rather than Hell. When he’s not working, he hangs out with his angel buddies and drives gorgeous old cars. As you’d expect, weird things start happening. Certain deceased souls are beginning to vanish, and neither Heaven nor Hell knows where they’re going. A demonic advocate is horribly murdered. A monstrous shadow-beast begins hunting Bobby to the ground. There’s a mysterious MacGuffin that everyone seems to think Bobby possesses, even though he doesn’t even know what it is. There’s a love triangle, complicated by the fact that one of the female elements is a drop-dead gorgeous demon. There’s gunplay and sex and comic relief and a tangled plot with many red herrings. It all gets the job done.

I admire Williams’ ability to change his narrative voice. He excels at the overly arch fantasy tone (“I am undone, sir!” cried Briony tremulously. “Would that I could but know your true feelings!”), but with Bobby Dollar, he shifts easily into a modern, snarky voice. I believe this is the first book he’s ever written with a first-person narrator, but you wouldn’t know it. Bobby’s a fun guy, wisecracking but never grating. His love affair with San Judas is palpable, and his flair for rule-breaking is refreshing if typical. Williams surrounds him with an entertaining mix of angels, demons, ghosts, clueless mortals, and even stranger entities (Bobby’s information broker is a reverse were-hog; it’s complicated). As with most noir, there’s a long list of possible suspects, and it’s likely that more than one dirty deed is underway, and everyone has a secret to tell, and so forth. The difference is that Bobby knows the clichés himself, and keeps his damn eyes open. Well, most of the time. The narrative gets a bit weaker in the second half when Bobby gets cozy with the aforementioned gorgeous demon. He does that annoying thing that male protagonists do where he can’t get over his romantic conquest, and -- recite with me! -- the more she pushes him away, the more he wants her. Because women, even strong women, are somehow defined by how much a man wants them. Come on, Tad, that’s old-school chauvinism, and the annoying thing is, it’s possible he’s doing it on purpose because it’s another noir archetype. The Hero and the Dangerous Woman. Tale as old as time.

Anyway. I still wish Williams had tried something off the beaten path, but his take on urban noir fantasy is quite enjoyable. The Dirty Streets of Heaven is the first in a trilogy about Bobby’s escapades, and the ending solves the mysteries that need solving while establishing the footwork for the sequels. I’ll read them for sure. Honestly, Tad Williams would have to drop the ball pretty hard for me to not read his work. I respect him for genre-hopping, for crafting incredible epics, and for keeping fantasy literature from sliding entirely into the mire of Forgotten Realms bullshit. Keep fighting the good fight. Maybe I’ll be able to join you one day.