OOOoooOOOoooOOO! It’s Halloween! No it isn’t! Not at all! But considering my fixation on the horror genre, we might as well go ahead and make every day Halloween here in Dang-Blasted land! Time for a third batch of weird, random, largely unwarranted theories about what’s really going on in certain video games! (Check out the first and second posts too.) Just take care -- these games are scaaaaary and shit! 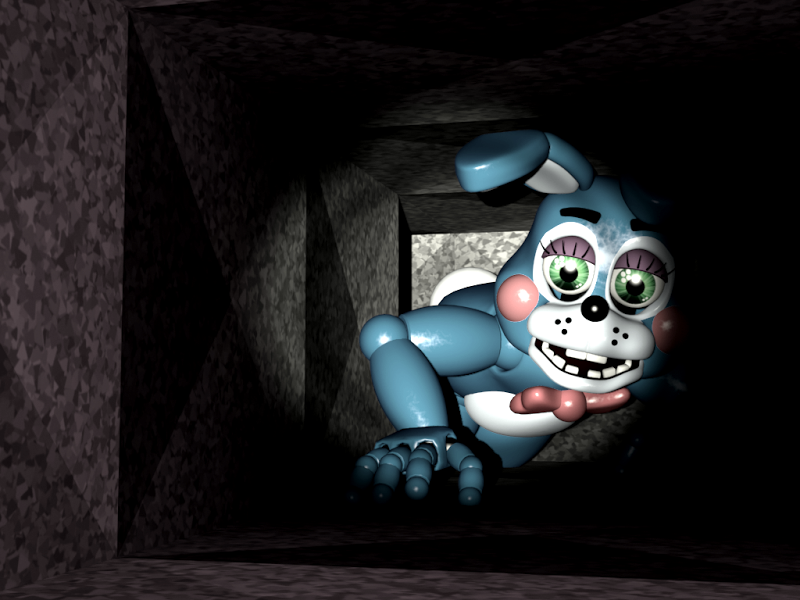 With three games out and a movie on the way, Five Nights at Freddy’s is certainly one of the speediest underdog success stories. The games are cool in how they tease at what’s really going on, practically inviting fan theories. Malfunctioning robo-furries run amok, or something more? Well, FNaF 3 neatly sabotaged my cool theory by confirming it: the animatronic mascots contain the ghosts of children, all of whom were murdered by a sinister man known only as Purple Guy. Cool, now let’s back up to the second game, a prequel in which you play as nighttime security guard Jeremy Fitzgerald. Each night, psychotic mascots roam the halls and attack you, and it’s implied that a police investigation into the disappearance of several children is happening concurrently.

Using the almighty rule of “Why the hell not?” I theorize that the mascots are so intent on killing you because you killed them first. Jeremy Fitzgerald and Purple Guy are one and the same. After all, a security guard would have thorough knowledge of Freddy Fazbear’s Pizza, the better to lure children to their doom. Guess Jeremy didn’t count on the children’s spirits possessing Freddy, Bonnie, Chica, Foxy, and the rest. You’re not a hero; you’re a loathsome murderer facing ghostly vengeance. This would also explain why the mascots wage war on a different security guard protagonist in the first game: it takes place years later, but the children’s ghosts still associate the guard with the man who killed them. FNaF 2 ends with the restaurant being shut down and Jeremy getting a promotion, probably to his relief. But, as the third game showed us, Jeremy met a ghastly fate and became a haunted robot himself. As well he deserves. Creep. 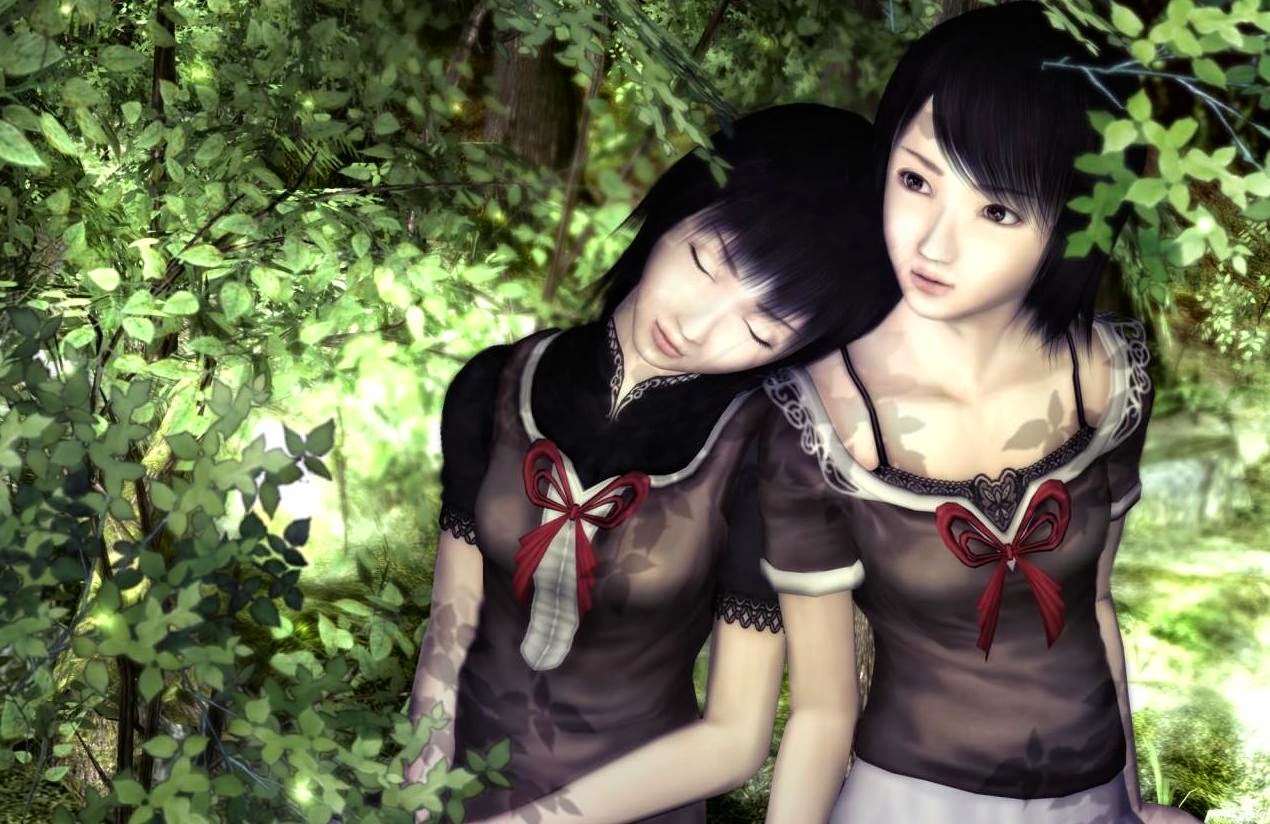 I had a good theory about the Fatal Frame games as well, until I replayed the first one and realized I was wrong as fuck. But never mind. In this scary-ass series, you explore haunted spaces and battle hostile ghosts with a specialized camera. The second game, Fatal Frame II: Crimson Butterfly, focuses on twin sisters Mio and Mayu Amakura, who become trapped in a ghostly village. You play as Mio, the capable "younger" sister. Mayu, who is emotionally fragile and crippled from a childhood accident, is lured deep into the village by spirits and must be routinely rescued. Long story short, the village was massacred due to a botched ritual in which one twin sibling must kill the other. A portal to Hell stands open, and in order to close it, the ritual must be completed, with Mayu as the sacrificed twin. Heavy stuff.

Okay. What if Mayu’s already dead? What if she’s a ghost the whole time? And what if Mio knows it? The accident that crippled Mayu as a child occurred when she fell down a ravine while chasing Mio. Let’s say the fall actually killed her. Mio grows up alone, wracked with guilt at having (in her eyes) gotten her sister killed. However, when she returns to the same forest, whom should she find but Mayu’s lingering spirit. She routinely sneaks out to the forest to be with Mayu (the game never mentions the twins’ parents or how far they are from home), and because ghosts aren’t bound by the laws of the living, Mayu appears to age along with Mio. Mio feels responsible for Mayu and wants to protect her, even knowing she’s dead. Play the game and you’ll find little to contradict my theory. Plus, Mayu’s knack for vanishing at odd times and getting into and out of locked cells makes more sense if she’s a ghost. In the game’s canonical ending, Mio kills Mayu and the village is released from its curse. And by “kills,” I mean Mio finally lets go of her guilt and allows her sister to pass on to the next life.

(PS: If you must know, my original theory was that Mio and Mayu were the granddaughters of Yae, a girl who escaped from the cursed village. However, Yae appears as an older woman in Fatal Frame 1, which I had forgotten, and...yeah. My theory fell apart. Good thing I formulated a Plan B.) 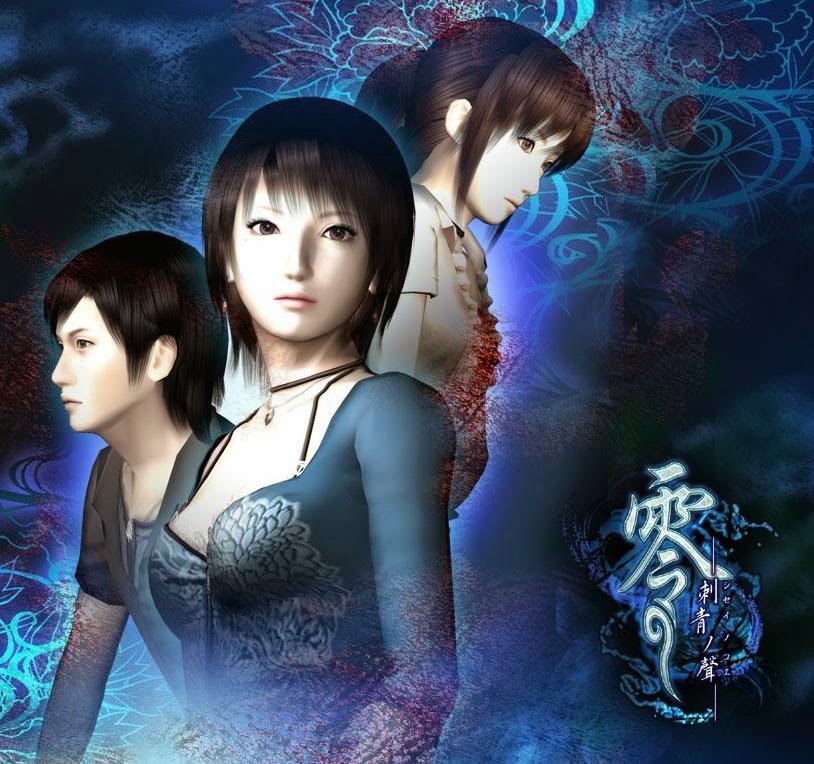 Fatal Frame 3: Two of the Main Characters Are Dead

One big hitch with the whole Mayu-being-a-ghost thing is that the next game in the series, Fatal Frame III: The Tormented, features Kei Amakura, the uncle of Mio and Mayu, as a main character. And Kei makes it pretty clear that Mayu did not die as a child. Well, shit...

Wait. What if Kei’s dead too?

And why stop there? I theorize that the main protagonist, freelance photographer Rei Kurosawa, is also dead. We see Rei dealing with the aftermath of a car crash in which her fiancée was killed. In my version of events, Rei also died, but continues to haunt her house because her grief serves as a ball and chain tethering her to the living world. What we have is a Sixth Sense scenario: Rei and Kei don’t realize they’re dead. Rei’s assistant is Miku Hinasaki, the heroine of Fatal Frame 1. Miku is very much alive and, I think, is trying to help Rei move on. With her psychic prowess, Miku became a kind of ghost-whisperer following the events of the first game, and has been “hired” to exorcise the house of Rei’s ghost. The similarly dead Kei, who knew Rei’s fiancée, is yoinked into the mix, and, due to his limbo state, is confused about past events and doesn’t remember that Mayu died as a little girl.

Is that weak? Well, I think it works. The actual plot of The Tormented is a lot more convoluted; all three protagonists wind up trapped in a dream-space that is dangerous to both the living and the dead. I haven’t played the game in ages (and never finished it, thanks to the fucking Kusabi), so maybe this theory doesn’t hold up, but it’s a neat way to interpret the events as they unfold. Who you gonna call?

The Evil Within: Sebastian Knows the Whole Damn Story

Meanwhile, in an entirely different microcosm of the Japanese horror biosphere...The Evil Within. Which I actually enjoyed a lot, flaws and all. In this blood-soaked romp, you are Sebastian Castellanos, a hardboiled detective with a Dark Past and Nothing To Lose, who investigates a hospital massacre along with two other cops, Juli Kidman and Joseph Oda. All three are shanghaied into a fucked-up nightmare world, which (EXCEPTIONAL SPOILER ALERT!) is being generated by a mad scientist named Ruvik. Long story short, Ruvik invented a machine that could link people’s minds, whereupon his colleagues betrayed him, scooped his brain out, and used it to power his own machine. Ruvik now seeks to escape by possessing a living body. Also, Juli Kidman is part of a mysterious organization trying to take Ruvik down. Sebastian discovers all this very gradually...or DOES he?

Well, yes. But here’s the thing: I think Sebastian knew everything already. He knew about Ruvik, about the machine, about Kidman’s real motives. See, we eventually learn that Sebastian’s daughter died under mysterious circumstances, and his wife, a fellow cop, became obsessed with uncovering the truth. The wife vanished, leaving all her notes and research to Sebastian, who couldn’t get his superiors to listen to him. I think Kidman, recognizing Sebastian’s potential, contacted him and his partner, Joseph, and recruited them for the highly dangerous mission into the machine...into Ruvik’s mind. When they arrive at the hospital at the game’s start, they’re already plugged in. (Cue Inception saxophone.)

The problem is, entering the machine caused Sebastian to suffer brain damage. He forgot everything he’d just learned. Throughout the game, Kidman and Joseph, who know the truth, are subtly trying to make Sebastian remember. They can’t tell him outright because he won’t believe them, and there’s no time to convince him. He has to remember on his own. Tatiana, the cryptic nurse who appears in Sebastian’s personal psychic “safe zone,” is also an agent from Kidman’s group (she is glimpsed outside the machine at the game’s end), and does her part to nudge Sebastian toward recovering his knowledge. At the very end, when he (maybe) defeats Ruvik and escapes the machine, it all comes back to him...possibly too late.

One little hitch: late in the game, we see Kidman attempt to kill Leslie, a mental patient who Ruvik hopes to possess. Joseph stops her. Why would he, if he knows what’s going on? Because Kidman had her own orders: she was to save Leslie if possible, kill him if necessary. Joseph, not being party to these orders, is shocked at Kidman’s ruthlessness and instinctively acts against her. Simple. Well, not simple. But given how confusing The Evil Within is, I’m trying to tie the narrative together as best I can. Did I do good?

Maybe. Let’s wait for the DLC. I hear you get to play as this dude!
Posted by Dang-Blasted at 8:28 AM