You’re playing a video game. Having an awesome time, because (unless you’re slogging through the life-ruining shithole that is WoW) why wouldn’t playing a video game be tons of fun? And then your good mood plummets, you groan and consider flinging your controller, because here comes that fucking enemy. Gamers should know exactly what I mean. In the olden times, when games were actually hard, it was the foe that you knew would probably lead to a quick Game Over screen. These days, video games as a whole are easy and bland, but there’s still that flavor of baddie that, for whatever reason, makes you gnash your teeth. Here are some types that most if not all of us can agree........suck. 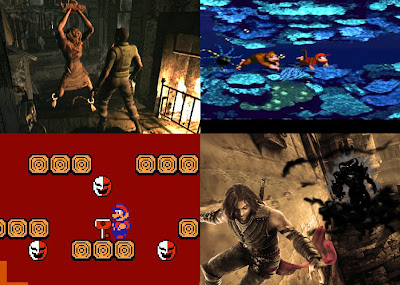 Anything That is Invincible and Chases You
Your video game character is a badass; they have big guns and health potions and they can take on any pissant foe that crawls out of the woodwork! Well...except for Croctopus. Or Phanto. Or Lisa Trevor. You know, the enemy who literally cannot be killed, and appears at certain points to force you to run like a scared toddler. Where are your BFGs now? Seriously, fuck the unkillable foe. It’s such a dick move on the game’s part. The only scenario in which it works is when it makes a horror game scarier, but even then, it can hardly be called fun to sprint around in panic mode, praying you find the spot that triggers the next cutscene before some jawless bulletproof monstrosity pours your spleen on its Cheerios. At least with some of these types, you get to kill them eventually. But “eventually” never seems to come. 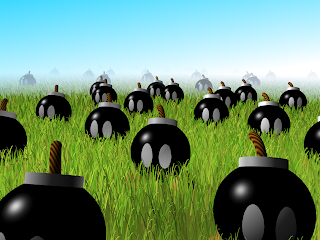 Kamikazees
In terms of anti-awesomeness, nothing beats the first time you encounter a bad guy that wants to give its wretched little life in the name of the Glorious Evil Cause. Of course it’s running at you -- bad guys always run at you. Huh, you’re shooting it but it’s not dying fast enough. Eh, so you’ll lose a chunk of health, no huge deal. And then the foe reaches you and fucking EXPLODES, its burst body-meat blending with yours in a smoothie of icky failure. Bob-ombs are the famous example, but way too many games think it’s a good idea to feature this damn thing, which you often don’t see coming or can’t deal with in time because there are other enemies around. So once again, you’re wearing your legs like a helmet and cursing the one time video game A.I. does what it’s supposed to. Weird that one of my favorite games, Killer7, features nothing but kamikazee foes. So I’m a hypocrite; this still bites. 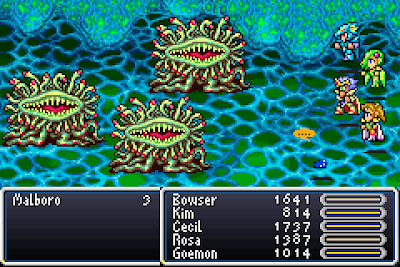 The Handicapper
You’re helpless. The fight’s going on but you are no longer in it. Why? Because the enemy turned you to stone. Or they sprayed goo everywhere and now you’re glued to the damn floor. Or they hit you with some trippy toxin that reversed the polarity of your controller, causing you to stumble off a cliff. You are now dead weight, thanks to a monster that doesn’t play fair, that eschews simply killing you in favor of crippling you so all its monster buddies can point and laugh. Status effects suck no matter what, but it’s worse when you run into a foe that you know is gonna hit you with this bullshit, and all you can do is brace yourself and say a prayer. The stupider the ailment, the worse this type of enemy is; I’m looking at you and your damn Pig spell, Final Fantasy IV. 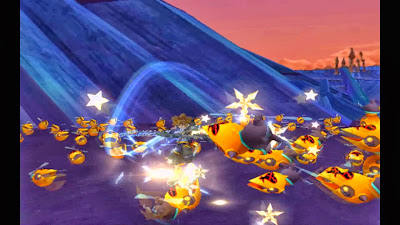 Little Swarming Fuckers
When playing a game, there’s this subconscious satisfaction you get from tackling foes that you consider your equal. Picking on someone your own size, as it were. So it seems a bit insulting when you get rushed by a horde of pint-sized critters, each of which you could squash with pathetic ease were they not backed up by a zillion identical buddies. The fuck is this, game? I have a big fancy sword and many interesting attack combos befitting a worthy adversary, so why am I pounding away at the X button, flailing about and murdering little grunts by the score, only to have more take their place? This isn’t combat, it’s Whack-a-Mole for masochists, and what could be more embarrassing than actually succumbing to sheer numbers? It’s happened to us all at some point, and even a skilled player can be taken down by the jabbering throng. Tedious doesn’t even begin. 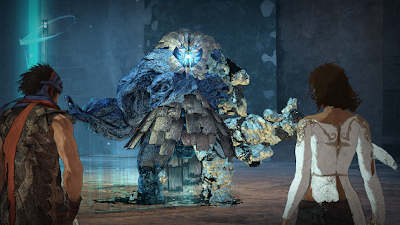 “Only [X] Can Kill Me!”
I have no problem with fighting smarter rather than harder; it can be a lot of fun to figure out an enemy’s weaknessness. What I don’t like is the type of enemy, often a boss, who can only be killed by doing something really specific, something that has jack-all to do with actually fighting the bastard. Combat? No, none of your weapons or moves will work on this guy, but you can damage him by luring him onto this dias, whacking both his kneecaps at the same time, then running across the room to hit this switch and electrocute him before he recovers. And he recovers in three seconds, so we hope you like performing the same series of steps over and over. Yeah, I like strategy, except when the result is me wasting the day trying to prompt my foe into doing the arbitrary thing that will allow me to do the other arbitrary thing that is the only thing that can hurt him. Confused?

Foes of No Reward
This applies to games where killing your foes nets you more than just a sense of victory and a possible boner. Games where there is a tangible reward for defeating something. Because a lot of the time...a whooooooole lot of the time...the reward ain’t worth the trouble. You pray for something good, a monster who’ll drop a weapon or rare item, a Pokémon who kicks ass. Then you facepalm as, for the tenth consecutive random encounter, you’re facing some pissant little thing that’s easy to kill and offers nothing more than a few minutes of blown time. You have to wade through them to get to the bigger, more interesting foes, and you do it, because the game has you by the balls. Keep fighting the low-level rodents and you might find a Legendary or an Esper or whatever. Keep dreaming. Sucker. 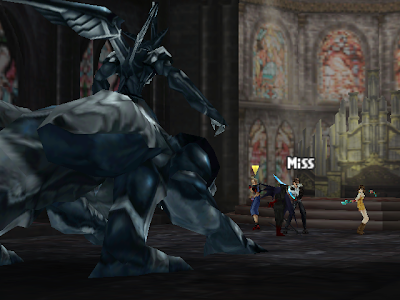 The Ultimate (Optional) Kill
And on the flip side, you have the one enemy in the game that’s so big, so powerful, so fucking near-impossible to beat, that you’re not even required to. This battleship-sized bruiser sits atop a peak somewhere, or lurks in the darkest, foulest dungeon hole, daring you to come take him on. If you try, he’s gonna pulverize you in two seconds flat unless you’ve spent days of optional gameplay time beefing yourself up, and even then, the fight’s gonna last about as long as a Netflix original series. Your finger joints will bleed. You can, of course, just ignore him. But he taunts you with his existence. “Is your completion bar at one hundred percent?” he sneers. “No? Then keep grinding, girly-man, because if you don’t kill me, YOU ARE AN INCOMPLETE EXCUSE FOR A GAMER.” This enemy’s sole purpose is to make you wretched. What a dick. 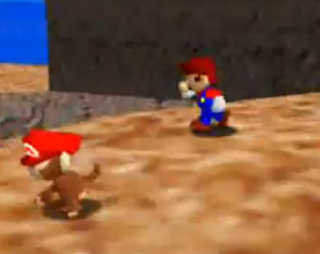 Thieving Sons of Bitches Who Steal Your Shit
Remember playing Super Mario 64 and suddenly noticing, with dawning horror, that you could see Mario’s mullet because his hat was missing? What the FUCK? Did you comb all the levels in a panic before finding it in a vulture’s claws, or gracing the noggin of that shithead monkey? Bad guys who steal your stuff are absolutely awful. Half the time, you don’t even notice at first. Even if you do, you have to get your property back somehow, and it’s far from easy. And they never seem to take minor stuff, either. It’s like, c’mon, I have five Frost Rings. You’re welcome to one of those. NO, NOT MY FUCKING BROADSWORD! COME BACK HERE, YOU LITTLE TURD OF A CUNT! And there he goes, giggling all the way. If only you could kill foes more than once, because thieves deserve worse than they get. 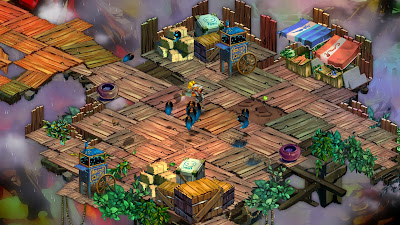 Enemy Spawners
I’ve been fooled by this thing on numerous occasions. Fighting a battle against a bunch of minor foes (often the little swarmers mentioned above) and noticing that this fight seems to be taking an awfully long time. Almost as if something were churning out an infinite number of......oh. This is why you shouldn’t just stand in one place and let enemies come to you. Sometimes, there’s a specialized foe nearby that spews smaller foes from its guts in complete denial of the laws of mass and energy. It usually has a ton of health, and its own endless spawn will rabidly defend it as you try to curb the unholy birthing stream. The battle can’t truly be won until the spawner dies. Quick protip: unless you’re a masochist or consider XP more important than fun, for God’s sake, TARGET THESE FIRST. If you can even find them. 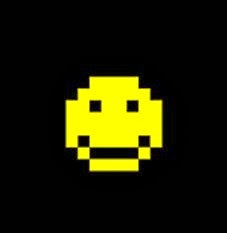 The One You Dread
The image above will be meaningless to young gamers. However, those of the first gaming generation, who were kids in the ’80s, may be suffering unwilling bowel evacuations right about now. We all have the video game bad guy who fills us with terror. Not anger or frustration. Fucking terror. You play the game knowing that it will appear, rising into view from some dark netherworld, to eat your tender gamer’s soul. It’s not that this foe looks scary (although it might...fucking Pyramid Head, amirite?), it’s that it will kill you more inevitably than Liam Neeson after you ran over his dog. It has killed you countless times, resisting your efforts to defeat or evade it, until dread of its appearance is hardwired into your brain’s nightmare factory. Like I said, it’s different for everyone. And it’s often something that hits us as kids, when we form our fears. I mean, Snacker the Shark from Banjo-Kazooie was terrifying to me once upon a time, but these days, it’d just be pathetic to get scared of a cartoon foe from a silly, colorful N64 game. Right? 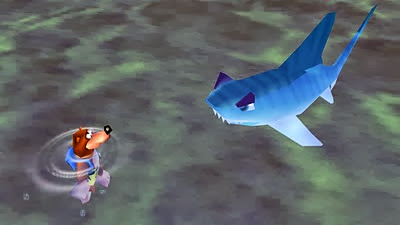 Video games. They will destroy you.
Posted by Dang-Blasted at 7:52 PM