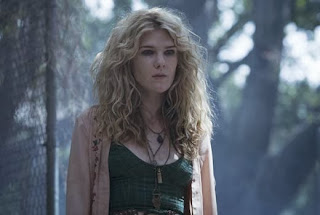 --Let’s discuss stereotypes for a moment. Lord knows American Horror Story likes discussing them, often in a manner than would make the politically-correct gape in outrage. I’m talking mainly about black people in this case. Last season touched upon mixed-race marriages, but in a very positive and forward-thinking way. Coven is going down a riskier path by portraying black people as...well...having equal potential for villainy as white people. Which is true, but you’re not supposed to admit it. I mean, look at Queenie: she worked in a fried chicken joint (racial clichés!) and dealt with an asshole customer by magically Kentucky-frying his arm, which was just a teeeeny bit excessive, yeah? And Marie Laveau -- damn, what a bitch. An awesome and kick-ass bitch, but still unafraid to do terrible, inhumane things. If this were a Hollywood film, all the black characters would be glowing saints (see: The Help). So...is it right to address stereotypes by utilizing them, rather than hiding from them? I think so. I think that blinding ourselves to racial prejudice is its own form of prejudice. But I shouldn’t be taking any of this too seriously, not when the episode opens with rednecks getting eaten by zombie crocodiles.

--What? Yeah, as we kinda expected, Misty Day is still alive and hiding out in the swamps. Just a reminder that Lily Rabe is an awesome actress who keeps knocking these roles out of the park. Her Misty is part vengeful hippie, part zealot, and all Stevie Nicks fan, and she’s also got all kinds of warning lights flashing around her. I mean, the “rules” of witchery seem to imply that wild cards like Misty are a problem, and now Zoe is torn between school and swamp, between order and chaos. She’s struggling with her womanhood, hindered by her killer sex powers, and Misty -- who, I’m pretty sure, has a raging sapphic crush on Zoe -- is gonna be the devil on her shoulder. And she may not have an angel.

--Back to the rules of witchery. Are there any? We already know most witches have one specific power or strength, but it also appears that any witch can perform a cool spell from a recipe. Who made up those recipes, anyway? I really want to know. One such spell: bringing your dead, stitched-together boyfriend back to life. The theme of empowered women continued as Madison took Zoe to the morgue where all the fratboys’ dismembered manflesh lay awaiting categorization. It was just the kind of icky hilarity this show excels at. Not sure which bits are Kyle’s? Just grab the comeliest chunks of male anatomy and assemble yourself a dream guy! It’s so wrong, and so right. The spell to revive Kyle involved your typical mix of salt and pentagrams and blood offerings, and it totally didn’t work. Good thing Misty wafted by and revived FrankenKyle herself! (Or did she?) Only FrankenKyle is, shall we say, not handling his rebirth well. Probably confused that he now has a foreskin, an outie belly button, and one Hispanic buttock. Tee hee. Misty’s taking care of him for now, but I don’t trust her one tiny bit. Hijinks!

--On the subject of stereotypes: Jamie Brewer. I really like watching her and I’m not sure why. If you somehow haven’t noticed, she has Down Syndrome, and it’s hard to discuss her acting without sounding either condescending (“Oh, she’s doing such a GOOD job!”) or overly PC (“She’s really no different from any of us!”). She faces the challenge of only being able to play characters written with a Down’s sufferer in mind, which, let’s face it, is the same challenge faced by black actors unless their name is Will Smith. Brewer’s line delivery isn’t great but she has a lot of screen presence, and her condition actually works in her favor because of her emotional acting style. Or something. Again, I believe it’s wrong to ignore her differences; I’d rather just admit that they aren’t hugely important. AHS sort of does that. In a very unsubtle way.

--More magic spellcraft was going on in the world of Cordelia, whose subplot came into focus: she can’t conceive. Her husband, Hank (Josh Hamilton), seems like a decent guy who sure is open-minded about witchcraft. Enough that he preferred a consummation rite over in vitro fertilization. Damn right he did! What’s more fun: watching while your wife gets knocked up by medical technology, or writhing around with her in a circle of fire while newborn snakes glide sensually over your sweaty bodies? Magic can be fun! But we’ll have to see if the spell worked, and/or if it will have horrible consequences. Knowing this show, probably the latter.

--How crazy is this: I felt a bit sorry for Madame LaLaurie. Yes, in spite of all that slave torturing. In the present day, Fiona grilled her for info on immortality, which led to more revelations about her fate. Marie Laveau didn’t poison LaLaurie, she gave her eternal life. Then lynched her family. Then stuck her in a coffin. In that scene, despite the context, LaLaurie was the tortured victim and Laveau’s black mob were the murderous monsters. Takes a monster to defeat a monster, it seems, and now we’ve got a three-way monster battle. Because Fiona went straight to Laveau, who OF COURSE is still alive in the present day. This led to some absolutely sublime acting from Lange and Bassett, and a further breakdown of witchcraft vs. voodoo. See, voodoo came first. As they so often do, white folk took something from black folk (and, it would seem, Native Americans) and claimed ownership. Now witchcraft is more powerful but voodoo is older and more insidious. And Laveau is not about to let some uptight white bitches push her around. And neither is her minotaur boyfriend, also still alive and still a fucking minotaur. No idea how that works. I also have no idea whose side I’m on any more.

--I predict that Fiona, Laveau and LaLaurie will plot and scheme and maybe destroy each other in the end, clearing away the misguided old ways and making room for the younger generation to bring witchcraft into the modern world. I also think Queenie (who, we learned, was descended from Tituba, the slave who introduced magic to the women of Salem) is gonna be Pyro from X-Men 2, if I may bring back that analogy. She’ll switch to Team Laveau, probably at the worst possible time. Shit will totally hit the fan. And then Misty will collect it and smear it on FrankenKyle’s suture wounds.

--No Frances Conroy this week. BOO!
Posted by Dang-Blasted at 1:04 PM