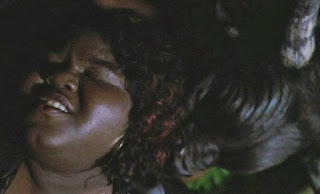 --Queenie is Marie Laveau: descended from a source of magic, unafraid to be a monster, royalty in her very name. Nan is Myrtle Snow: kooky and eccentric, powerful without seeking power. Zoe is Cordelia: peaceable and haunted by her power, yet not without a dangerous edge. And Madison is Fiona: extra-witchy, spoiled and regal, poised to take control. I see what you did there, show. Except history may not repeat itself after all, not if Fiona has anything to say about it. Holy SHIT, this fucking episode.

--I mean that in a good way. “The Replacements” was the strongest ep yet, mixing deep tragedy and horror with laugh-out-loud comedy. I literally did laugh out loud at the sight of Madame LaLaurie weeping in despair as she watched Obama on TV (“Liiiiiiieeeeeeeeeessss!!!”). Other giggles include Nan’s huge red earphones, Laveau playing Solitaire on an iPad in her voodoo lair, and pretty much everything involving the new neighbors. But the darker twists, well, they hit me in the gut, all right. You really can’t predict anything, can you.

--Yeah, it was pretty hilarious seeing LaLaurie reduced to a maid, forced to wait upon a smug Queenie hand and foot. (Fiona’s hypocrisy in calling out LaLaurie’s racism made it even more amusing.) Perversely, this led to what looked an awful lot like a budding respect between the racist slave-killer and the fat, insecure witch-in-training. Well, maybe. I think we’re going to see LaLaurie grapple with this radical new idea that black people are human beings, while Queenie starts to see the strength in herself. See, when Bastien the minotaur came sniffing around, presumably looking to murder the shit out of LaLaurie, Queenie protected the bitch by making a literal virgin sacrifice. Yep, she schtupped the minotaur. And it was frightening, messed-up, and weirdly poignant. Poor Queenie’s stuck in monster mode, but since the scene appeared to end with Bastien abducting her, I’d say she’s gonna have a forced entry into Team Voodoo. Can’t wait.

--Those new neighbors? Heh. Who’re the worst possible people to live next door to a gaggle of snarky witches? Jesus freaks, of course! Joan Ramsey (Patti LuPone) is an uptight Bible-flinger, while her son, Luke (Alexander Dreymon), is an unfairly gorgeous galoot who’s firmly under mommy’s thumb, for now. You can imagine how stellar their first impressions of the coven were; flaming drapes ensued. I can’t tell if the Ramsey subplot will lead to comedic hijinks or dark bloodshed, but I like how the show’s mocking the stereotypes of hardcore religiosity (note how quick Joan was to threaten legal action) while also pointing out that people tend to be assholes to the devout, just because. Once again, no real good guys. Except Nan, who I think may wind up getting snuggly with Luke. Which would be epic.

--And that’s about the end of the funny stuff. Cordelia’s sinking into pathos as she learns she cannot, in any way, have children. And the spell didn’t take. So she went to Laveau, who toyed with her, describing the voodoo fertility rite (which we saw, of course, in lurid and glorious detail. Only AHS would feature a bubbling jar of jizz) before whipping the rug out from under Cordelia and telling her to fuck off. Okay, Cordelia really needs to kick some ass soon. Also, they need to make an entire video of instructional sex-themed magic spells, starring Sarah Paulson and her “weirded out” face.

--The Zoe/Kyle business this week....Jesus, did that hurt. Poor Zoe, always wanting to do the right thing, went to Kyle’s mother, Alicia (Mare Winningham), who appeared to be a suicidal pothead who just wanted her baby back. So Zoe retrieved FrankenKyle from the swamp (leaving the attention-starved Misty bereft) and dumped him on his doorstep. Alicia was as shocked and delighted as you could expect, but Kyle wasn’t, because -- in one of the most shocking, did-not-see-that-coming twists this show has ever pulled -- we discovered that Alicia sexually molests her son. A lot. And Kyle, reduced to pure id by his death and rebirth, snapped and beat Alicia’s face in with a trophy. And Zoe doesn’t know. All she saw at the end was a monster who’d murdered his own mother. I am chilled by the places this subplot is going, and riveted by not knowing what’s next.

--The other riveting thing, of course, being Fiona. She’s dying. Sinking deeper into a haze of booze and drugs. She has cancer, it turns out; no youthening procedure, magical or otherwise, can save her. A new Supreme must be chosen, but who’s ready for it? Fiona looked at Madison -- powerful, proud, spiteful -- and saw herself. Which terrified her. Because, as a flashback revealed, young Fiona murdered her own Supreme (Christine Ebersole, who I’m sure we’ll see more of), ascending too early. No one knew, except a character I haven’t even mentioned yet, Spalding the butler (Denis O’Hare, is that you?), who Fiona apparently silenced by cutting out his tongue. And thus it is implied that everything wrong, all that deterioration of modern-day witchcraft, is all Fiona’s fault. She took power that she didn’t deserve, and wasted it on her own desires. And she believes the new Supreme-to-be, Madison, is literally leeching away her power, killing her faster. Is that true, or is Fiona just paranoid? And how much of that bloody final scene was calculated on Fiona’s part? Apparently sinking into despair, she asked Madison to kill her. Madison refused. And in the drunken struggle, Fiona cut Madison’s throat. Once again, Spalding was the sole witness to the terrible cycle, and Fiona, in control again, ordered him to bury Madison and change the damn carpet. So, again, how much is Fiona’s genuine emotion and how much is her being....evil?

--So that’s where we stand; the coven has seemingly lost two members, one to death and one to the other side. Half the witches are struggling to find their path and the other half are terrified that they’ve reached the end of the road. There’s no guarantee Madison will stay dead. Or how long LaLaurie will put up with being belittled. Kyle is getting worse, not better, and Misty is a time bomb waiting to explode. My heart’s still thumping from the episode. As is always the case with this show, things can only get worse. And that makes it better.

--Oh, hey, will someone tell the camera guy to stop turning the camera sideways like he’s a fucking gangbanger with a 9MM? It’s not that hip.
Posted by Dang-Blasted at 12:13 PM