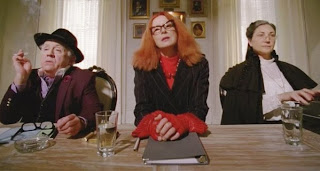 --So it’s Halloween, which means AHS is pulling their usual two-part holy-shit-stravaganza. Zombies! Snakes! Creepy dolls! Random murders! And cliffhangers galore! We’ll get to those. This ep, for a large part, dealt with the fallout from Madison’s accidental (?) death. When Fiona ordered Spalding to dispose of the starlet’s body, she perhaps didn’t take into account that Spalding has a very colorful private life. One which involves dressing in nighties and holding pretty pretty tea parties with all his little doll friends. Ooooooookay. I honestly feel like this might be something stuck into the show just for the sake of schlock, but whatevs. Spalding decided Madison’s corpse was his new best tea party friend and now has her all dolled up in a chair. She’s gonna get ripe pretty quickly. And worse...

--The Council has arrived. I guess it’s the closest thing witchcraft has to a governing body: three (or more?) powerful witches who aren’t quite on the level of the Supreme, but exist to lay down the law...on the Supreme too, if need be. The current Council is headed by Myrtle Snow, in all her fabric-swathed, ditzy glory (Frances Conroy Frances Conroy Frances Conroy), and also includes a Mary Poppins-type and a cute little gay dude. Interesting to note that both the past and present Councils included a man. Are male witches a thing? Does the Council always need one? Are they making up the rules as they go along? Anyway, we got one of those scenes where somebody (Cordelia, in this case) blurts a lot of incriminating evidence in a comical manner, and then we learned that Fiona and Myrtle haaaaaaaate each other. Which is just another excuse to put brilliant actresses together and let the sparks fly.

--Back to men being monsters. FrankenKyle has flown the coop, narrowly avoiding  Zoe’s badass attempt to kill him with rat poison, and since it’s Halloween, a bloody, shambling young man isn’t gonna attract as much attention as usual. Fiona dealt with Bastien the minotaur (who didn’t abduct Queenie after all, just badly wounded her) and sent his head to Laveau in a cardboard box. Godfather reference or Se7en reference? Take your pick. I noted that Bastien’s severed head still looked alive, so maybe Laveau just needs a new hunky body for him, but what matters is that the big truce between witches and voodoo-ites, made back in the ’70s between Laveau and Anna-Lee the Supreme, is broken. And the last male monster? Sigh. Guess it was too much to hope for Cordelia’s husband Hank to be a decent bloke. Not only is he canoodling, he’s canoodling with Alexandra Breckenridge, who bit off a man’s penis in Season One of this show, so you know things can’t go well. After fooling us by allowing her to develop her character a bit, Hank, for absolutely no known reason, shot Alexandra in the head. So...I guess that’s a new subplot. But why? And do we care?

--Not much of LaLaurie this week, but we did see her struggle with the task of thanking Queenie for saving her life. Man, it’s looking like LaLaurie might have the redemptive character arc this season, though it takes a lot of redemption to make up for, I dunno, slicing a person’s face off while they’re still alive. Just saying.

--In the land of flashbacks, we got a whole lot of history on Fiona and Myrtle, intercut with the present-day Council hearing. They were fellow witches-in-training, see, and Myrtle was the one who sensed Fiona had murdered Anna-Lee. We were initially led to believe that, yes, Fiona cut out Spalding’s tongue to keep him from talking after Myrtle enchanted him so he couldn’t lie. As it turned out, Spalding severed his own tongue after proclaiming his love to Fiona. Awesome, except that he dresses in nighties and has tea parties with dolls and corpses, so Fiona was probably wise to ignore his advances. In the present day, Spalding still refused to finger Fiona, leading to an awesome/pitiful meltdown on Myrtle’s part. Even better, Cordelia stepped up to defend Fiona, revealing that Madison had a heart murmur that negated her being Supreme (OH SHIT, Fiona), and leading to legit familial bonding. Awwwwww! Only Sarah Paulson never has anything good happen to her on this show, so Cliffhanger #1 occurred when a black-clad figure approached Cordelia in the bar bathroom and flung a painful liquid in her face. Team Voodoo is a likely culprit, but my theory is that Myrtle did it in revenge, and she’s gonna be one of the villains this season.

--Two cliffhangers? Why not? Marie Laveau is all kinds of pissed, and -- as the opening flashback to 1961 showed -- her favorite method of retaliation is to summon up some honest-to-god zombies and sic them on her enemies (racist child-killers, in that case). Ugh...I am so, so sick of zombies. So sick. HOWEVER, if anybody can make them rock, it’s these showrunners. As Halloween night wore on, the coven got a visit from three familiar faces: Madame LaLaurie’s desiccated zombie daughters. And they are only the first of a very large undead posse bearing down on Miss R’s. Trapped within are Zoe, Nan, Queenie, LaLaurie, Spalding, Madison’s corpse, and poor Luke Ramsey, who is probably going to try and beat the zombies by quoting Scripture at them. So get ready for American Horror Story’s inevitable tribute to zombie movies next week, along with Cordelia possibly turning into Two-Face. Yay!