Having freer and cheaper access to games (via Steam and the Humble Indie Bundle) has proven to be a mixed blessing. On the one hand, I played a ton of games this year. On the other hand, since I’m not a hardcore gamer, it became harder for games to hold my attention. There were many I didn’t finish, or even play for very long. Oh, but there were a few that grabbed me, that I played right through with delight, fully engaged. And here they are.

(Since I definitely had distinct favorites this year, I’m doing this list in countdown form, rather than alphabetically as in the past.) 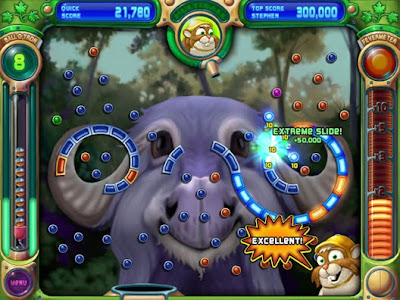 7. Peggle (PC/Mac)
If playing a video game is like eating dessert, a game like Peggle is akin to chugging an entire bottle of high fructose corn syrup. That said, it’s ridiculously fun and addictive. PopCap is one of the titans of the casual arcade genre, and this garish Pachinko-like franchise has ensnared plenty of middle-aged soccer moms, cubicle drones, grandparents, and other folks who scoff at real games. Can you hit every orange peg before you run out of balls? Is there actual skill involved, or is it just chaos screaming in the void? Although I prefer games with real stories, it’s always nice to have something you can pick up and kill time with whenever. It’s also worth pointing out that Peggle deviously imbues the player with an overblown sense of achievement, awarding points in six-figure sums and blasting you with stars, rainbows and Beethoven’s Ninth when you clear a round. Who cares that you got fired and your leg fell off? YOU WIN!!!!!!!!! Shallow it may be, but I can never quite get enough of Peggle and its sequel, Peggle Nights. It’s too late for me. Save yourself. 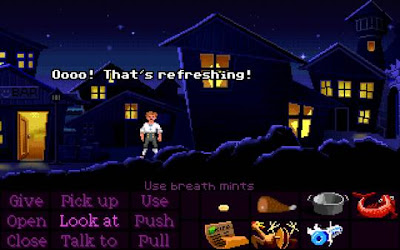 6. The Secret of Monkey Island (PC/Mac)
“My name is Guybrush Threepwood and I want to be a pirate!” If you’re not laughing yet, you will be. YOU WILL BE. Back when LucasArts wasn’t a piece of shit company, Monkey Island was its pointable, clickable crown jewel. This is one of the funniest games ever made in the entire world, blindsiding you with gags as you guide the fresh-faced young hero on his quest to become a pirate captain. I’m faced with the problem that I want to talk about the brilliant humor but I also don’t want to spoil any jokes, for the benefit of unfortunate souls who haven’t played this yet. I was one of those souls until recently; thank Christ we live in the age of downloading. I’m glad the Special Edition includes the original as well as the updated graphics; there’s just something funnier about those old-school giant pixels and unsubtle color palette. Either way, you will laugh long and hard. Oh, and it’s also a really well put-together adventure game, too. Basically, nothing to complain about. Except the fact that there’s no Mac port of Monkey Island 2: LeChuck’s Revenge. AAARGHFUCK. 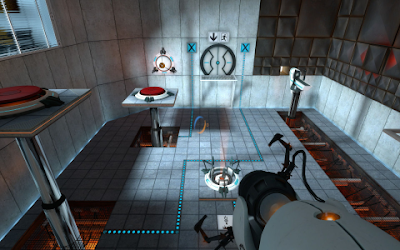 5. Portal (Multi-Platform)
I hate bandwagons. Jump on a bandwagon and you’re doomed to join the ranks of the honking fanboys, too self-satisfied to realize how annoying and unfunny you are to the outside world. So, yeah, I didn’t get around to Portal until 2011. And I’m glad. Going into it knowing what its worst gags are, knowing that I hated the Cake/Lie bullshit and that overrated song at the end, I was able to enjoy it for the subtle little masterpiece of humor and design that it really is. Not too much to say; you probably know why everyone likes Portal so much. Great conception, tight as a drum, jokes that (apart from the Cake/Lie bullshit) get funnier over time, and a perfect example of how to do a lot with a shoestring budget. I wish more mainstream game designers had the breathing room to take chances and think outside the (orange) box. We’d get more Portals that way. And we also need more villains like GlaDOS, the sweetly psychotic robot overmind whose every line drips with snarky, passive-aggressive grandeur. Now, has the brouhaha over Portal 2 ended yet? Is it safe to come out from under my rock and play it? 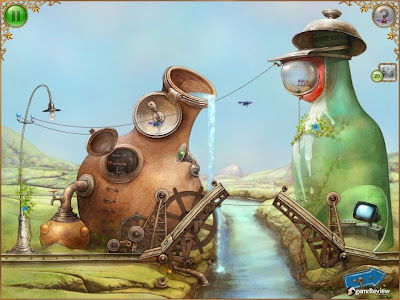 4. The Tiny Bang Story (PC/Mac)
I wouldn’t be surprised if you’ve not heard of this one. It’s on Steam, I happened to notice it, and it promptly won my pwecious widdle heart. Sarcasm aside, this is how to do a kid-friendly puzzle/hidden object game correctly! Set on a tiny little planet that needs saving, the game takes you through a dreamy, whimsical, and utterly charming odyssey. It’s very short and not that hard, but I found it an absolute joy to play. Maybe it was the watercolory graphics, or the great music, or the abstract storyline that hints at things but leaves you to fill in the blanks. No bad guys, nothing to kill or destroy, just puzzles and secrets and exploration. I admit it’s not that substantial and certainly not for “serious” gamers, but something about it appealed to me on all levels. It means you no harm and invites rather than insists. It’s just challenging enough to not be condescending. If you have a smart child aged 6-10 who likes computer games, get them The Tiny Bang Story and play it with them. Trust me. I’ve already replayed it twice in this year alone. 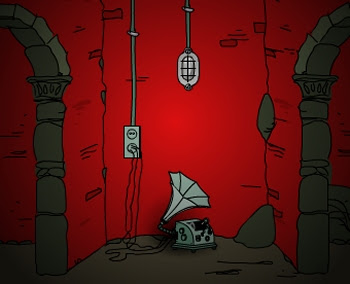 3. Submachine (Free Online)
What a wondrously strange and haunting realm Mateusz Skutnik has dreamed up. This Polish artist/architect has created many cool flash games, but his crowning achievement is the Submachine series. Starting out simple, this point-and-click puzzler grows absolutely vast in scope, as you find yourself exploring the titular Submachine -- a dusty, ramshackle pocket universe where the ruined scraps of human history seem to have aggregated. I love ambiguous narratives and this one is a scattered mosaic, impossible to fully piece together...but it’s so much fun to try. The graphics and music are minimalist and spooky; a sense of loss hangs over this lonely realm. In the vast, echoey Submachine, are you the only living, breathing creature left? Each entry in the series is stranger and more expansive, and although it’s cousin to such titles as Myst and Machinarium, there is truly nothing quite like it. I was riveted. And any old prunes still sniping that video games can’t be art, can shut right the hell up.
http://www.pastelportal.com/stories/the-submachines/ 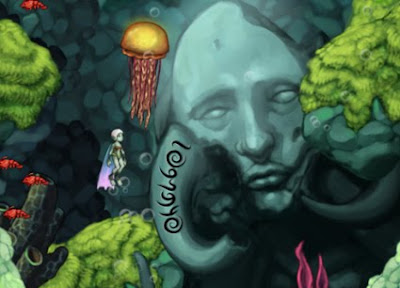 2. Aquaria (PC/Mac)
Man, oh man, this game is good. SO GOOD. It may be a little indie title, but of all the games I played this year (Spore included), Aquaria is the one that felt the hugest. It’s about an amnesiac fishlady named Naija who must explore an underwater world, trying to figure out who she is and why the ocean seems to have been infected by an evil presence. It ain’t perfect; the graphics are lovely but quite two-dimensional, and the characters are bland. But the sheer playability! I can’t imagine why it took so long to make a MetroidVania game in a weightless, underwater location (Ecco the Dolphin doesn’t fucking count). Each environment Naija visits cries out for intense exploration; the world map is bloody gigantic, and there are countless dozens of colorful sea critters to fight, eat, ride, or just hang out with. The music is dynamite. The controls are sleek. There’s a RPG-inspired “cooking” system for creating custom power-ups and it works really well. There are epic bosses, secret areas and items to hunt down, badass special powers...and on and on. Aquaria blew me away; it made me want to be a game designer so I could make things like it. I played it way back at the start of the year, and for the longest time, I was pretty sure I wouldn’t play anything I liked more in 2011. What knocked this fun and wholly absorbing aquatic magnum opus from the top spot?

1. Killer7 (PS2)
Awwwwwwwww, yeah. Thank you, weird-ass Japan. I’d never been sure if I wanted to play this; rail shooters ain’t my style. But I finally caved in. And my mind got blown, inverted, Möbius-stripped, and then blown in the pornographic sense. You may know that this is a bizarre, category-defying title from batshit developer Suda 51. If you have not played it, I’m afraid no description will do it justice, and if you have played it, I shouldn’t have to explain anything. You play as a group of assassins who share the same physical body; the setting is some sort of trippy, Orwellian future; the bad guys are a group of giggling, dragon-skinned cultists who like to explode in your face; and the bosses include an afro-sporting Texan evangelist, a murderous albino in purple sequins, and the Power Rangers. The game plays like a fucked-up shooting gallery, as you switch between your band of killers to solve puzzles and take advantage of their unlimited weaponry. You’re also haunted by the snarky ghosts of your past victims, and take advice from a dangling freak in a bondage suit. Get the picture? There is nothing, absolutely NOTHING, like Killer7. Some may hate it. I adored it to an unseemly degree. So many games are faithful carbon copies of each other; Killer7 is a gigantic “fuck you” to all tradition and convention, interested only in being itself. If you appreciate video games, I beg you to play this. See how far the concept of a video game can be pushed.
Posted by Dang-Blasted at 8:16 AM