I don’t often hit upon really good fan theories. When I do, it’s best to scribble them down before they dissolve into a puddle of mental stroganoff.

Zootopia was great. I loved it. Definitely my favorite Disney animated feature in quite some time. It was funny, smart, driven by characters and dialogue rather than farts and slang, and had some surprisingly pointed stuff to say about our own society. You can unpack this colorful romp about talking animals, deconstruct its themes of social equality and prejudice, argue whether or not it succeeds in having a coherent message. (For a film decrying racism, it sure does lean heavily on obvious animal-based stereotypes.) I’m not really gonna do that here, because I had a whimsical notion that led me to formulate a theory, not only about Zootopia, but about a ton of other Disney movies. 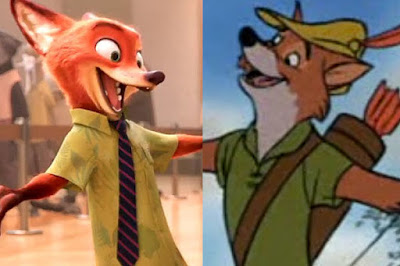 My whimsical notion was this: Nick Wilde, the jaded, charismatic fox who serves as Zootopia’s secondary hero, is the descendant of Robin Hood -- the jaded, charismatic fox who starred in Disney’s 1973 adaptation. They’re both lawless knaves with their hearts in the right place. They even look very similar, which I’m positive was deliberate. Once I realized that Robin begat Nick, my brain formed the next logical conclusion: Robin Hood and Zootopia take place in the same universe, at different historic periods. A world devoid of humans, where animals function as fully sentient beings with their own society. And then I began wondering if the same could be said of other Disney movies too. A ton of them involve talking animals. But many have humans too, so that doesn’t work. Or DOES it...?

I believe it works, and I’ll explain why. My theory encompasses all Disney animated films that involve talking animals but not magic or fantasy elements. So, for instance, Cinderella may feature those cute mice, but it’s also got magic, so it’s off the table. Science fiction is also not allowed (piss off, Chicken Little). Films that mix live action and animation don’t count (goodbye, Song of the South...you awkwardly racist little thing, you). I’m gonna ignore TV cartoons, and I’m excluding Pixar, which already has its own awesome fan theory. This leaves all the films that ostensibly take place in the “real world.” These films, in chronological order, are...deep breath...Dumbo, Bambi, Lady and the Tramp, 101 Dalmatians, The Jungle Book, The Aristocats, Robin Hood, The Rescuers, The Fox and the Hound, The Great Mouse Detective, Oliver and Company, The Rescuers Down Under, The Lion King, Tarzan, Dinosaur, Home on the Range, and Zootopia. Crappy-ass sequels also count, if you really care. 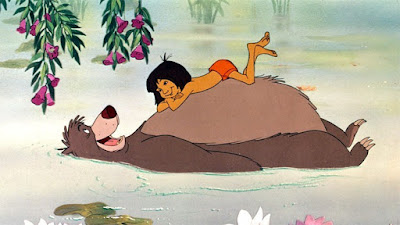 Put together, these films show us a kind of alternate universe -- let’s simply call it the Talking Animal Universe, or TAU. For whatever reason, animals are sentient here. They coexist with humans, sometimes peacefully, sometimes not. Communication between humans and animals is rare; they might not be speaking the same language. Wild animals generally consider humans to be dangerous and frightening (see: Bambi), while domesticated animals are content to serve humans as pets in return for security, food, etc. Children, as is often the case, are better at communicating than adults, as seen with Mowgli from The Jungle Book and the imperiled kids from the Rescuers movies. Hell, Tarzan is raised by apes from infancy. However, to most adults, animals are just...animals. For better or for worse. Keep them and love them, hunt them and eat them. Whatever. Humans may willfully blind themselves to animals’ sentiency, because acknowledging they can think and feel would force us to face how we’ve treated them.

DISCLAIMER: I am not an animal rights activist. I eat meat. I approve of zoos. I don’t like seeing chimps in science labs but I’m okay with mice being used to cure cancer. I hate the fur industry and I also think PETA is evil and disgusting. It’s called being moderate. Moving on!

From the list above, I want to single out four movies in particular: Dinosaur, The Lion King, Robin Hood, and Zootopia. I put them in that particular order on purpose. What distinguishes them from the others? They are the only films on the list with absolutely no human presence. Dinosaur, that CGI romp from Disney’s experimental phase, is (apparently) set long before mankind. The Lion King seems to exist far from human influence. Robin Hood and Zootopia are supposed to take place in a made-up world where humans never happened. That’s if you take these films at face value. But I believe they’re part of the TAU, and they reveal what ultimately happened to the human race.

So. At some point in our alt-verse, humans realize and/or admit that animals are sentient. Our awakening probably springs from advances in technology and social awareness. As the TAU enters the new millennium, as we stop treating animals cruelly by nature, as political correctness rears its head, we see: our pets can think like us and speak their own language. The wild animals we hunt have minds and souls. What do we, the human race, do with this knowledge? How can we atone for centuries of killing and exploiting sentient creatures? And, from a scientific standpoint, we’re curious. How did animals evolve sentiency, and what might they have accomplished if humans hadn’t been there, blocking the way? 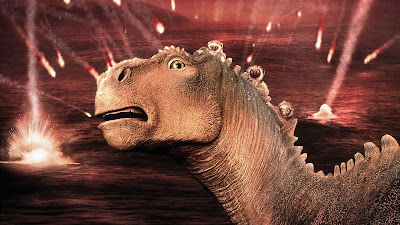 We create a massive experiment that also serves as an apology. We designate a small continent, clear it of all human life, allow it to return to nature. Working together with the animals, we seed this mini-Pangea with life. We rewind all the way back to the first complex beasts, the first vertebrates. We accelerate their evolution so we can watch them develop. Having created this human-free paradise, we sit back to see what happens. The result? Dinosaur. The beginnings of a world where sentient animals evolve without humans and don’t even know humans exist, because we, on the outside, keep them in a bubble. Then, at some point, we destroy ourselves. Human society crumbles. It goes up in flames. Dinosaur shows this: its inciting incident occurs when fire rains from the sky, forcing Aladar and his lemur family to find a new home. Meteors? No. Human satellites, crashing down from space, signaling the Big Death for our species.

(Note: I said I wasn’t going to allow films that mixed live action and animation. But since Dinosaur uses live action as a scenic backdrop only, I give it a pass.)

With humans gone from the TAU, the animals on that isolated continent can go on peacefully evolving with no idea that humans ever existed. Next stop: The Lion King, in which we see the beginnings of true society. Predators still hunt and eat prey, but they rationalize it. All part of the Circle of Life, Simba. I’ll use my anthropology degree here and mention that primitive cultures generally begin with Animism (the belief that everything is alive) before progressing to organized religion. From its early stages, this animal civilization keeps right on evolving. Predators figure out that they don’t need to eat prey at all. How can this be? Well, perhaps humans altered predator DNA to allow them to subsist on some other food source. It just took them awhile to realize this on their own. By the time we reach Robin Hood, animals have learned to walk upright, wear clothes, build towns and castles. Just as humans did. Their evolution mirrors ours. Finally, Zootopia, an ultra-modern culture where animals use smartphones and live in harmony with only the occasional racial hiccup. Our experiment succeeded beautifully; we’re just too extinct to appreciate it.

One big issue is that Zootopia only contains mammals. What about the sentient reptiles, birds, saurians, and even insects we saw in all the other movies?  I can imagine some explanations. Sentient bugs might never have been introduced to the experiment. The saurians would have evolved into birds and/or reptiles, and then...perhaps disease killed everything but the mammals. Perhaps Robin Hood took place right before some horrible Black Plague scenario. Alas for Lady Kluck! Or maybe all the birds moved elsewhere in the world and that explains DuckTales. Did I just blow your mind? 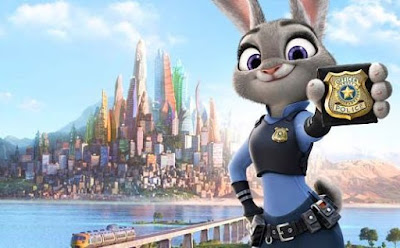 You gotta admit, it all works pretty well. Zootopia glosses over what the predators eat, so why not imagine they were genetically altered by long-dead human scientists. Also, we never see a hyena in Zootopia, and I imagine that after being so thoroughly shat upon in The Lion King, the hyenas would want nothing more to do with anybody, ever. But why does Zootopia include foxes, lions, koalas, otters, camels, moose, jaguars, snow leopards, polar bears, gazelles -- a mishmash of species from all over the world? Because we, the humans, planted the DNA for all those species to develop together on a single landmass. They lived in their preferred temperate zones until all of it, from desert to tundra, smashed together into one metropolis.

And that is my theory. It links Disney’s talking-animal films together and demonstrates how, in a sense, they all culminated in Zootopia. The beasts inherited the earth, and good for them! I can’t wait till Zootopia 2 comes along and we can perhaps gain more insight on whether or not Nick and Judy have romantic feelings for each other, and what sort of weird DNA-based shenanigans could lead to sexytimes between a fox and a rabbit. Y’know?
Posted by Dang-Blasted at 5:24 PM