A Dang-Blasted Theory: The Thing 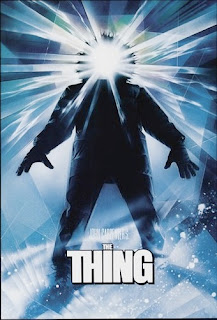 A Dang-Blasted Theory: The Thing

I just re-watched John Carpenter’s 1982 horror film, The Thing -- partly in honor of Halloween and partly to gear myself up for the prequel. Yeah, I’ve heard from pretty much every source that the prequel is lousy. Still gonna see it, mostly because I’m curious to see how well it synchs with the Carpenter film. Also, everything with Adewale Akinnouye-Agbaje in it is worth my time. But I’m not here to talk about my man-crushes.

I love Carpenter’s Thing. It’s creepy, bleak, icky, unsettling, dreadful (as in, “full of dread”), and all-around one of the most effective horror movies I’ve ever encountered. Rewatching it with full knowledge of what happens, I was able to focus on other details, and to further admire the way in which the film keeps us guessing, right up until the end. Who is human, and who is a monstrous alien in disguise? After the viewing was done, I found myself entertaining a wicked little theory, one which blossomed in my mind, one that I will now share with you: that the hero of the film, steadfast chopper pilot R.J. MacReady (played by Kurt Russel) is, in fact, a Thing for most of the film. I’m sure others have written stuff about this theory, but here’s my take.

What got me thinking was an odd sequence partway through, after the men in the Antarctic station become aware that the Thing exists, and it could be one of them. One man, Fuchs (Joel Polis), follows a shadowy figure out into the snow and finds some torn-up clothing, including a jacket with MacReady’s name on it. It’s already been established that the Thing ruins clothing as it transforms. Fuchs then abruptly dies offscreen; the others find his charred corpse. Accident, suicide, or murder? We never learn. MacReady notices a light on in his private lookout shack, and takes Nauls the cook (T.K. Carter) to investigate. When they don’t come back, the others begin to barricade the doors. Nauls reappears in a fright, explaining that he found MacReady’s torn clothing in the furnace and left MacReady behind in the storm, believing him to be a Thing. MacReady then breaks into the station and regains control of the situation. A later blood test reveals that he is human.

That sequence seemed so odd to me...as, I think, it was intended to. Why is Fuchs killed off so suddenly and inexplicably? Who turned on the light in MacReady’s shack, and what exactly happened between MacReady and Nauls when they were in there alone? This strange series of events is obviously intended to make us think MacReady might be a Thing. So, could he be? I think it is not improbable. Let’s break down the theory.

When was he infected?

I think it makes the most sense to assume MacReady became a Thing early on. The most likely culprit for infecting him is the dog-Thing that escapes from the ruined Norwegian station. It had enough chances to get at MacReady. We see that he spends time alone in his shack. Also, the dog handler, Clark (Richard Masur), is suspected of being a Thing by the others -- but after Clark dies, a blood test reveals he was human. Why didn’t the dog get Clark, such a close and easy target? Maybe because it had already done its work of infecting other men. In addition, Fuchs explains that a small particle of the Thing is enough to infect a victim. Like, say...dog hair? There are plenty of opportunities for MacReady to pick up the infection.

Why does he keep acting human?

One problem with the MacReady-as-Thing theory is that we see him act consistently human, even when he is alone. He also chats with Blair (Wilford Brimley), who we learn later was a Thing the whole time. Why would they talk as humans if they were both Things? Here’s my explanation: the Thing is cunning, so cunning and cautious that it plays its part perfectly. It’s made clear that the Thing would rather keep its disguise and avoid confrontation. Perhaps the MacReady-Thing is determined to play human even when it seems to be alone, just so it is sure of keeping its cover. In fact, it plays its part so well that it attacks and fights other Things, sacrificing them to make itself look more convincing. Even at the end, when MacReady blows up the monstrous Blair-Thing, he’s still playing the part on the slight chance that Childs, Nauls, or Garry (who is dead by then, but he doesn’t know that) might be watching. Likewise, Blair continues to act human for as long as he can; he and MacReady don’t dare converse as Things, because there are real humans nearby who might overhear. 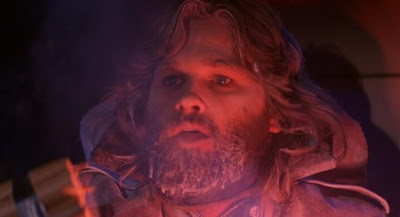 Do the Things know who the other Things are?

Possibly. Judging by what happens, I suspect that the Things are self-sacrificing. Since they’re all really part of a single, collective entity, they are willing to eliminate themselves if it helps achieve their ultimate goal: to kill or infest all the humans, and to be picked up and transported to civilization. They’re playing a deadly game, and some pawns have to be sacrificed. They’re willing to die if it helps the Thing win overall. And they’re all helping MacReady by continuing to draw suspicion away from him. That suggests they know each other, perhaps by scent or an empathic link. Alternatively, perhaps the Things do not know each other -- in which case, they don’t dare try to find out who else is a Thing, in case they guess wrong and blow their cover. Both theories work.

Nauls finds someone’s torn clothes in the kitchen, which leads the men to realize that the Thing rips through clothing when it assimilates and mimics humans. MacReady seems particularly interested in the torn clothing, and looks at it with worry. Because he’s wondering who is infected? No, because he is infected, and frets that someone will find his own torn clothes. He tries to burn the evidence, but is interrupted by Fuchs, who glimpses him and follows him out. Since Fuchs is found burned to death, my guess is that he committed suicide rather than let MacReady devour him. I should mention that MacReady’s later explanation for his torn clothing -- that someone else must have borrowed his jacket -- is really, really lame.

Here’s the biggest hole in the MacReady-as-Thing theory. During the blood test sequence, MacReady determines that everyone present is human except Palmer (David Clennon). That includes MacReady himself; we see him test his own blood. In order for our theory to work, MacReady would have had to swap his blood for someone else’s, without anyone seeing. Impossible? Maybe not. We never see MacReady bleed into a petri dish onscreen. And when he was collecting blood, everyone else was bound except for Windows (Thomas G. Waites), who’s a bit of a flake. Maybe MacReady had collected some human blood when Dr. Copper’s samples were sabotaged earlier (there was blood all over the floor; he could have scooped some up), and carefully slipped it into the dish instead of his own. Unlikely but not beyond him, especially as he’s such a resourceful chap. 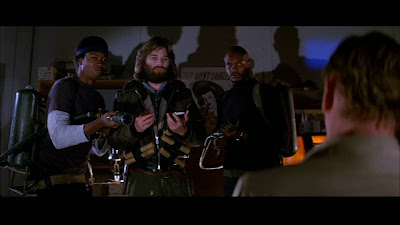 So, why didn’t MacReady burn his torn clothes after killing Fuchs? Maybe because he had a bigger plan...a plan involving an accomplice. Here’s a crazy notion: MacReady infected Nauls when they were alone in the shack, and Nauls is also a Thing. Think about it: Nauls comes stumbling in, babbling about the torn clothes and how MacReady might be infected. Suddenly, all suspicion is on MacReady, and no one thinks Nauls might be lying. Maybe MacReady and Nauls, both Things, are working together. Remember, as long as one of the Things succeeds, they all do. It could have been Nauls who sabotaged the blood samples, while the others were locking Blair up. This would mean that MacReady would also have had to fake Nauls’ blood sample -- but if he could fake one, why not two, especially during the chaos when Palmer is revealed as a Thing. Another blow against Nauls: during the climax, he goes off to investigate weird noises and is never seen again. The real reason for this is that his death was written and possibly filmed, but Carpenter didn’t like the result. But if we just take the movie at face value, we never see Nauls die. Maybe he actually merged with the Blair-Thing, or maybe he found a quiet little nook to freeze himself and hibernate until more humans found him...

I just thought of something while I was writing this. What if Windows was a Thing? What if the dog got him early on as well? During the blood test sequence, MacReady and Windows are the only two men not restrained. They could have conspired together to fake their tests. We see Windows cut his finger and bleed into a dish while MacReady watches; they could have made sure the other men saw it happen, then switched the blood quickly. Of course, shortly after, Palmer is revealed as a Thing and then brutally attacks Windows. But maybe it’s all for show. Windows fails to torch Palmer with his flamethrower; he seems to be frozen in fear. Or maybe he’s letting Palmer attack him so he will look innocent. Sadly for them, MacReady is forced to burn them both. But, again, self-sacrifice. Everything is part of the ongoing scheme to draw suspicion away from MacReady, to make him look like the Thing-killing hero -- until he is totally sure all the others are either dead or infected.

One of the great things about The Thing is its utterly downbeat ending. The station has been destroyed, and only MacReady and Childs (Keith David) are left. Neither of them can be sure the other one is human -- and so they sit, slowly freezing to death. End of movie. Okay, assume MacReady is a Thing. Why doesn’t he just reveal himself? Because he is weakened by cold and injury, and Childs, who is in better shape, has a gun. If Childs is human, he can probably overpower MacReady. And I think Childs is human at the end. See, the Thing can’t mimic inorganic matter (the 2011 prequel makes much of this fact), and Childs has an earring. It’s still in his ear at the end. Now, that doesn’t prove anything -- Childs could have been infected much earlier and re-pierced his ear -- but even if he is a Thing too, he’s also afraid to reveal himself, just in case MacReady is human and can overpower him. Assuming one or both of the men are Things, he/they realize that the best course of action is to just let themselves freeze, hibernate, and wait for the rescue team. In which case...the human race is pretty much fucked.

So, there you have it. I had fun working through this theory, and it adds some interesting stuff to the film if you watch it assuming that our “hero” is really the Thing. I’m not sure if I actually believe this theory; I think I’d prefer to think that both MacReady and Childs are human at the end, just because it’s slightly less bleak. However, one of the pleasures of a movie like this is being able to turn it this way and that, examine various pieces of evidence, and hypothesize away. Are we sure we know what we know? I dunno. And that’s why I get creeped out every time I see The Thing.