Escaping From Rooms and Eating Hamburgers

Lately, I’ve been playing quite a few Room Escape games. In fact, I’d go so far as to say they’ve become a minor addiction. This has happened to me before, and I’m confident that eventually, I’ll turn to some other enjoyable time-waster. But for now, I wanna write about the Room Escapes I’ve found online. First of all, I was led to many of them by this fine list:

If you don’t know, “Room Escape” is a subgenre of the point-and-click puzzle/adventure/hidden object type of game. As the name implies, the goal is usually to escape from a room, or some other confining space. You do this by exploring and searching said room, picking up useful items, and solving puzzles. Basic as you get. I’ve found that playing a Room Escape is like eating a hamburger: you know just what you’re in for and some things never change (there’s always a screwdriver, and usually a couch with something hidden underneath it), but you never really get sick of it. And, just like with hamburgers, Room Escapes have many levels of quality. I’d like to share some of the more memorable Room Escapes I’ve played recently, and I’m going to continue with the tortured hamburger analogy all the way! Wheeeeee! 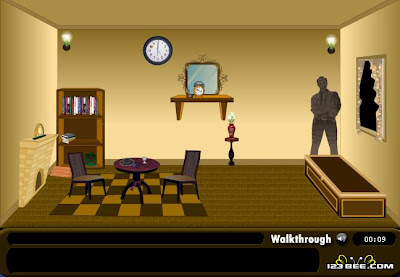 For anyone who wants a very quick Room Escape fix, for the office drone looking for something to do during his coffee break, I’d recommend the quick-and-dirty series churned out by 123Bee. These people clearly have way too much free time on their hands, because they have made nearly 300 Room Escapes. Their style is bright and colorful, and utterly repetitive; you’ll swear you’re playing the same game over and over, because you pretty much are. 123Bee Room Escapes fall into two basic categories: Traditional, which generally revolve around finding the combinations to number locks, and Fantasy, which require you to click on objects in a ridiculous and arbitrary order (put the magic jewel in the fish’s mouth and use the glowing orb to turn the pony statue into a fairy wand!) until your brains fall out your ears in dripping chunks. They’re dumb, yeah, and you’ll soon want to murder whoever wrote the single musical track that 99% of the 123Bee games use. But......if I hated them, would they be here? Not a bad solution for those craving a Room Escape fix. 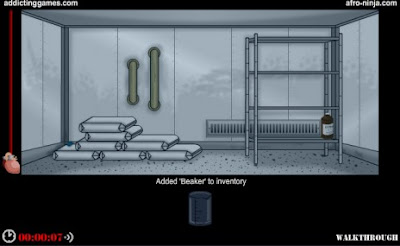 The Big Mac: Cheap and Greasy Yet Strangely Fulfilling
http://afro-ninja.com/games

The Afro-Ninja Escape Series seem amateurish at first glance, but I found them surprisingly challenging. The graphics are quite simplistic (maybe you’re trapped in South Park?) and there doesn’t seem to be much to do in each game....ah, but keep playing. This series is diabolical and forces you to think outside the box and look absolutely everywhere for clues and useful items. I’m impressed with how much is hidden within a very small space! Again, these are quite short, and probably quite easy for those who are attuned to the nuances of Room Escapes. But they’re not bad at all. One big flaw: not only is your progress timed, but it’s timed with a really loud, really distracting ticking clock sound. Fortunately, you can turn the sound off. I’ve yet to play the latest Escape, in which you’re trapped in a freezer and slowly dying of hypothermia -- sounds a little intense. But these are good for a newcomer to the genre who’d like to get a sense of Room Escaping before tackling something tougher. Something like... 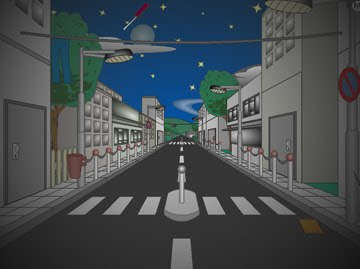 This one’s rather famous. The Mystery of Time and Space (MOTAS) is an epic Room Escape odyssey with 20 levels. It’s also not that great. Not bad, but unworthy of its hype. Sorry. I did enjoy it, for the most part; it has a smooth difficulty curve and remains unpredictable throughout. However, as it gets more elaborate, it also gets more ridiculous. The last few levels incorporate UFOs, warp spheres, and time travel...and it just does not work. It breaks the intrigue of the game. I don’t mind sci-fi elements, but they should be consistent and not feel like gimmicks. Honestly, I think 20 levels might be a tad too many; MOTAS feels bloated and unfocused, crammed with insufferable elevator music and arbitrary logic that warranted way too many trips to the Walkthrough page. As I said, I did enjoy it, but at the end (which is a disappointing non-end, really), I felt more exhausted than satisfied. Recommended for patient gamers only. 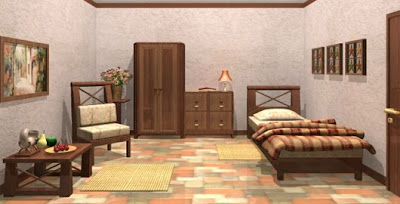 
“Okay,” you cry, “I just want a good, safe, typical Room Escape to try out!” Well, my friend, I advise you to visit TomaTea, a site which hosts a good, safe, solid selection. Here you will find all the tropes of the genre, from Myst-style pre-rendered graphics to soothing music to oodles of hidden keys, bizarre combination locks, and slips of paper on which invisible benefactors have scribbled cryptic hints. Nothing much to shock or surprise, but sometimes, we embrace the familiar because it is comforting. I have to say, the Room Escapes made by TomaTea themselves are of very good quality -- brain-teasing, but not so hard that you suffer self-inflicted hair loss. They have one nice, distinctive feature: the game informs you if you can’t solve a puzzle due to lack of clues. Some might not like this (it cuts the challenge level considerably) but it’s handy and it saves a lot of frantic guesswork. Learn to look closely at the Room’s details and you’ll do fine -- and have fun in the process. 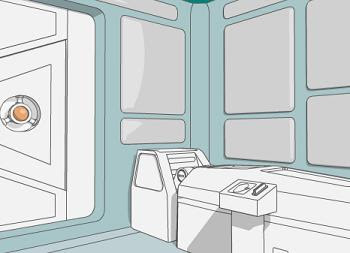 The Sushi Burger: Tastes Odd -- Why Is It So Delicious?
http://terminalhouse.com/

A lot of Room Escape games come out of Japan, and few are as Japanese as the Terminal House series. I dunno who makes these (most of the site is untranslated) but I suspect it may be Stanley Kubrick in disguise. These rooms are hard sci-fi all the way: smooth white surfaces, odd machines, whooshing Star Trek doors, and energy drinks. Lots and lots of energy drinks. They’re also beautifully animated and scored with soothing, ambient music that eases the stress of solving the puzzles. I like these a ton; they’re unique in a genre that repeats itself constantly. Not that the Terminal House series isn’t guilty of repetition -- besides the aforementioned energy drinks, there’s a bit too much reliance on magic number squares, to the point where you can pretty much anticipate most of the puzzles. But the gamemakers are clearly trying new things, and their distinct visual aesthetic makes for a wonderful space to occupy as you try to Escape. Kudos! 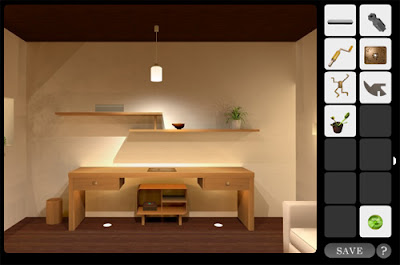 The Upscale New York City Hamburger Eaten In A Window Booth at P.J. Clarke’s: Holy Shit, This Is Nirvana
http://neutralxe.net/esc/

So you want the best value for your time? Wanna know the best Room Escape games I can possibly recommend? I have one name for you: Neutral. The Escapes crafted by this Japanese designer are so...damn...good. The graphics are fabulous. The ambiance is engrossing. The puzzles are intricate, devious, and stack on top of each other in ways you’ll never expect. Make no mistake, the Neutral Escapes are a true challenge, but they’re helpfully ranked by difficulty and you can save your progress at any time. Yes, they repeat themselves (again with all the screwdrivers!), but not in such a way that you can predict how to solve them. Instead, the familiar elements become like beloved signatures. Each Escape has a theme, and each theme is explored delightfully through its puzzles and visual motif. As a lover of puzzles and brainteasers, I was in heaven playing these. Neutral has also made a series of Christmas-themed Escapes that are more simplistic, but very cute and worth a look. I hope there are more to come -- but at the same time, I am willing to wait, because Neutral obviously puts a ton of effort into each Room and it shows. This is art.

So, there are the most notable Room Escape games I’ve found. If there are more really good ones out there, I hope someone will let me know. And I hope you enjoy these as I have! Now...damn, I need a hamburger.
Posted by Dang-Blasted at 11:59 AM