To Squee Or Not to Squee: Mr. Holmes 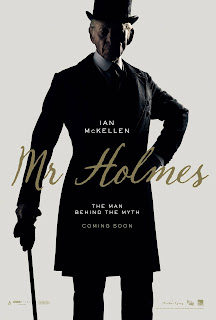 A very old man, recently abroad in Japan, returns to his private estate in the English countryside. The man is Sherlock Holmes. He is played by Sir Ian McKellen, and it’s hard to imagine a more delicious-sounding actor/character combination. But hold your saliva. This movie is going to be a bit different. When we think of Sherlock Holmes, we think of fireworks. Dazzling, snappy detection. Robert Downey Jr. punching thugs or Benedict Cumberbatch flicking clues around like a superhero savant. Mr. Holmes is too meditative for all that. In the movie’s world, Holmes is real and Arthur Conan Doyle isn’t; the entire literary canon was written by Dr. Watson. There was no deerstalker hat, no violin. 221B Baker Street was a ruse to mislead the tourists. People ask Holmes to do “the thing” where he eyeballs someone and deduces everything about them. He can do it, but (as he rather hurtfully demonstrates at one point) it’s not much fun to be put under a lens. This Holmes is a quiet, sad, wry old man. And full of fear.

The last time Sir Ian starred under director Bill Condon, they made Gods and Monsters, about the last days of gay horror director James Whale. I didn’t really like it. It was too melancholy, too much a dirge. I feared Mr. Holmes would be more of the same, would take all the fun out of a legendarily entertaining character. Luckily, for all its pathos, this is still a Sherlock Holmes movie. We expect clues, and we get them: a scattering of plaster, a box inscribed in Japanese, dead bees. We expect mysteries. The elderly Holmes has returned to his cottage, his apiary where he tends his bees. His Irish housekeeper, Mrs. Munro (Laura Linney), has a young son, Roger (Milo Parker), who regards the old detective with keen fascination. Holmes has a secret: his titanic brain is slipping into senile dementia -- for him, a fate worse than death. A mystery he can’t solve. As he develops a bond with Roger and they try to figure out why the bees are dying, two flashback stories are woven in. One is Holmes’ final case, involving a woman (Hattie Morahan) who uses a glass harmonica to speak to her miscarried children. The other sees Holmes in Japan, seeking the prickly ash, a plant which may cure his senility. 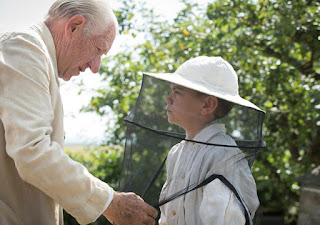 We have the building blocks of a good, meaty Holmes adventure: exotic locales, hints of the supernatural, hidden motives. What the movie does so well is show how the world of Holmes is slipping away. Holmes, the real man, is afraid his memories aren’t real -- or, perhaps, are becoming confused with the sensational penny dreadfuls Watson wrote about him. He fears that when he’s gone, the fictional Holmes will be all that remains. Lurking behind the entire story is the fallout from World War II, an event which broke our species. The boy, Roger Munro, lost his father and his innocence. The Japanese lost too much to quantify. Paranormal séances and brilliant detectives became trite playroom toys of the past. Holmes can feel himself, and what he represented, disappearing. But he’s still too brilliant, with too godly an ego, to give up, and that’s why Mr. Holmes is so much more pleasurable to watch than Gods and Monsters. Because why should Sherlock Motherfucking Holmes go down without a fight?

The film is beautiful -- in its portrayal of the time period, in its intercutting of mysteries as more revelations occur, in its acting. Sir Ian is just as Sherlockian as we’d want him to be, with that undercurrent of sadness he does so well. Milo Parker is outstanding as a boy whose impish face can reflect delighted curiosity or deep hurt, a child of war who learned about hardship before he had the facts of life. During the film, tension develops between Holmes and Mrs. Munro, who is far from comfortable when her son starts spending all his time with the detective and snottily correcting her grammar. Laura Linney transcends the “disapproving matron” stereotype. She fears Holmes, whose brain is so far beyond hers, and fears her son, who already has the gaze of a jaded adult man. Every major character in the film, including the woman from Holmes’ fateful final case and the Japanese man (Hiroyuki Sanada) who helped find the prickly ash, fears something. Some unsolved mystery. The film is about coming to understand that mere clues aren’t everything. Except when they are. If that doesn’t make sense, well, that’s life, first and last of all mysteries.

The idea of an elderly Sherlock Holmes has inspired many; I can think of Michael Chabon’s The Final Solution and Neil Gaiman’s “The Case of Death and Honey,” and Mr. Holmes itself was based on A Slight Trick of the Mind by Mitch Cullen. The story came to Condon, a director with an oddball filmography that includes historical dramas, horror, Disney, even Twilight movies. (The idea, I’d guess, was to elevate the material; all it did was prove that not even a pedigree director can salvage Twilight.) Both Mr. Holmes and Gods and Monsters star Ian McKellen as an elderly and lonely man, famous in his prime, raging against his mortality. But Mr. Holmes, by incorporating the crafty puzzles of a Sherlockian mystery or two, succeeds far better as a eulogy. It’s about bitterness, yes, and heartbreak, and hurtful consequences. But it’s also about how to celebrate a life lived, rather than letting it rot. It’s about what can rise from the ashes, and if you’ve seen Mr. Holmes, you’ll know the significance of that statement. I recommend you see Mr. Holmes if you have not already. It’s wonderful. 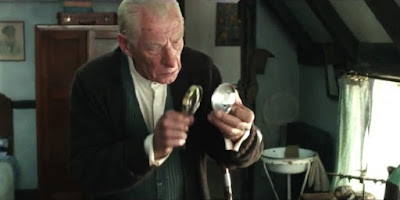