And so, Broken Age concludes on the same mild, inoffensive note with which it began, leaving behind a legacy of.......something or other. Probably a horde of wannabes waving their own Kickstarter banners, wondering why they aren’t reaping mountains of strangers’ money. This game may be remembered simply for the stubborn goodwill of its many, many benefactors. We all helped make Broken Age happen, guys! It’s our baby! Kumbaya! I almost wish it had dared to alienate somebody. If crowdfunding is the last hope for original, creative game development, awesome, but I worry that crowdfunded games will fall into the same trap as mainstream mega-releases: comfy mediocrity in the name of never, ever causing buyer’s remorse. Only worse, because everyone who donates to a game’s Kickstarter has their own idea of what they want, and in order to please as many folks as possible, you gotta slap margarine on white bread as opposed to constructing a mighty, spicy, cheesy, saucy grinder. Maybe nobody’s stomach will be full, but we have to consider that one guy who’s allergic to sriracha!

But enough weird sandwich talk. What does Act II of Broken Age do, or not do, with its premise? I see no need to recap the entire plot; read my post about Act I for that. We left off with the predictable yet sophisticated twist that the tales of Shay and Vella exist concurrently, and that Shay’s “spaceship” is, in fact, the monster that’s been terrorizing Vella’s people. More fascinating to me was how Act I ended with Shay and Vella switching places. Vella is now trapped inside Shay’s half-destroyed ship, while Shay wanders the villages outside. What great implications! Implications that...never really go anywhere. Yeah, it’s fun to see how both environments have changed during the intermission, but it wears thin when we’re just galumphing around the same old places, talking to the same people. Act II came out eight months later than projected, and I assumed this meant the developers were cooking up something huge, for which Act I was merely a teaser. Instead they just juggled some details and called it a day. Lame.

So now, funnily enough, Vella inhabits the more interesting part of the game (Shay’s ship, which she must sabotage), while Shay’s stuck in the bland half (where he must help jumpstart a 200-year-old derelict ship). The result? Vella’s shipboard adventures became my favorite part of the entire game, while Shay’s quest is so...so...so...fucking...tedious. Good lord, what a contrast. Vella is discovering a sinister conspiracy that redefines her entire world...and Shay is purchasing a cupcake at a junior bake sale. Vella must somehow infiltrate the deepest workings of the monster-ship and bend it to her will...and Shay has to make a tree laugh. And it’s not just story-based tedium; Vella’s puzzles are interesting and well-conceived, arising organically from her circumstances, while Shay’s puzzles entail hiking all over the damn place and interacting with no less than nineteen different characters. It’s exhausting. Completing both halves of the story became a punishment-and-reward process for me: “Hey, if you make it through another of Shay’s stupid fetch quests, you can switch over to Vella for a bit! Stay strong!”

I complained that the puzzles in Act I were easy. I may not have been the only one, and boy, did the developers ramp up Act II’s trickiness. There’s that challenge I was looking for! Except some of the puzzles kinda suck, because they unfold in unfair ways. As I said, Shay’s story has to juggle a huge supporting cast, and it’s easy to forget who he’s spoken to about what...and every time he does something, he has to make the rounds again in case a new dialogue prompt has popped up somewhere. Vella fares better, and I loved one puzzle that entailed searching a room for clues, because I had to make my own deductions based on the clues and it felt great. Problem was, the game gave me a handy chart to help with the puzzle but gave me no way to fill out the chart, unless I wanted to use a Sharpie on my laptop screen. WTF? What really bugged me were instances where a clue from one environment was necessary to complete something in the other. It breaks the reality of the game! Shay may have revealed the name of his childhood plushie to me, the player, but Vella couldn’t possibly have that knowledge! And if Shay is stuck on something, do I need to switch to Vella and scan the entire ship for answers, or not? See the problem? Difficult puzzles are only fun when they don’t cheat. 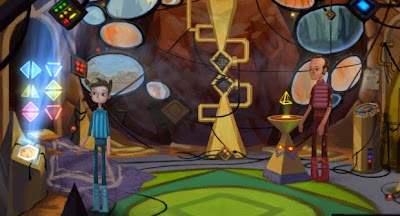 In the end, puzzle deviousness aside, Act II of Broken Age is just more of the same. Yes, we learn why Shay’s space journey is a sham and why maidens are being kidnapped and so forth. It’s cool, I guess, but it felt like the developers began the game before they knew their own plot, and just made shit up as they went. When the game bothers to unveil some villains, they’re interesting enough, but they feel like they belong in a different game, or maybe one of those Star Wars novels that are now non-canon, HA HA, WE DRINK THE BITTER TEARS OF NERDS. A twist involving Shay’s computerized parents is cool, but nobody reacts strongly enough. Actually, nobody in the game reacts much to anything. Oh, hey, we sacrificed our daughters on a complete lie! Let’s fail to be shocked or guilty in any way! Shay is a vanilla cone of blandness, and the only character I gave two shits about was Vella, who retained her knack for sweetly wreaking havoc (honestly, she’s one dead family away from becoming a supervillain). Sure, I found the supporting cast amusing (I particularly liked Curtis the hipster lumberjack and the trio of dysfunctional sentient dinnerware), but none of them behaved like human beings, probably because their sole function was to require something from Shay, give him something in return, then cease to matter. What about the endgame, the point at which Broken Age might have broken free? Eh...a final puzzle that resets itself if you don’t topple the dominoes in the exact right order, and that, again, involves Shay and Vella apparently reading each other’s fucking minds. Then a heartwarming ending that completely ignores the powerful, murderous bad guys it took the time to set up. Kumbaya.

Soooo, Broken Age was fun. I liked it more than I disliked it. I’ve been criticizing it so much because I’m just so let down by how it never took its own potential seriously. Its art design is outstanding. Its voice cast are skilled. Its plot follows current trends (yay, a seemingly idyllic quasi-dystopia secretly controlled by shadowy puppetmasters!), but it threw some great details and serious twists into the mix. And if the landbound half of the game was as fun as the shipboard half, I’d have been way more forgiving. But why don’t I feel sated? Why am I left pining for more? When I played Monkey Island, a game that came out ages ago, it satisfied me to my very core. And Broken Age is meant to be the offspring of Monkey Island-style adventure games. Its technical improvements can’t mask its watery presentation, I’m afraid. I’ll play it again someday and maybe it’ll age well, but for now, it illustrates the dangers of overhype. We gave them our money and got something merely decent. Not great, not awful, just...a thing. A game. Point, click, win. 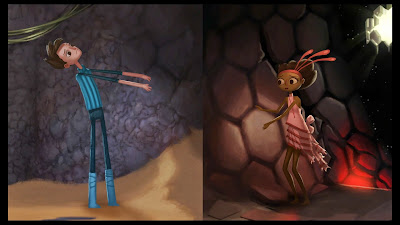