To Squee Or Not To Squee: Imaginaerum 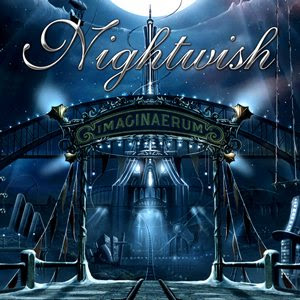 Last summer, I made a post about some things I was looking forward to, and my enthusiasm for the end result versus my fear that I’d be let down. I suppose that the gentlemanly thing to do is actually report on the stuff in that journal as I encounter it and (to quote the original post’s stupid-ass title) squee or don’t squee.

First up: Imaginaerum, the new studio album by my favorite Finnish masters of symphonic metal, Nightwish. Actually, Nightwish is the only metal band in the world I like, mainly because their idea of “metal” includes full-on orchestras and resembles the soundtrack to Lord of the Rings if Tolkien had been a member of a motorcycle gang. Before I review the album, I must briefly address the elephant in the room. A few years ago, Nightwish’s original female vocalist, Tarja Turunen, was kicked out of the band in a very drama-filled manner. She was replaced by Anette Olzon of Sweden, who, while possessing an awesome set of pipes, can’t match the sheer grandeur of the operatically-trained Tarja. For many fans, that was the end of the band, and nothing will change their minds.

I am not one of those fans. And Imaginaerum is fucking awesome.

The album (which was originally titled Imaginarium) is going hand in hand with a full-blown feature film that will be released later. Good thing, because it feels very cinematic. Nightwish has been able to spread their creative wings a lot more recently, and it totally shows. Imaginaerum is bombastic without being annoying and leaps from genre to genre while still sounding like Nightwish at their drum-slamming, guitar-snarling best. Anette Olzon seems comfortable in her duties by now, and the new material is definitely written with her in mind. Tuomas Holopainen, the band’s keyboardist and main songwriter, has composed a gift basket of musical madness that I totally dig, for the most part. I love Nightwish’s old work, but now they’ve gotten so damn interesting!

This metal album actually dares to have quiet moments! The opening song, “Taikatalvi,” is a frosty lullaby. “Turn Loose the Mermaids” and “The Crow, the Owl and the Dove” are laid-back folk ballads. “Slow, Love, Slow” is a freaking lounge song, for Chrissake. Hardcore metalheads will sneer, but I love the outside-the-box approach to music. I also love anything even remotely Celtic and (as on their last album, Dark Passion Play) Nightwish keep leaning in that direction. My favorite track, “I Want My Tears Back,” is a pop-metal blitzkrieg in which wailing bagpipes feature prominently. Hell, yes! And there’s plenty that invokes the more traditional Nightwish, particularly the dark “Ghost River” and the momentous “Rest Calm.” Honestly, the only track I don’t care for is “Scaretale,” which dives face-first into Tim Burton/Danny Elfman territory; it’s too kooky and tries way too hard to achieve what I like to think of as the Hot Topic vibe. Why would you want to achieve that? I fucking hate zit-faced teens who stick safety pins in their noses and put Jack Skellington patches on their black hoodies and worship Jhonen Vasquez and wear pants the size of truck tarps and actually think they’re dark and edgy. But I digress.

All in all, this album is the shit. I dunno if the movie will be any good, but at least we know it’ll have a damn fine soundtrack. Yeah, Nightwish will always be a bit silly and more than a bit over-the-top. Yeah, we’ll always miss the gravitas of Tarja’s singing voice. But now they’re getting to evolve, their lyrics are getting more complex, they’re quoting Walt Whitman, they have bagpipes, and I’m already ready for their next project.