To Squee Or Not To Squee: The Muppets 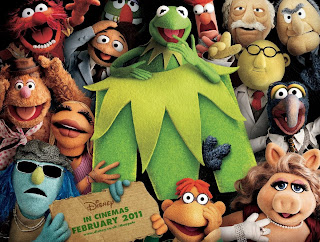 Last summer, I made a post about some things I was looking forward to, and my enthusiasm for the end result versus my fear that I’d be let down. I suppose that the gentlemanly thing to do is actually report on the stuff in that journal as I encounter it and (to quote the original post’s stupid-ass title) squee or don’t squee.

I’m super-ass late in reviewing the new Muppet movie, because I watched it back in November when it first came out. In this case, I think waiting a bit was better than making a snap judgment, because it allowed my first impression (WOOOOO!!!) to make room for some reservations (Ehhh...) and ultimately come to a satisfactory compromise (A’ight).

Basically, this is a really fun and entertaining film that is by no means a masterpiece, but we forgive it anyway. On its own, it’s jolly and colorful, energetic for the kids and witty for the adults. But we’re all most concerned with how it lives up to its pedigree. Of all the things on my original list, this alarmed me the most, because A) the last few Muppet projects have been shit, B) Jason Segel appeared to be on an ego trip and I feared the Muppets would be stuck in the shadow of his big head, and C) Frank Oz didn’t approve. Also, the marketing for the movie got waaayyyyy out of hand. But then it actually arrived in theaters, and you know? It gets most everything right. It’s not trying desperately to be “hip” like the dreadful Muppets from Space; in fact, it’s the bad guy who plots to buy the Muppet brand name and replace our favorite characters with gritty, nihilistic, corporate-approved doppelgangers. Touché.

The plot, about saving the old Muppet Theatre from a vile oil tycoon played by Chris Cooper (who is having way more fun than should be allowed), is just an excuse for songs, dance numbers, sight gags, celebrity cameos, fourth-wall-breaking, slapstick, and tons of callbacks to the good old days of Muppetdom. Since seeing Muppets 2011, I’ve been able to finally go back and watch a bunch of the original Muppet Show on DVD, and yeah, they get things right, more or less. There’s cameos from tons of characters who haven’t been seen onscreen in decades. The modern touches blend pretty well with the retro shout-outs. Now, I have to admit, you can always tell you’re watching a fan-made project. The movie is so enamored with the Muppets of old, so respectful, that you can sometimes see the screen gleaming with fanboy saliva. But at least they poke fun at their own selves for being this way. The happy ending is incredibly over the top, basically a huge spunk load blown over the Muppets, but it knows what it is and winks through the wank.

So, yes, Muppets 2011 is both tons of fun and about as Jim Henson-y as it could be without Jim Henson. It’s not perfect. I wasn’t a fan of Walter, the new Muppet protagonist; seriously, dude needed to get over himself and stop being a little fucking parasite. Jason Segel and Amy Adams were too cutesy for my tastes, but at least they graciously let the Muppets have the spotlight. Kermit was great; Steve Whitmire has been playing the frog for long enough to grasp the Jim Henson vibe. I did miss Frank Oz; Miss Piggy and Fozzie sounded wrong to me without him. But THANK YOU, filmmakers, for reducing my least favorite Muppet -- Pepe the Prawn, who had a huge hand in ruining Muppets from Space -- to a tiny cameo. Another thing I was surprised and appreciative about was that Rizzo the Rat doesn’t even appear, except maybe in the background. Gonzo’s schtick was always his unseemly attraction to chickens and the fact that his lady love was a comely hen named Camilla. Then Rizzo muscled in as Gonzo’s BFF and their double act rose to overdominate (See, again, the ruining of Muppets from Space). Rizzo’s gone, Camilla’s back, and the universe has achieved balance.

Look, if you want to hate on this film because you feel it’s untrue to Jim Henson’s original vision, fine. But I don’t believe the Muppets themselves would want you to -- and, yes, like most of us, I think of them as real people. They’re all about bringing happiness and laughter to the world while keeping their tongues planted in their cheeks the whole time. They’re the hippie dream, played with a wink and some snark. They’re immortal, no matter whose hands are shoved up their backsides. And they know it. And so, I hope, do we. 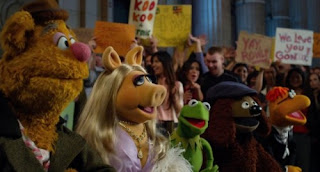