This is the very first video game list I did, back at the end of 2008. Since then I've played many other games, which means that this list would change if I rewrote it from scratch. But I don't wanna, so pretend it's still 2008, or just look at my "Favorite Games" lists from '09 and '10. 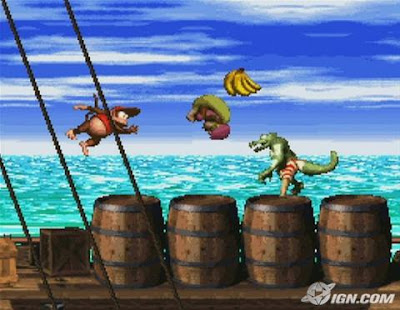 10. Donkey Kong Land 2 (Gameboy)
Not Donkey Kong Country 2, but its Gameboy counterpart. I loved my Gameboy; it was my first-ever console. There were some great games to be had for that little handheld brick, but DKL2 was the first one that made me go, “Whoa.” The pre-rendered graphics of the DK series looked awesome on a Gameboy screen as well as on an SNES, and the gameplay itself was so weird and interesting! Pirate ships, and roller coasters, and you could turn into a spider, and there was a whole secret world to unlock, and, and....I could go on and on. And I haven’t even mentioned the extremely awesome music, or Dixie Kong’s ponytail twirl, which was like the most useful move ever. (Seriously, did anyone EVER play as Diddy?) The first DK was okay but too short, the third one sucked, but this middle child was freaking neat. Now that I have an SNES emulator, I really should find Donkey Kong Country 2. Because if it was this good on a mere Gameboy, just imagine.... 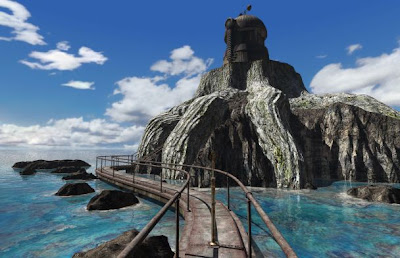 9. Riven (PC/Mac)
I love the Myst series because it combines gorgeous visuals, mind-bending puzzles, and pacifism -- three things I can’t get enough of. It’s hard to pick my fave. The first Myst has grown dated, plus I can beat it in like forty-five minutes. Myst 3 was too short and too easy. Myst 4, while probably the best-looking entry, had a rather forced plot, bad dialogue, and jumped the shark at around the time Peter Gabriel started mumbling to you about spirit guides. And I hear Myst 5 is pure shit. That leaves Riven, an amazing sequel whose graphics are still eye-popping today, whose puzzles are pure genius and evil in the best kind of way, and which feels like an actual fleshed-out story rather than a series of episodes. It’s the only Myst game to be set entirely in one world, a world so real you can smell it. Everything flows smoothly, all elements connect, and solving that damn spinning dome puzzle is way more satisfying than shooting dudes in the woods. Sorry, Solid Snake. 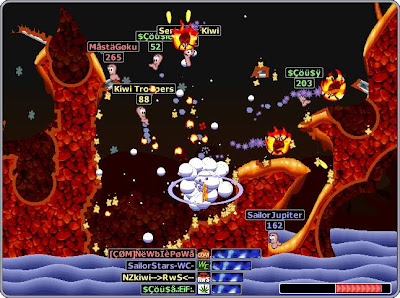 8. Worms Armageddon (N64)
I said I enjoy pacifism, but comic violence is just fine. Nothing, but nothing, relieves stress like commanding little cartoon worms to blow the living fuckadoo out of each other. This game is absolutely nuts and utterly addicting. Swinging on ninja ropes, flinging explosive bananas and sheep and giant cement donkeys, screaming with rage when your worms wind up in the drink (“Oy! Nutter!”), cackling as you obliterate half the map with a Holy Hand Grenade, getting some friends and staging an invertebrate World War.....I love it, I love it, I love it. It makes me laugh and be happy. And there’s tons of actual strategy involved! You have to think fast, improvise, plan in advance, and alter your plans constantly as the very landscape is methodically blown to pieces around you. There are tons of games like this, but none of them have the same energy, absurdity, and all-around awesomeness as Worms Armageddon. Not in my opinion, anyway. 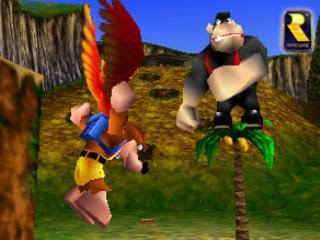 7. Banjo-Kazooie (N64)
Is it a run-of-the-mill Donkey Kong knockoff churned out during the glut of cartoony 3D platform games that swamped the market in the wake of Super Mario 64? Probably. But it puts a big grin on my face nevertheless. This bizarre, off-color odyssey, in which a cheerful bear and a cranky bird team up to battle an evil witch, is perfect fodder for a young furry-to-be and never fails to charm me. Like many games of my childhood, it now seems way too easy, but it sure as hell wasn’t way back when! And that damn Rusty Bucket Bay STILL makes me grind my teeth. But Banjo-Kazooie had real character and a great sense of humor to it, and since all gamers are nostalgic by nature, I suspect that no one will ever forget about it entirely. Forget that “Nuts & Bolts” travesty on the Xbox, kids -- Banjo and Kazooie used to bat for Nintendo, and they rocked. 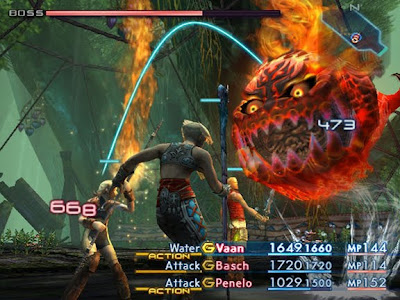 6. Final Fantasy XII (PS2)
Shut up, okay? I’m still new to the franchise! The only FF games I’ve played in any depth are IV, X, and XII. I will get to the others eventually, and probably love them to death. However, in terms of enjoyment and immersion, FFXII narrowly edges out FFX as my favorite Final Fantasy entry thus far. Purists will whine about how they eliminated random encounters and made the game play like an MMORPG, or how they copypasted the world from FF Tactics rather than coming up with something new, but I really don’t care. FFXII has most of the best elements of an MMORPG (massive, nonlinear world; oodles of sidequesting) without the drain on your real life. I’ve spent somewhere in the ballpark of 150 hours playing it, and still haven’t made it to the end. Few games can hold my interest for that long. It’s gorgeous, it’s fun, it has dinosaurs, and I will defend it with my honor....at least until I start playing FFVI. Or FFVII. Or....never mind. 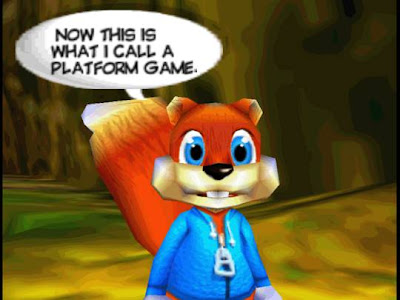 5. Conker’s Bad Fur Day (N64)
I still can’t believe they got away with it. He’s a cute little squirrel in an R-rated world of bathroom humor, gratuitous gore, movie references, and drunken pissing contests. Conker is the antidote to all the aforementioned cartoony 3D platform games, and the thing is, he’s better than the rest! The entire game was context-sensitive and everything you did was plot-driven, as opposed to most platform games, which are just massive scavenger hunts. Conker’s BFD ain’t perfect (the War Zone sequence sucks and goes on forever), but it was seriously ahead of its time. Damn you, Indigo Prophecy! Damn you for destroying context-sensitive gameplay! We could’ve had an entire franchise based around a foul-mouthed British rodent with a hot girlfriend who hits things with a frying pan! But NOOOOOO. Sigh. 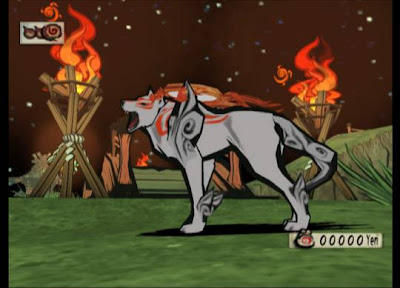 4. Okami (PS2 and Wii)
A game this good was guaranteed to fail. Too bad, ’cause few games are this original or beautiful. You probably know the premise, but just to remind folks: you play as the Japanese goddess Amaterasu, in the form of a wolf, vanquishing demons from the land. The graphics are amazing, like an oil painting come to life. The gameplay is innovative and fun, revolving around a “celestial brush” that allows you to affect your surroundings with divine calligraphy. Apart from that, it’s an awful lot like the Zelda games, but since the Zelda games are supposedly really good, what’s the issue? Even without the hours of sidequesting, I could waste the day just running around enjoying the art design. Plus the game has aliens. It’s set in Japanese mythology....and it has aliens. There is no way it could be any cooler. 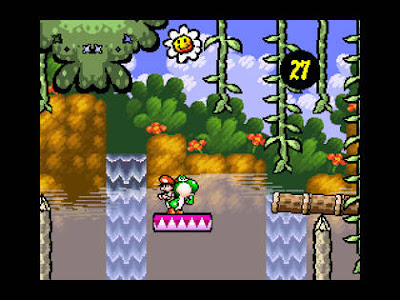 3. Yoshi’s Island (SNES)
Squeeeeee! I’m replaying it while writing this, and it’s just as great. I love how every now and then, they’re able to make a Mario game that successfully attempts something new and different (see also: Super Mario RPG and the Paper Mario series). With Baby Mario upon his back, the jolly green dinosaur-thing explores a series of quirky environments, eats bad guys, throws eggs, and is really cute all the time. I love the pastel graphics and unique gameplay, and even when the game is frustrating, I can roll with it because it’s so well-designed. As countless others have pointed out, Baby Mario is annoying as shit when you lose him and his piercing wails assault our ears. But I forgive the game for that one flaw. Thank you, Nintendo, for trying something different with the Mario franchise and producing such a winner! You managed to make a game that’s both adorable and badass. 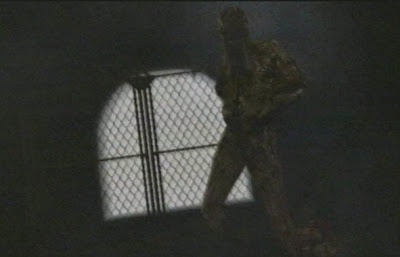 2. Silent Hill 2 (PS2)
I’ve loved all the Silent Hill games (well, except the fourth one, obviously), but no other game apart from entry #1 on this list has sucked me in, creeped me out, and left me as satisfied as SH2. It’s the only game I’ve willingly played in one sitting. The story is so simple -- you’re just this sad guy pitifully searching for his dead wife -- and it’s all you need for a trip straight to hell by way of the abandoned, mist-shrouded town of Silent Hill, a place that preys on the mind and soul. What’s creepy isn’t that there are monsters, but that the hero is somehow creating them just by being there. Combine that with grimy, unsettling environments, a brilliant sound design, fucked-up supporting characters, amazing ambient music, and Pyramid Head, and you get a game that’s impossible to escape from even if you wanted to. Games don’t scare me very often, but SH2 fucked me up, man. And I loved every minute of it, from the dangling bodybags in the hospital to the corpse with my face to the flaming stairway. Playing this game is like eating a rich, full-course meal. That can rape and kill you. 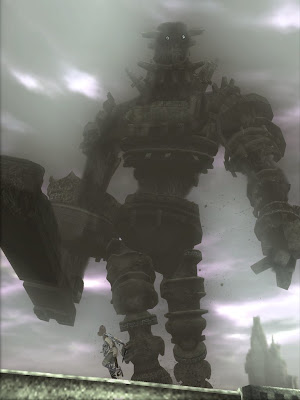 1. Shadow of the Colossus (PS2)
With any luck, anyone who’s played this game can agree with me on how unique, atmospheric, and utterly wonderful it is to play. It’s a fantasy adventure that throws out most of the trappings -- lots of bad guys, a complex plot, weapons and items -- to focus on a young man, his horse, and sixteen titanic beings of flesh and stone that he is commanded to destroy in order to revive his dead lover. You are all alone in a massive, beautiful world. All is silent but for the howling of the wind. You can explore at will, hunting down the colossi and systematically engaging them in combat. Each dynamic battle is different, requiring patience, experimentation, and use of the surrounding environment to suss out your opponent’s weak spots. There is a deep element of tragedy to this game; the hero has suffered a great loss, but the colossi themselves are not evil, and there is something profoundly bitter about toppling each one. Bitter, but deeply satisfying at the same time. This game plays with your emotions and forces you out of the detached nihilism that normally goes with video gaming. It is haunting and sublime, flawed yet uplifting, and while it will scare away the macho, gun-blasting Xbox crowd, it’s a must for anyone who wants a smart, gorgeous, and provocative gaming experience. I absolutely love it and will return to it again and again until my PS2 gives out entirely. And then I’ll find it online. Because it’s worth it. Hell, this game was responsible for me buying the PS2 in the first place. It’s one of those games that redefine what’s possible.
Posted by Dang-Blasted at 6:04 PM