Did this back in the year of aught-nine, when things were different. Kids these days don't know how well they've got it, I tell ya. I should mention that these are my favorite games I FIRST PLAYED in 2009, not my favorite games RELEASED in 2009. In case you're easily confused. 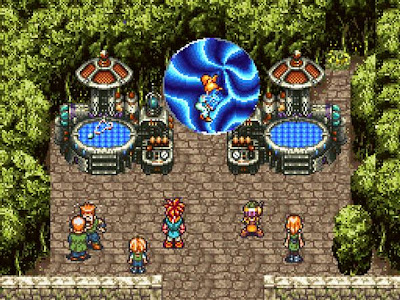 Chrono Trigger (SNES)
My ex-boyfriend introduced me to plenty of JRPGs, and you know.....this one may be my favorite. Not only is it colorful and gorgeous, not only does it rely upon a very cool and unique battle system, but the story is about the best story in any video game, ever. Time travel is a risky genre, but Chrono Trigger nails it with an epic tale that stretches across several time periods, sending the player careening from dinosaurs to knights in armor to postapocalyptic robots...and beyond. The story is jam packed with twists and turns that NOBODY would ever see coming, and it all fits together like an antique watch. Rich and satisfying, every moment of it. Shame that this didn’t spawn the same franchise as its cousin, Final Fantasy, because I’d be so happy if they were releasing Chrono Trigger 6: The Avocado of Time for the PS3 right now. Eh, maybe in an alternate universe. 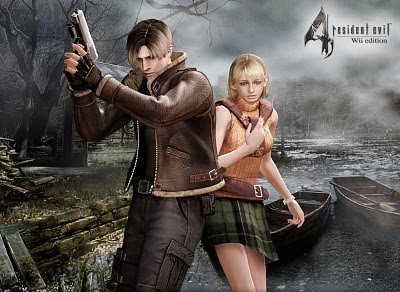 Resident Evil 4 (GameCube, PS2, Wii, etc.)
What is it about this game that makes everyone love it? I barely have any interest in the RE franchise, or over-the-shoulder FPS’s, but.....fuck me, I loved the hell out of RE4. I think it has two big things going for it. One: a really well-designed game engine that works like a dream, including superior targeting, superior inventory, and a perfect difficulty curve. In other words, anyone can get the hang of playing it, but it offers a challenge to all. Two: the utterly retarded (in a good way) story about infected Spanish peasants and genetic parasites and all that jazz. Tongue planted firmly in cheek, the plot marches from one hilarious set piece to another. This game is FUNNY. And if you take out the NY, you get FUN, which this game also has in abundance. Not to mention replay value. Hell, I want to play it again right now. And, you know, Ashley wasn’t all THAT bad, people.

Okay, maybe she was. 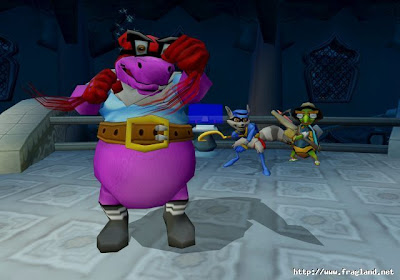 Sly 2: Band of Thieves (PS2)
I couldn’t decide which Ratchet & Clank game I liked best, but with the Sly Cooper franchise, it’s easy. Like the prime roast beef between two decent slices of bread, Sly 2 sits between Sly 1 (too short and linear) and Sly 3 (basically a glorified expansion pack for Sly 2). Sucker Punch Productions has my attention for how well they handled a stealth-based game and moved it seamlessly into a sandbox environment before every single fucking game had a sandbox environment. Yes, I get off on bounding across rooftops and picking pockets as a sexy raccoon thief, but such activities are honestly such fun that I could do it for hours. When the actual gameplay missions kick in, they offer an endlessly diverting series of challenges that never drag the game down. The pulpy, 1920s-style presentation of the story works great, and if you get sick of playing as Sly, there’s always his sidekicks, the face-bashing one and the bomb-planting one. But you will never get sick of playing as Sly, trust me. THAT is gaming done right. 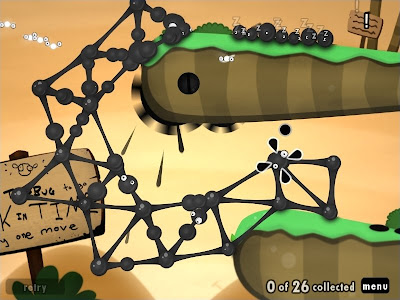 World of Goo (PC/Mac)
I cannot say it enough: I ADORE this game. It is the sort of game where, once I start playing it, it’s near impossible to stop. Relying upon an endearing and quirky aesthetic and an incredible physics engine, this little puzzle opus works the gray matter in an almost sexual way, as you work in tandem with the laws of gravity and architecture to help cute little slimeballs reach their goal. I have no idea what’s actually going on in this game, story-wise, but you know what? More games could use a little surreal weirdness. (In fact, the three games I just listed have a good dose of it as well, hence my enjoyment of them.) I am praying they make a sequel to World of Goo, possibly entitled Galaxy of Goo. Because, no matter how many hours one can spend playing with goo that bounces, connects, drips, sticks, explodes, flies, and hacks computers, it’s not enough. Not nearly enough. The goo has me! Bow to the goo!
Posted by Dang-Blasted at 9:11 AM