2010 was the “Indie Year” for me. A few rather crucial things happened for me in 2010: I got a fancy new computer, my rural home finally got internet access beyond fucking dial-up, and (perhaps most crucial to this list) Steam became Mac-compatible. Yeah, I’m a Mac user, and I enjoy the type of games you’d expect a Mac user to enjoy; namely, indie arthouse games. In fact, none of the games on this list are console-exclusive. Deal with it. What’s important to me is that new avenues of gaming have opened up, and I couldn’t be happier. Sooooo, here are my favorite games of the year!

Braid (PC/Mac/Xbox/PS3)
I know I’m a little late jumping on the Braid bandwagon, but better late than never! God, this game is good. Pretentious, but good. If you can put up with the somewhat high-minded aesthetic and overly open-ended story, you get an incredible puzzle-platformer, devious and evil in its very simplicity. This is a game that takes the skeleton, the basic architecture, of platforming and subverts it in one innovative way after another, first by giving you the power to rewind your own death, then by handing you a series of time-manipulation powers that turn the puzzles into intricate little ballets of patience and precision. What’s so wonderfully sadistic about Braid is that most of the puzzles are quite easy to complete; it’s figuring the damned things out that keeps you up all night. Playing Braid makes you feel smarter. Factor in the gorgeous, moving-watercolor graphics, the haunting music, and the hilarious/brilliant shout-outs to genre classics (is that...Donkey Kong?!), and you have a game that celebrates the old while ushering in the new. To translate that to non-pretentious-artfag-speak, OMG THIS GAME FUCKIN ROCKS DUDE. 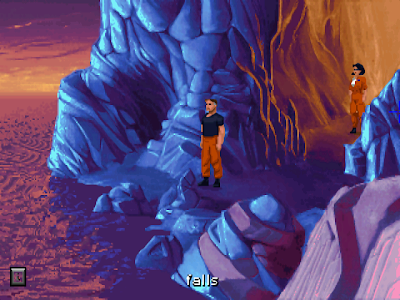 The Dig (PC/Mac)
Speaking of old-school gaming, I have a bit of a boner for point-and-click adventure games, some of which can be found on Steam. I was blown over backwards by The Dig, a 1995 sci-fi extravaganza from LucasArts, back when LucasArts was all about making fun games and less about kneeling to suck George Lucas’s pruney pink lightsaber. I love pre-rendered environments and this game delivers an orgasmic eyeful when three human astronauts are mysteriously transported to a bizarre, dreamlike alien world covered in ornate crystal structures, trippy geometry, and marvelous alien technology that naturally still works. The world portrayed in The Dig is genuinely beautiful, and the designers put real effort into envisioning an alien environment, and aliens, that aren’t like anything you’ve seen before. Few games can capture the wonder of simple exploration, but this is one of them. Now, it’s far from perfect -- the crude animated cutscenes are pretty pitiful and it does occasionally enter the dreaded “madly-click-on-everything-until-something-works” territory. But if you’re playing it in the first place, you can deal with the shittier aspects of point-and-click gaming and simply bask in the glory of its atmosphere. 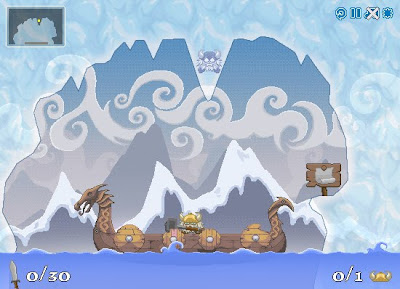 Ice Breaker (Free Online)
I hate this damn game. I hate it because I love it and it’s the most addictive thing I played all year. I may have tried it once or twice in the past, but this was the year I actually paid serious attention, and before I knew it, I was up all night saving those damn little vikings. If you don’t know, this is a simple physics puzzler, available for free online, in which you have to rescue vikings by making strategic cuts in the ice that imprisons them. Now, all physics puzzlers are pure evil, and this one takes addictive, hair-tearing mania to new heights. In addition to breaking ice, you have to cut ropes, kill trolls, manipulate birds and ramps and boulders, deflate fat ladies (don’t ask), and generally try everything before you find the solution, and the game’s physics are so finicky that even the “correct” method may take multiple attempts before it works right. It’s torture, and yet you can’t....fucking....stop. Because, damn and fuck it all to hell, it is so much fun to rescue those little vikings with their cute little beards. You hold your breath and bite your nails, hoping they’ll land in their little boat, and when they do......bliss. Until the next puzzle, and the next, and the next. Ice Breaker is the gaming equivalent of crack. Beware. 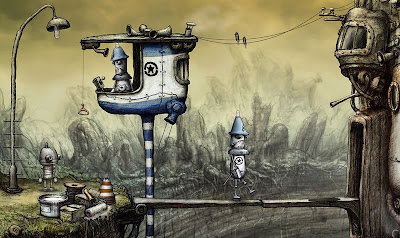 Machinarium (PC/Mac)
Point-and-click odyssey number two! This one is not retro, but brand spanking new, and also amazing. Machinarium is set in a world inhabited entirely by robots, a quirky and vivid metropolis of metal, oil, and rust whose residents communicate their problems in adorable little thought bubbles. It is here that our charismatic robot protagonist must save his girlfriend and foil a terrorist plot by -- what else? -- exploring, interacting with the environment, and picking up random items, each of which has Exactly One Use. So, standard adventure game, but presented in such an innovative and lovable way! Again, the art design and music make the game quite gorgeous, and the puzzles are usually pretty brilliant in how they fit together. There’s a handy hint system, but (in a stroke of genius) you must play an annoying little arcade game to access it. Oh, yeah, Machinarium makes you work your brainbox no matter what, and you learn to pay close attention to detail -- which is good, because this strange, monochromatic junkyard universe never loses its fascination or appeal. I am SO ready for whatever the makers, Amanita Design, create next. 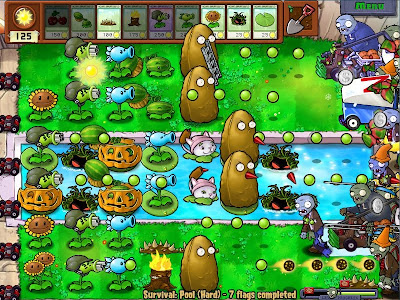 Plants vs. Zombies (PC/Mac/Xbox)
And thus we come to Plants vs. Zombies, which I began playing at the start of 2010 and have been playing on and off ever since. Tower defense games have never interested me that much, but this one is an all-time winner on every front. The zombie hordes are coming and you must defend your cozy little suburban home by choosing from a massive collection of flora, each of which helps defeat the undead in its own way. You’ve got your offensive plants (peashooters, spore-spewing mushrooms, cabbagepults...), your defensive plants (wall-nuts, spikeweed, potato mines...), your explosive plants (cherry bombs, chili peppers...) and so forth. It’s a race against time, and you’d best be using your brains because they’re what’s on the zombie menu. This game is colorful, cartoony, cheerful, and utterly hilarious at every turn, especially when the zombie dolphins pop up and the watermelons start flying thick and fast. Not only is the campaign mode great, but you gradually unlock a wealth of mini-games, puzzles, easter eggs, and a “zen garden” where you can grow and raise your own plants, stress-free. Plants vs. Zombies has so much replay value that you basically get your money back for buying it, and it is just wonderful....so, so wonderful. I’m sick of the zombie fad, but I’ll never be sick of zombies as long as I can drop giant squash on them.
Posted by Dang-Blasted at 5:25 PM