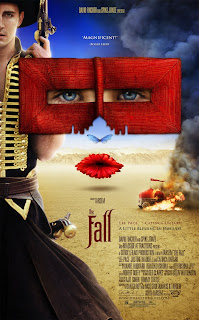 Tarsem Singh’s The Fall is a movie made by an ego, the ego of a man who knows exactly what movie he wants to make, is willing to pay for it out of his own pocket, and isn’t all that concerned with what people think of it. It is absolutely and completely a vanity project. You may hear it billed as a “period piece” or a “fantasy film” but it doesn’t really have a genre beyond...well, maybe “Tarsem film” should count as a genre. There certainly aren’t any films quite like the few made by Tarsem Singh, for better or for worse. If you can set aside your preconceptions of what a film should be about, if you can ignore everything that conventional films have infused in your mind, perhaps you can enjoy The Fall, or at least appreciate its artistry. For me, well, it was a rare film that I was happy to be irritated by.

If you know Tarsem Singh, it’s likely from Nike and Coke ads or music videos (he made the vid for “Losing My Religion”). Otherwise, perhaps you’ve seen 2000’s The Cell, a thriller in which Jennifer Lopez ventured into the brain of a serial killer. The Cell was trashed by most critics, partly because the plot blatantly copies Silence of the Lambs and partly because there’s a list somewhere of actors who must be ridiculed, and Jennifer Lopez is on it. But the backlash had a backlash; The Cell has plenty of fans (myself included) who appreciate it for its amazing special effects, which beautifully evoke the dreamlike realm inside a mind. It teased us with sumptuous images, and now we have The Fall, which takes the dream to a new, deeper level (cue the musical chord from Inception: BWWWWAAMMMMPPH.) This is a film that combines fable and myth, tall tales and silent filmmaking and the context of World War I; it’s a story about stories and those who make them. Anyone can tell a story, with words or their voice or just their imagination. The Fall is about that, and, just as importantly, about the reasons why we tell stories in the first place.

There are two storytellers portrayed in the film. One, played by Lee Pace, is a silent movie stuntman named Roy. The other, played by Catinca Untaru, is a six-year-old Romanian immigrant named Alexandria. Both are in a hospital in 1920s Los Angeles. Both were injured by falling, for very different reasons. Alexandria is friendly, chipper, and curious, wandering the hospital with her arm in an awkward cast. Roy has a charm and easygoing nature that masks deep and bitter wounds; he wants to kill himself with a drug overdose, and enlists the little girl as an unwitting accomplice. To ensure her cooperation, be begins to tell her a story -- a story about a deadly bandit (played significantly by Pace again), an Indian, an escaped slave, an Italian explosives expert, an aboriginal mystic, and Charles Darwin, all of whom unite to conquer an vile ruler named Governor Odious. There’s also a princess in distress who looks an awful lot like Roy’s unfaithful girlfriend. Roy weaves the story from threads of his own bitterness, but Alexandria is not the type to get bogged down by angst, and so the story, as we see it, also receives input from her own, innocent mind. Roy in his anger doesn’t stand a chance against cute little Alexandria and her clear vision. 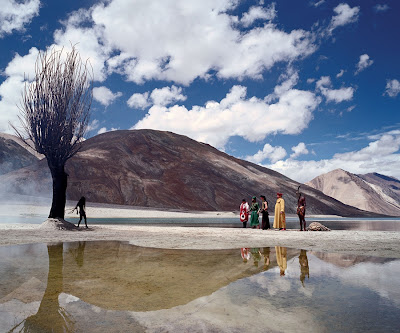 As Roy talespins and both of them envision, we see the heroes of the tale pass through amazing, surreal landscapes, buildings, and dream-spaces. During filming, Tarsem took his production all over the world, looking for real locations that invoke the logic of the subconscious. He also claims that this film was made with no computer-assisted special effects at all. Instead, he turns back time and uses the classic special effects of the early days of cinema, and by God, they still work. The Fall is best when it’s simply lingering on its images. We see the wild-eyed mystic crawl from a burning tree, and later, a map magically appears on his body like a tattoo. We watch as the adventurers descend into a barren, rocky crevasse that unfolds like a magic puzzlebox into a lush, fertile Eden. There is an incredible shot in which a close-up of a man’s face dissolves into an identical landscape in which distant figures and mountains recreate his features. When a corpse is wrapped in a vast hanging shroud, its blood slowly and impossibly stains the entire cloth. These sequences move with a sedate pace, accompanied by echoing orchestral music. Even the action scenes crawl along, taking their sweet time as the heroes do battle with Odious’s guards, whose hideous black armor is inspired by a leather-clad X-ray technician glimpsed by Alexandria in the hospital. This is the work of someone who loves the very act of filmmaking and is not content to compromise his visions as per the demands of some Hollywood studio that can’t see beyond box office gross.

In other words, this is not an easy film to watch and it’s a perfectly easy film to hate. I’m not so pretentious that I’m going to arrogantly dismiss criticism of The Fall for being “lowbrow” or missing the point. The only real point is that Tarsem made a movie that will appeal to a small audience and will likely turn off the majority of the moviegoing public. And that’s okay. I freely admit that I got annoyed by the film’s molasses-like pacing and arch tone after awhile. The storytelling sequences ultimately grow dreary and repetitive. What remains alive is the relationship between the two storytellers and the vitality of their characters. Roy doesn’t think he wants to live, but his self-pity can’t hide his goodness, and Lee Pace plays him as an easily likable man who we’re eager to slap some sense into. Little Catinca Untaru doesn’t “act” in the traditional sense but plays exactly what she is in real life: a smart, no-nonsense little girl who doesn’t know much English but is ready to learn. It’s charming and utterly believable when she gets tangled up in her own sentences; I’ll take her heavily-accented mumbling over any blue-eyed, pearly-toothed child star delivering snappy dialogue like a pro. Both of them convince us that they’re real people, which proves the perfect antidote to the heavily stylized majesty of Roy’s story. By the end, both of them are engaged in a battle of imagination and will, and we pray that the story will end the way Alexandria wants it to, because someone needs to pull Roy out of his funk, dammit! 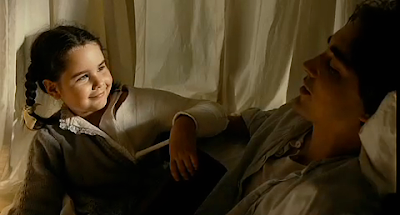 So, there we have it. The Fall is a vain movie, a highbrow movie, often a tiresome movie. But Tarsem wanted to make it his own way, and he did. It refuses to compromise or pander, it avoids cliché, and the ending sidesteps “they lived happily ever after” in favor of, simply... “they lived.” If you can make it to the end, the closing scenes are well worth it, bringing the movie’s themes together beautifully. Even if you can’t bear the thought of seeing The Fall more than once, do see it that once, just so you can see the work of a true maker of movies. Not a director, a maker of movies. Like Terence Malick or Quentin Tarantino or Stanley Kubrick, Tarsem Singh wants you to check your expectations at the ticket booth and just sit there and look. Look at what it’s possible to put on film. Look at how a story can be told to those for whom stories still matter.
Posted by Dang-Blasted at 9:00 AM