Lost: The New Man in Charge 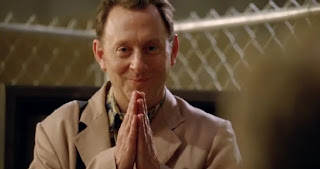 The New Man in Charge

Well, hallelujah and slap me sideways. It must be a good day if I get to recap and review Lost one more time! I just got the DVD of Season Six, and it includes a nice little tidbit: a short film entitled “The New Man in Charge” that acts as a sort of coda to the show. It’s only about twelve minutes long, but they’re pretty awesome minutes. No, it’s not terribly helpful in terms of answering any of the questions that the show left us with. But for a Lost fanboy, it’s one more morsel to happily devour and digest.

“New Man” was apparently cobbled together from scenes that were intended to be in the finale, but dropped because they took up too much time and didn’t fit into the narrative flow of things. It takes place off the Island and focuses on Ben, running errands for the titular new man in charge, who is, of course, Hurley. Ben’s first stop is a massive warehouse in Guam where two rubes -- a somewhat twiggy one and a somewhat hairy one -- have been dutifully loading Dharma-brand food onto pallets for twenty years, without knowing or caring where it goes. Helloooooo, mythology! Now, of all the unsolved mysteries in this show, I was perhaps most annoyed by the Season Two pallet drop, which was never mentioned again after it happened. Where’d that huge mound of people chow come from? If it was dropped from an aircraft, how come nobody saw or heard said craft? Well, now we know part of where it came from, and I guess that’ll have to do. We still don’t know HOW the pallet drops occur, but I’m guessing that zapping Dharma grub to the Island is similar to zapping people and polar bears into the Tunisian desert. Mysterious metaphysical forces and all that. Oh, those naughty metaphysical forces!

So, Ben arrived and promptly sacked the bewildered Dharma workers, who were clearly pretty dim. It takes a distinct lack of brain power to work a drudge of a job for twenty freakin’ years, apparently never leaving the warehouse, and not wonder why. But Dharma clearly loves the dimwits and their lack of questions. I loved that Ben is still as shifty and cryptic as ever, even now that he’s a good guy. As is his wont, he dangled vague information like carrots for the poor pallet-pushers to grab at, then showed them the Hydra Station orientation video. Or should I say, showed us the video, as it was clearly paying lip service to the fans. Sadly, the video told us little we didn’t already know. Yes, they were tinkering with the genes of live polar bears. Now can you please stop asking about them??!! Nice touches, though. I liked Pierre Chang’s reference to using aliases, and loved the cameo from the infamous Hurley Bird, hidden inside a cage (and revealed by Chang to be some kind of hybrid species. Nerdgasm!). Also, it was intriguing to learn that Room 23 with its trippy video was used on captive Others whose memories were then wiped. Wow, good thing Alpert and the Widmore siblings never found out about that, or the Purge would’ve happened waaaaaayyyyyyy sooner. 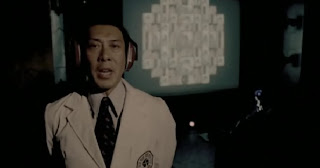 By the way, hats off to actor François Chau for playing Pierre Chang with such wit and gusto over the course of the show! Yeah, I know, the character was never all that complex, but Chau gave such a wonderfully deadpan, tongue-in-cheek performance that made all the orientation vids as entertaining as they were mysterious. Bravo!

So, with that loose end more or less tied up, Ben moved on to the good old Santa Rosa clinic, there to meet with another legendary Lost entity. Let’s all say it together, one more time:

I totally called it in advance, and was so damn happy to see I was right. Poor haunted, psychic Walt, unable to be happy or normal in a post-Island life. His appearance underlined the strange power the Island has over the people it deems important. Walt was suspicious of Ben, of course (it’s hard to be buddies with sketchy weasel-men who do experiments on you in rusty old labs), but so deep was his longing that he accepted Ben’s invitation. Now, we kinda have to suspend disbelief here. How likely is it that a random man can walk into a mental health clinic and be admitted to see an underage patient he’s not related to, and then just up and LEAVE with him? I mean, doesn’t Walt have a legal guardian? Well, maybe Hurley did some Island magic from the back of Ben’s van, where he was waiting to welcome Walt...and offer him a job. Hell, yeah! It’s so appropriate that Walt becomes part of the New Island Order. What could his job title be? Astral Projection Coordinator? Bird Control Officer? Official Dead Person Liaison? Whatever he does, it will be where he belongs. 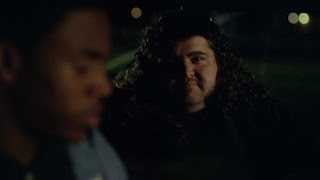 I loved how Hurley was dressed all in black. Rather different from Jacob, no? Lest we forget, Jacob’s ill-fated brother was always meant to be in charge. If this little epilogue told us anything, it was that things are balanced now, on track. Not perfect, but then, the world ain’t. And neither is Lost. But it’s still damn good, and it’s still damn wonderful to see one last hurrah from these characters. Personally, I feel quite confident knowing that the new man in charge is so laid-back about things, and that he has such interesting sidekicks!

Namaste.
Posted by Dang-Blasted at 9:09 AM