To Squee Or Not to Squee: Upside Down 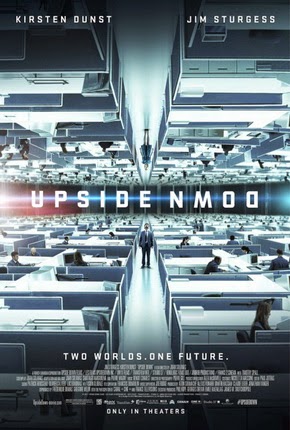 I’m not entirely sure what to make of Upside Down. It is just so goddamn EARNEST. It wants to be loved and admired. I mean, hell, it’s a love story! That’s also a science fiction film! With a strong sociopolitical message! I think one problem is that these are three different film genres clamoring for space in a single movie of average length. Me, I like the sci-fi parts best (though they have serious problems; we’ll get to that). I confess to being charmed by this film while admitting that it doesn’t quite work. Like Wes Anderson’s The Life Aquatic with Steve Zissou or David Fincher’s Alien 3 or Tarsem Singh’s entire body of work, this is a wonky film that alllllmost works because of its sheer creativity. I mean, you have to like a movie where the hero tells us, with a totally straight face, that the pollen from pink bees is used to make levitating pancakes. But it’s only creative if you ignore the plot.

The big problem with this sci-fi film is that it should have been a fantasy. It takes place on two planets which (astrophysicists, prepare to bite through your pipe stems) orbit side by side, so close they almost touch, each with its own gravity field. This means that the people of one planet can look up and see the other above their heads, inverted. And this, of course, raises a bajillion questions. The movie apparently takes place at the point where the two planets are closest. If they truly are spheroids, then they would gradually curve away from each other. So...what’s life like for all the people who don’t live at the junction? We never find out. Also, wouldn’t the very laws of physics grind both planets to pieces? And do they somehow share one atmosphere? Heck, at one point, the moon is visible. How can there be a moon that close to the junction? Wouldn’t its orbit cause it to smash into one of the planets? And since the opening narration establishes that these are indeed planets, does that mean it’s a movie about aliens? Aliens who look like humans and speak English with American accents? See, none of these questions would matter in a fantasy film, because fantasy has no need to explain itself. Upside Down errs when it applies real-world cosmology to an entirely impossible scenario. I love learning about the weird phenomena of the cosmos, but this is a fucking stretch. 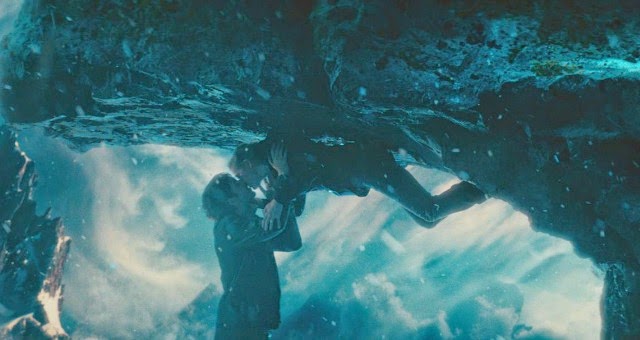 But never mind. The plot! We have two unequal societies, Up Above and Down Below (who the fuck named these planets?). The former is opulent and high-tech, resembling what the future looked like in the 1950s. The latter is a cross between a Terry Gilliam film and the London Blitz; life is hard for the Down Belowers, who must scavenge reverse-gravity material to make a living (this is dangerous, because objects on the wrong planet will eventually combust). Our heroes are named...ugh...Adam and Eden. They’re from separate worlds but they meet as teens, thanks to two kissing mountain peaks. The Powers That Be tear them violently apart, and ten years later, Adam (Jim Sturgess) is attempting to turn his pink bee pollen (snicker) into a cosmetic cream that will give consumers a very literal facelift. When he learns that Eden (Kirsten Dunst) works for a planet-spanning corporation called Transworld, he scores a job there in the hopes of rekindling their forbidden passion. Little does he know that Eden has Convenient Plot Amnesia, the terrible affliction that strikes movie characters who need to forget things so there can be, y’know, conflict and stuff. And the subsequent plot progresses along very familiar lines. Boy meets girl, boy loses girl, bad guys chase boy and girl, quirky supporting characters are quirky, fairy tale ending. Credits.

Upside Down has to sell itself on its special effects, and they don’t disappoint. Seeing the trailer was what got me excited, but I worried that the trailer showed the only good bits. Not to fret. The dual-world visuals are exploited to the max, and look astounding. They used every trick in the book to create their topsy-turvy aesthetic. The entire film is somewhat impressionistic, and definitely owes a lot to French surrealism; everything is dreamlike and heavily color-filtered (which, of course, further hurts the quaint notion that this is science fiction). From the creative, elegant opening credits to the inverted architecture...oh, yes, the movie’s a treat for the eyes. The gravitational magic trick never falters, and some effects are wonderfully subtle: when a man smokes a cigar on Floor Zero, the center of the Transworld building, the smoke roils in midair, trapped between the two gravity fields. Adam dons weighted clothes to help him move about Up Above, and when he removes them, he falls upwards and sticks to celings. There’s even a peeing joke. Watch Upside Down for the effects alone. 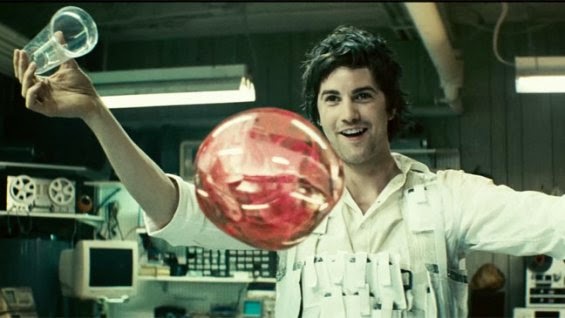 Just don’t expect much else. The rules of gravity may be constant but other rules are not. Contact between the worlds is so verboten that you could be arrested, have your house burned down, even be hanged for breaking the law...and yet, when the main characters are caught canoodling (more than once), they seem to get off scot free. Basically, story convenience wins out: Adam’s combustible antigravity clothes do not combust with any regularity, and Eden is of course destined to regain her lost memories at the exact point when it’s time for some backlit kissyface. Security is super-tight at Transworld, yet absolutely no one notices Adam scampering about after hours, doing highly illegal things with classified materiel. The subplot about Adam’s magical facelift cream could be its own movie, but it’s unclear as to how it works, or doesn’t work, or whether Adam’s trying to strike it rich, or whether he’s trying to stick it to the man, or where he keeps his secret stash of pink bees (snicker). The token third-act crisis when Everything Seems Hopeless is rather abruptly resolved, and the fairy tale ending is rushed and essentially discards everything that just happened, because TWOO WUV AWWAYS WINS, D’AWWWWWW. Blech. It’s romantic sludge in a setting that deserves better. Jim Sturgess also deserves better; the character of Adam is a stammering, giggling, abashed manboy with hair like a rat’s nest who is quite frankly a pain in the caboose. Kirsten Dunst is more lovable, but her Eden is so idealized she might as well be flapping her snow-white wings and tooting a golden trumpet. Luckily, the invaluable Timothy Spall is on hand to class things up as Adam’s friendly coworker. Nobody else in the movie is at all interesting.

In the end, is Upside Down a trippy sci-fi adventure? A Romeo and Juliet redux? A pointed commentary on the haves and the have-nots? A rags-to-riches tale about a boy and some pink bees (snicker)? It wants to be all these things at once. It’s best when its exploring the rules and physics of its world(s), worst when the characters are sticking their doe-eyed faces into each other’s personal space and spouting romantic goop from their pieholes. I know it’s supposed to be a timeless tale, and there’s a reason romance is always the top seller at Barnes & Noble, but that same reason is why Upside Down doesn’t quite work. Because it builds an amazing concept and then settles for the lowest common denominator. That said, I liked it. I recommend it to lovers of visually beautiful movies. Just...brace yourself for the DERP factor.

FINAL VERDICT: A squee for the effects and a big old raspberry for everything else.