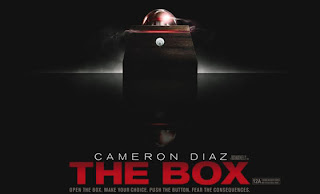 So, a husband and wife are given a box by a stranger. On the box is a button. They are told that if they press the button, they will receive a large sum of money, and someone they don’t know will die. After much skepticism, debate, and nervous pontification, they agree not to push the button.....but the next day, the wife pushes it anyway. Moments later, she receives a call informing her that her husband has died in a tragic workplace accident and she is being offered a widow’s comp identical to the amount promised by the stranger. Anguished, she calls him up and accuses him of lying. He tells her: “How well did you really know your husband?”

It’s like a weird joke with a ghoulish punchline, and it’s the plot of Richard Matheson’s short story, “Button, Button.” Good story. But I’m here to talk about The Box, Richard Kelly’s film adaptation of said story, which starts out the same but then takes a gleeful sideways serve into utter weirdness. Lest we forget, Richard Kelly made Donnie Darko, a film in which a giant demon bunny tells Jake Gyllenhaal to travel back in time and cause his own death, or something like that; a film that sits upon its own golden throne in Dante’s ninth sphere of Cult Movie Paradise. Richard Kelly makes weird, open-ended movies that force you to think, which means they have unforgiving niche appeal. I really liked Donnie Darko and I really like The Box, which got generally bad reviews and was scoffed at for being utterly preposterous. Well, of course it sodding is, people. But at the risk of sounding like a film-student douchebag (I’m not, by the way; my BA is in anthropology), I think y’all are just scared of a film you can’t explain.

Make that a film with multiple explanations and some sobering insights into human nature. The Box heavily references Sartre, who famously wrote that Hell is other people. By golly, he may have been on to something! The victimized couple are played by Cameron Diaz and James Marsden, two very attractive actors who are really good at playing nice. Boy, are they nice. You want to be their neighbors and get invited over for Thanksgiving. And since the film is set in the 1970s, our protagonists come equipped with awesome retro wardrobes, hair, and interior decorating that renders them sitcom-perfect -- except for her mutilated foot, and the fact that he’s a NASA employee who designed the camera for the Viking spacecraft. How intriguing. Into this sort-of-pristine household comes Arlington Steward, a charming and sinister man with grotesque burn scars, played by Frank Langella, who must be engaged in some sort of “charming and sinister” contest with Ben Kingsley. Steward gives the nice couple a box with a button, tells them that if they push it, they’ll get money and someone dies and blah blah. They debate, they’re skeptical, then the wife pushes the button, blah blah mcblah. Then they start getting stalked by zombie-people and uncover elements of a vast conspiracy involving NASA and the NSA and mind control and floating boxes made of water and BBBWWWWWUUUHHH?

I’d better not get into the plot because it contains many trippy surprises and is impossible to briefly summarize anyway. It has a great deal of ambiguity, which may explain the movie’s poor reception. When you sit down to watch a mind-bending thriller, the last thing you want is to be told, “Eh, figure it out for yourself.” The thing is, The Box doesn’t really withhold information. It gives us what we need to know. It just refuses to draw definite conclusions. There are two possible explanations for all the weird shit that goes down. The movie characters, being people of science and rationality, automatically go with the option that makes the most sense to them. But I wonder. Yes, it’s Faith vs. Reason, that ancient debate that fuels so many sci-fi plots these days, including Lost and the Matrix movies, both of which arguably fell victim to the “Figure it out for yourself” virus I mentioned. I was also reminded of The Taking, a sci-fi/horror/thriller novel by Dean Koontz (don’t laugh; he doesn’t always suck), which seems to be about an alien invasion but may actually be about....well, call it the alternative to an alien invasion. I am carefully circling the revelations that The Box has in store, because anyone who hasn’t seen the movie should have the chance to draw their own conclusions. It’s...more fulfilling that way.

So, it’s a well-made movie that, I feel, rises above its preposterousness. But besides that, I’m fascinated by the moral dilemma presented to the viewer, the one Matheson originally gave us in his story. I mean, what would you do if you could push a button and kill a stranger for money? How badly do you need that money? What exactly defines a “stranger”? If you never know who you just killed, how can you know whether to feel guilty, satisfied, paranoid, or anything? The original story implies that we build walls around ourselves, effectively rendering us a stranger to all, including perhaps ourselves. The movie isn’t quite that pessimistic, but it does carry a message about the responsibilites that come with free will. Just because you can doesn’t mean you should, especially when talking about the human race as a whole. But the “human race” is a faceless, generic entity to most people. Even good human beings have an inherent selfishness, a personal bubble to which they assign greater importance than all those strangers out there. It takes real courage to think and act.....outside the box.

You’d push that button, wouldn’t you. I think I would.

I almost wish that Kelly’s Box was more about the ethical struggle and less about sci-fi conspiracies and trippy special effects. Not that I didn’t enjoy the conspiracies and special effects; I totally dig that kind of stuff. But if the movie had devoted more time to the unspoken ramifications, the ethical paradox of the box and its deadly promise, then maybe it would have gotten better reviews, at the very least. It’s not quite ballsy enough to really explore its own themes. But, hey, just touching upon such profound brouhaha is better than nothing. I think if just one viewer is inspired to be a better person by the tale of the box, then that proves this movie has more merit than people seem willing to give it.