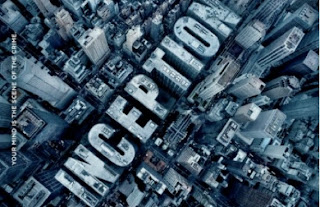 I fear it’s going to be difficult to write a review of Inception...not just because the movie is hard to describe and analyze (although there is that), but because it’s going to wind up sounding like every other review of Inception. To whit: this movie is awesome, it’s 2010’s first good summer movie for grown-ups, it perfectly balances action and brains, Christopher Nolan’s new name is Jesus McGhandiPope, etc. Okay, not all reviews have been that gushing or positive, but they all seem to consist of A) a sort-of synopsis, and B) an analysis, either of why the movie was amazing or why it was confusing and pretentious. Which I guess is the structure of all movie reviews anyway. Sigh. So, yeah, Inception.

I really, really enjoyed this film. I love movies that play around with my expectations of what a movie can do, and I find hope when a gem like this rises to the top of the lake of gray sludge and turds. All this silliness about making a parade of interconnected Marvel superhero movies doesn’t interest me, because it’s a gimmick that’ll only work if the movies are good, and what if they’re not? Story and characters come first, dammit! Movies are getting more and more gimmicky at the expense of quality (3D....ugh. I may disagree with Roger Ebert on video games, but I agree with him 100% on fucking 3D), so I appreciate a movie that actually cares about the often-neglected part of the human body that lies within the cranium. It’s called a brain; look it up! And if the film’s also a bloody good action thriller, hooray! Cherry on the sundae! Inception is an action flick that holds your attention from start to finish, thanks to riveting set pieces that overlap and interweave brilliantly. Because much of the plot takes place inside layers of the subconscious rather than the physical world, events in one dream-structure affect the deeper architecture like ripples in a pond. Reality becomes a malleable as wet sand. It’s beautiful and intensely entertaining.

Basically, the second half of the film is one of the coolest things I’ve ever seen on the big screen. I won’t spoil it too much, but I love how it borrows from the ghosts of action movies past, creating something wholly new. Everything is cool again! We’ve got the zero-G shenanigans from The Matrix, the crazy alpine chases from the James Bond universe, car stunts and smackdowns from the Jason Bourne school....and they’re all happening AT THE SAME TIME, on varying levels of dream-reality, each one stretching time out further and further, so that ten seconds for one dreamer is an hour for another. The way in which this is constructed and presented, and the way in which eight or nine characters are juggled within this puzzlebox of action and narrative, made me want to applaud. Now I’m finally going to mention the story and say that it’s about a group of mental hackers who are infiltrating a man’s mind in order to plant a very important idea. That’s the “inception” of the title, and trust me, I’m not even skimming the surface. Coiling beneath everything is the guilt and anguish of the lead character, Cobb, whose dead wife prowls through his and other’s dreams like a vengeful ghost -- which she is, in a way. These two people, played expertly by Leonardo DiCaprio and Marion Cotillard, are a stabilizing bolt driven painfully through the movie’s heart. It’s not about the inception mission, it’s about the most agonizing spiritual journey a man can make, and what’s waiting from him on the other end.

The supporting cast (Ellen Page, Joseph Gordon-Levitt, Tom Hardy, Ken Watanabe, Cillian Murphy, and Dileep Rao) are all really good, but their characters are basically tools to push and pull Cobb through the layers of dream, reality, and illusion. There’s an epic climax and a seemingly happy resolution, but the movie doesn’t let us off as easy as we hope, thank God. It seems inevitable that a film about shifting reality and dreams-within-dreams must end on a really, really, really ambiguous note. Boy, does it ever. The final shot is a sublime visual metaphor and it leaves you thinking that this might just be one of those films that wasn’t about what you thought it was. A lot of people will leave the movie going, “Wait, but wasn’t....and is he.....and how did.....and why is that......I DON”T GET IIITTTTT!!!” Well, first of all, if you weren’t paying attention to the dialogue, you’re fucked, because they actually describe the rules of the movie quite well. Secondly, this movie is meant to leave you uncertain of what you just saw. You have to do what the characters do and take it at face value. Be subjective! Inception makes us all dreamers, asking us what we think we saw, how we define what’s before our eyes. And it’s kind of wonderful. When the Ellen Page character learns how to control the dream realm and folds the city of Paris up like massive origami, she’s standing in for the audience, us viewers who have been handed something awesome and given the chance to play with it. The special effects are stunning, but for the most part they suggest possibilities rather than laying everything out bare. We can fill in the blanks.

I deeply respect Christopher Nolan, not just because he makes great action movies, but because his action movies are so....enlightened. They have a point and purpose beyond mindless fodder for the senses, but they’re not so pretentious that they abandon all the clichés and fireworks that we expect in a summer blockbuster. Memento, Batman Begins, The Prestige, The Dark Knight, and now Inception. They all cry out to be watched and digested over and over. If that scares people off, fuck ’em. They can watch Michael Bay with the rest of the sheep. I’ll take my action Nolan-style, always. Watch Inception. It is a great movie.
Posted by Dang-Blasted at 6:44 AM