Whimsical Games You Can Play During Your Lunch Break

The dictionary defines “Whimsy” as “anything odd or fanciful; a product of playful or capricious fancy.” This objective definition sort of hints at the general reaction of people to whimsical things. Kids love whimsy; adults, on the other hand, may either love it or want to bash it to death with a shovel and bury it forever beneath a rendering plant. Me, I find whimsy to be quite amusing and enjoyable, to a point. When it comes to video games, a dose of whimsy can make a good game even better (see: Psychonauts), but a full-length game drenched in whimsy might be a little much to take. Fortunately, the digital realm has room for small, indie programmers who make small, indie games in which whimsy is the whole point of the venture. Here are a couple such games, both of which I enjoyed a lot. If you’re looking to beat your boredom for an hour or so and the endless expanse of the internet just isn’t doing it today, you could do worse. 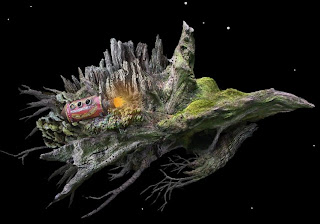 Samorost is the first game by Jakub Dvorsky, the main mind behind the Czech game company, Amanita Design. If you haven’t heard of these folks, shame on you; they just made their first mainstream release, Machinarium, an awesome point-and-click adventure that everyone should play and be charmed by. I may review it later. But before there was a city of robots, there was a small gnome in a white jumpsuit, kind of a spiritual brother to Saint-Exupéry’s little prince, drifting through the endless cosmos on an asteroid that looks like he made it out of stuff he found on the Jersey Shore. In the original Samorost game, the gnome notices that another asteroid -- this one resembling an aerodynamic chunk of driftwood -- is about to crash into his. So he flies over to the offending satellite, and the game consists of you exploring six different screens, solving puzzles to advance and ultimately divert the driftwood’s course. Yes, only six screens; the game is really, really short and goes by in a flash, but it leaves quite the impression. I absolutely love the graphics; they consist of little animated figures superimposed over surreal pre-rendered backdrops that are literally a photo collage come to life. It’s like Dvorsky cut pictures from magazines and scanned them; maybe that’s exactly what he did. The result is vivid, charming....and oh so whimsical. This teeny-weeny little game stays in your mind, not because of its puzzles (which are fun but simple, mainly involving you clicking on stuff in the proper order), but because of its cool and unique visual flair. 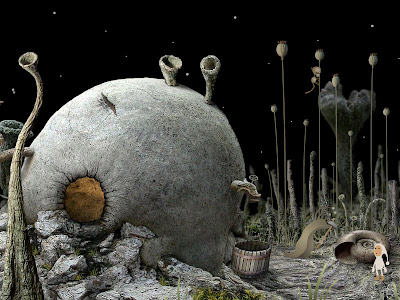 There’s a sequel, Samorost 2, in which the gnome’s dog is kidnapped by some sleazy aliens and he flies to the rescue. It’s a bit longer (just a bit), and continues the trend of quirky pre-rendered landscapes. The puzzles are also a little more complex, and require you to look closely at what’s on the screen; they have a fun Rube Goldberg quality that would later be put to awesome use in Machinarium. I feel like the sequel is paced kind of weird; it doesn’t end when you think it will, and although a longer game is never a bad thing, this one seems either too long or not long enough, I dunno. I’d love it if Amanita would make a Samorost 3, maybe one that takes advantage of their new mainstream cred and is actually a full-length game with more than two worlds to explore. Hell, if they win enough acclaim, they could turn this whimsical idea into the next Myst! Or maybe not. But Samorost and its sequel are totally worth checking out just for their visual charm and sense of eccentric humor. Check out Amanita’s site -- you can play the first Samorost and part of the sequel for free, though you’ve gotta dish out five bucks for the full Samorost 2. It’s worth it! 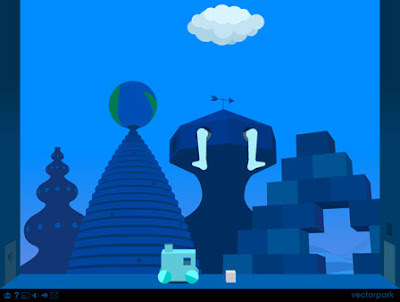 Windosill is a game I spotted on Steam, and as it was only $2.99, I tried it out. It’s very different than Samorost, but has the same kind of whimsical mindset. I don’t like it quite as much, mainly because it lacks any kind of story or narrative. Remember what I said about too much whimsy? Windosill almost crosses the line, but is saved because of its innocence and (again) extremely short play time. The goal of the game is to guide a small toy car through ten “windows.” The car stays on the sill at the bottom of the screen, and in order to unlock the door to the next screen, you must interact with the creatures, structures, objects, and landscapes before you. I’m being vague because it’s hard to describe what you see in this game; everything has an abstract feel, like you’re inside a child’s mind or a housepet’s idea of the world. This effect is enhanced by solid colors, simple geometric forms, and smooth surfaces on everything. The graphics aren’t as cool as in Samorost, but they have their own soothing charm. The puzzles are pretty easy, once again revolving around clicking on stuff in the right order, but they do encourage you to think and experiment. Windosill would be a good game for a child in the 6-9 age range, but these days, most six-year-olds are probably busy playing Modern Warfare, or kicking your ass in L4D2. God, I feel old.

Anyway, Windosill isn’t for everyone, especially not those who want their video games to have a purpose beyond killing time for twenty minutes or so. Also, Samorost and Windosill both have limited replay value because of their incredibly short length and relative ease. I’m still gonna play them again, though, because playing through a game like this once you know how to solve all the puzzles is almost a zen-like experience. And, dammit, these games are so bloody lovable. If you loathe the idea of a lovable video game, sorry. You’re probably a true gamer. I, on the other hand, am a shameless artfag, probably the textbook definition of the dreaded Casual Gamer. So I find these whimsical little games to be pretty awesome.

Sorry, Roger Ebert, but you and I must agree to disagree. Games can be art. The games I just reviewed, for instance. If you like seeing indie-minded creativity in action, play ’em. Despite their miniscule length, you won’t be disappointed.

Here’s the official site for Windosill; you can play the first half of the game for free, and purchase the complete game if you want: